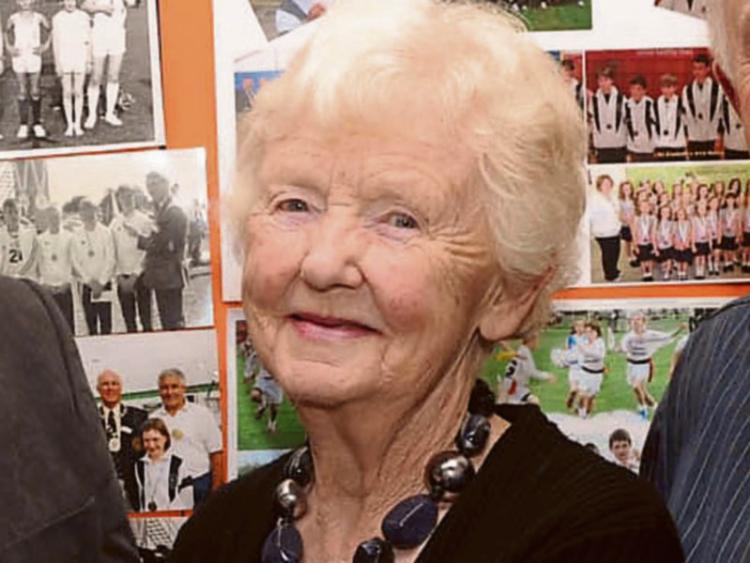 Nan Carey, who was the first principal of Scoil Mhuire in Newbridge

Scoil Mhuire Junior School celebrated its 40th anniversary last month with a series of events including a celebratory dinner for past teaching staff, which took place in the school on Friday, June 17.

It was attended by guest of honour, Mrs Nan Carey, who was the first principal of the new school.

Starting out with just three classes in the Senior School in 1976, the subsequent expansion of the population of Newbridge saw the number of classrooms increase to 16 by the time Mrs Carey retired in September 1997.

On October 1 of that year, Bryan O’ Reilly took over the helm from Mrs Carey.

Scoil Mhuire Junior has continued to expand over the intervening years, with the addition of extra Learning Support rooms, along with a Parents Room under the Home School Community Liaison Project.

The pupils in the junior school have been busy bees over the past month decorating the halls and corridors with artwork and this effort was reflected in the opening address to the 65 attendees on Friday June 17 by Board of Management Chairperson, Eileen Hall.

“On entering the hall, you may notice the figure of 40 made up of lollipop sticks. Each stick was lovingly decorated by an individual child and then all the sticks were joined together to make the number 40. It is a symbol of unity and creativity,” she said.

“Look to the ceiling at the paper chains. Each link in the chain represents a child, teacher, SNA or member of the office, cleaning and maintenance staff”.

Deceased members of the teaching staff were remembered with love — Eileen Kennedy, Kathleen Doolan and Marian Finnerty — as former Deputy Principal Evelyn O’ Flynn lit a candle in their memory at the start of the evening.

Mr O’ Reilly spoke of the concept of “your best self to replace the ideal of excellence”.

“That is a key characteristic of the spirit of the school. We are supreme artists at supporting children to be their best selves,” he said.

He spoke about the legacy that was handed to him by his predecessor Nan Carey, under whose caring watch this ethos was first nurtured and where a love of learning was fostered in its broadest interpretation.

Those in attendance were also told a Scoil Mhuire Alumni Trust is to be set up. In the early stages of development, it will provide resources, financial and otherwise, to meet specific needs within the school and can be emailed at scoilmhuireb@gmail.com

It was a high point of the evening when Nan Carey also spoke about her years as principal.

Mr O’ Reilly thanked all staff, past and present for their contribution.

“When you look at the etimology of the phrase ‘Go raibh maith agat’, it has a lovely meaning — May you have goodness. Go raibh maith agaibh for the caring, for the honesty of effort, the bringing of your best self. May the goodness of all that be revisited on you and your family for years to come. May that goodness continue in Scoil Mhuire for its future however long it will be,” he concluded.