Dramatic reduction in parking places in Naas over 20-year period 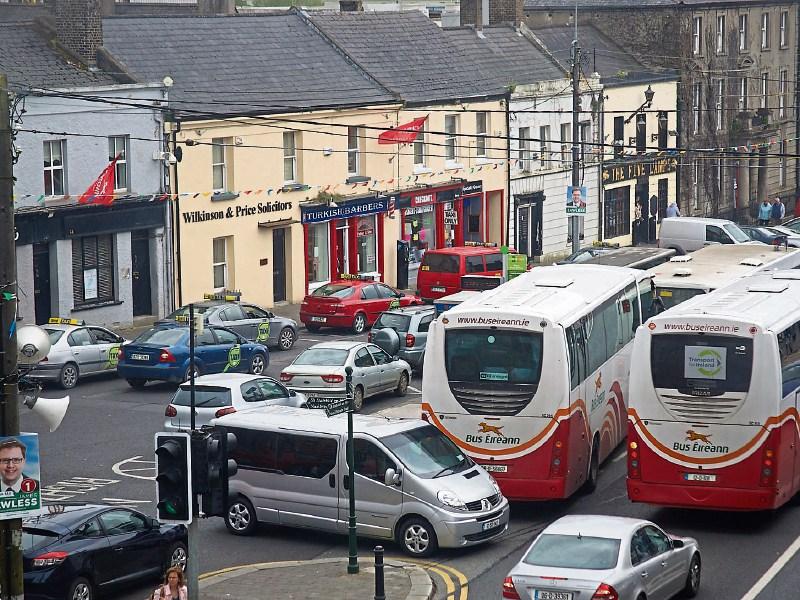 Almost three quarters of the car parking spaces in the centre of Naas have disappeared over a 20 year period.

In 1996 there were almost 200 parking places in Poplar Square, North Main Street and South Main Street, according to figures compiled by local councillor Seamie Moore.

This was augmented by the purchase of a piece of land between Corban’s Lane and South Main Street for a car park with 240 spaces as well as an additional 100 at Friary Road in the car park (which still exists) which was leased by the then Naas Town Council.

There were also another 50 spaces in areas like New Row, Rathasker Road, Kilcullen Road, Friary Road and Dublin Road.

The 240 space car park became the site for the unopened shopping centre and some 116 spaces were lost in the town by the introduction of elongated parking (as opposed to nose-to-kerb parking which is now considered dangerous because drivers are compelled to reverse into traffic ), pedestrian crossings, taxi ranks, bus stops, wheelchair spaces and yellow boxes.

Cllr Moore believes these figures represent a “huge reduction” in the room for parking along the main street.

He acknowledges that some businesses have provided their own parking and there are private car park - but these use clamping to enforce the rules and this practice has been criticised by Cllr Moore and other politicians.

Cllr Moore further acknowledged that there will be 700 car park spaces provided in the shopping centre - but nobody knows when these will be available.

“More parking spaces are needed and yet we’re approving proposals for the reconfiguration of Poplar Square which will mean that spaces will be lost.”

He said the town needs to rebrand itself as a clamp free town where the car parks uses barrier controlled exits instead of clamping vehicles.

Naas Town Manager Sonya Kavanagh told a Naas Municipal District meeting that there are plenty of car parks in Naas and Naas is not the only town where vehicles are clamped.

Meanwhile a Kildare County Council working group is examining the roads and transport issues affecting Naas with the aim of preparing a “comprehensive vision for the town.”

The Naas councillors will be involved in the process which will considers issues like parking, signs, public lighting, cycling plans access and disability awareness and Naas, the Age Friendly Town.

Other issues to be addressed will be access roads to Naas, access to the unopened Naas Shopping Centre side off Corban’s Lane, the movement of traffic at peak times, access to public transport and park and ride facilities.

This was a response to a call by Cllr Rob Power for a “parking communication plan” for Naas.

He said this plan should examine the potential use of signs in shops as well on the street and on line, providing information about where to park.

“The plan should work with private car park operators in Naas to examine the potential use of “live” information indicating where excess capacity exists.”

Cllr Power has complained that there is little visual information available motorists coming into Naas about the numbers and location of car park spaces.