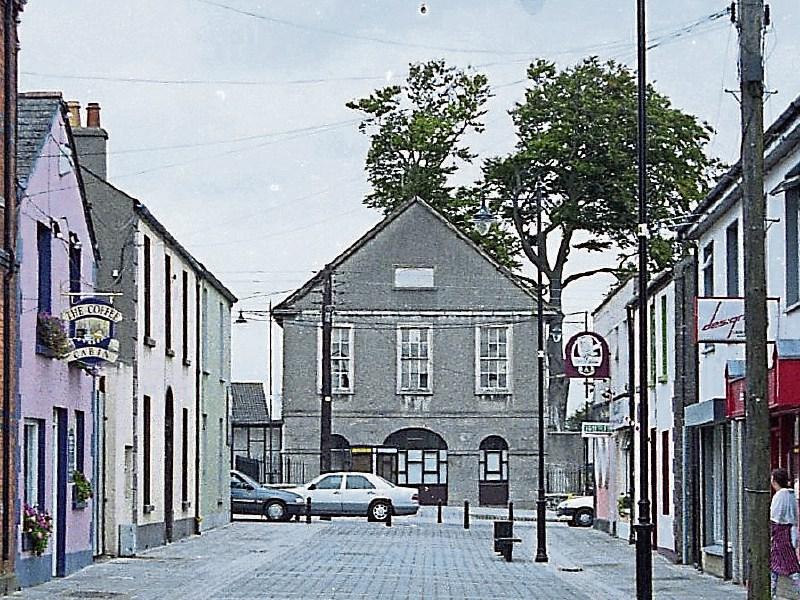 The former Newbridge courthouse, which burned down in 2002

“Why was the former Newbridge courthouse site proposed as a location for the skateboard park when the insurance money was drawn down for a replacement building?” asked Cllr Fiona McLoughlin Healy.
She told a recent Kildare Newbridge Municipal District that the site couldn’t be used for a skatepark because of that agreement.
The site was on the original list of proposed locations but an alternative site near Dunnes Stores was selected for public consultation.
She had asked officials for an update about the status of the site, including any plans that would allow the insurance money to be drawn down.
The council said that following a fire in the court house on April 4 2002, the council removed the remaining structures on the grounds of safety.
Because the courts service was reducing the number of courthouses, it was decided not to rebuild it. Because of this, a case was made to the insurers to recoup the costs incurred as well as recovering a sum under the insurance cover. Part of this was paid to the Civil Defence who had equipment stored at the courthouse which was destroyed in the fire.
“The settlement was arrived at on the basis that the council would, in time, deliver a replacement building on the site - hence the indication previously that it could not be used as the skatepark site,” it said.
It added that in the absence of any “emerging fundable programme that would see an appropriate building developed at the site”, the remaining money is being targeted as matching funding for the proposed library headquarters in Newbridge.
The building was insured for €591,000.
Cllr McLoughlin Healy said she had been informed €441,000 had been drawn down with €24,000 from that total given to the Civil Defence.
She asked if the remaining €150,000 was available to be drawn down. She said she had asked that the Director of Services with responsibility for these services to attend the meeting but she was disappointed he was not there to answer her questions.
Director of Services Tadhg McDonnell said that email was only sent that morning and the other Director had already committed to other meetings.
He said the report explained the issue and the question raised at the meeting was not the one that was originally asked and the report was prepared for the original query.
ADVERTISEMENT
Advertise with Us
ADVERTISEMENT
Advertise with Us
ADVERTISEMENT
Advertise with Us
ADVERTISEMENT
Advertise with Us