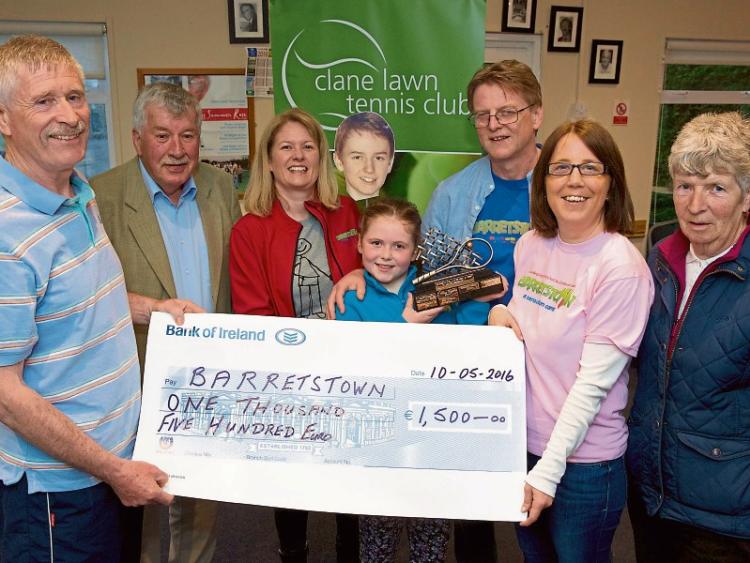 At Clane Tennis Club were Sean Lavin, Chairman; Paddy Behan, President; Orla Wallace with a picture of Ben; Ava and Kevin Wallace; Aine O'Doherty of Barretstown and Chris Rogers of the tennis club

We were lucky to have him, said Orla Wallace of her late son, Ben, who passed away last year at the age of sixteen.

Orla, her husband, Kevin, and their daughter, Ava, were in Clane Tennis Club recently for the presentation of a cheque to the Barretstown camp organisers.

The group, which looks after very sick children and their families, were delighted to get €1,500 as a result of a fund raising tennis tournament on March 16.

Aine O’Doherty, a Barretstown volunteer thanked everyone for their support, saying Barretstown relies on on support for €500,00 a year.

Ben Wallace died on June 9 2015, from leukaemia, following a brave and inspiring battle against the cancer disease.

Ben, from Caragh, and a student at Piper’s Hill in Naas, was, at the age of 14, the Clane Tennis Club U.18 Junior Champion.

He was very popular, said Liam Burke and Sean Lavin, from the club committee.

Ben was lucky to have them.

She told us the story of how she went horse riding and asked to ride a white horse and got one. She asked its name. It was Ben.

Orla and Kevin thanked Barretstown for its support from them and Ben.