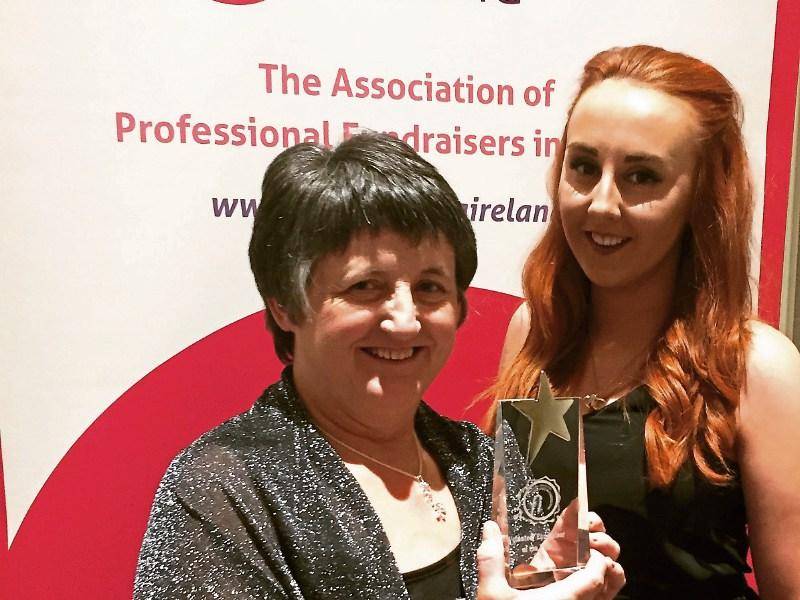 Mary Dunne and her daughter Eimear at the awards

Clane woman Mary Dunne has been recognised by a national fundraising body for her fundraising work with the Irish Society for the Prevention of Cruelty to Children.

Mary, well known to many in the area as organiser of the Clane Festival, was delighted with the recognition from Fundraising Ireland, not so much for herself, but for the ISPCC itself.

Mary was nominated by Paul Halpin at ISPCC along with a number of other charity fundraisers.

On April 8 she received an award for her work.

“My main concern is to highlight the work of the ISPCC and to thank everyone who has supported the cause through our fundraising,” she said.

The key question for those making the award was the basis on which the nominee demonstrated consistent excellence and significant results in volunteer fundraising.

Said Paul: “Mary Dunne is a Tour de Force, that is simply all there is to it.”

Mary works a full time job with Iarnrod Eireann, but in her spare time she pours every ounce of her energy into Community Events for ISPCC Childline.

A resident of the Firmount area of Clane, she has raised over €35,000 for the ISPCC.

She is also a native of Clane. Her father, Joseph, a Ballycumber, County Offaly native, and her mother, Mairead, from Limerick junction, both worked for Iarnrod Eireann and met on the job.

They had ten children, two of which, a brother and a sister, have passed away.

Mary’s late sister, Margaret, who died from cancer, was the first female student at Maynooth University in the mid 1960’s.

Mary was well supported on the award night by her husband, Cecil, and her children, Eimear, Niamh, Robert and Aidan.

Her ISPCC work began with a now annual fundraising breakfast. “The first one was at our house and some people still talk about it,” she said.

It grew and in recent years, it has been held at the Inquiring Minds creche. “They are so accommodating,” she said.

Her award nominee, Paul Halpin, said her initial work did not not include the various clubs, schools, businesses and crèches she has recruited to the cause.

He said: “Mary has been fundraising with ISPCC Childline since 2002, when she held her first Breakfast morning in aid of the charity.

“Since then she has recruited virtually every crèche, shop, bank, local business and school in the Clane region to the cause, nopt to mention Iarnrod Eireann and Kildare County Council.”

Mary also runs the Clane Festival every March (which also includes their St. Patrick’s Day Parade) whereby the proceeds of the event goes to ISPCC Childline.

Paul described her as a “one woman community fundraiser, who has created a region all to herself – and those of us in fundraising, know exactlyhow hard it is to get feet on the ground in communities.”

“She has recruited many local businesses in the region that we simply would not have been able to reach,” he said. “With her local knowledge, remarkable relationship building, and no little skill, Mary has recruited the likes of AIB, many crèches, construction companies, schools, retail outlets and the

“We simply would not have had as much of a presence in the Clane/Kildare region if it was not for Mary’s hard work, diligence, energy and enthusiasm.

Paul said Mary has directly contributed to covering the costs of 18 Childline volunteers per year, which covers 3,744 hours on the phone lines each year. “That equates to answering and astounding 162,136 calls from vulnerable children and young adults throughout Ireland been experiencing stress, abuse, violence, isolation, depression and anxiety.” He added that her work directly contributed to saving the Childline night time service which was under threat of closure in 2014.

“Through her advocacy work in the local community, she has spread the gospel of ISPCC Childline’ services. This has lead to children and young people availing of our services from the locality,

thus helping children throughout her community.”

He concluded: “Mary flies the flag of our Charity with pride, and we are proud to call her one of our fundraising volunteers.”