Frustration at lack of progress 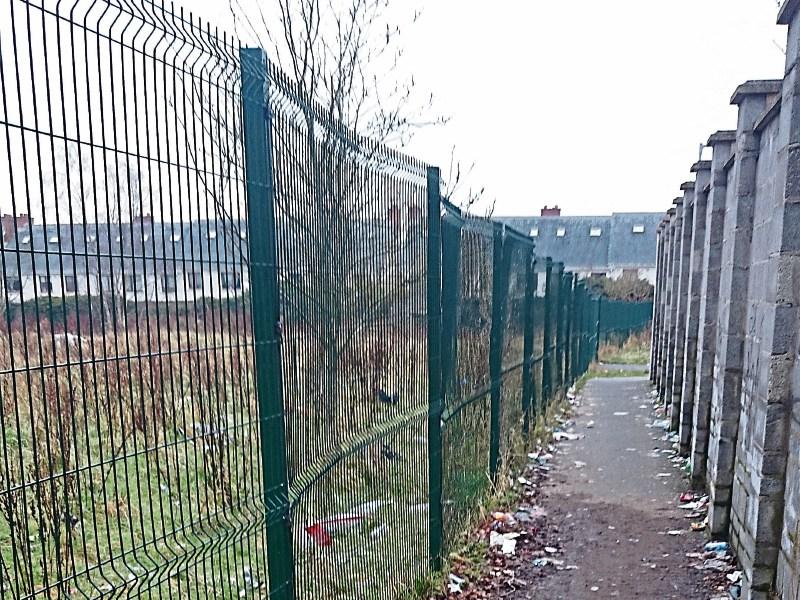 The walkway at Moore Avenue, Newbridge

“We suspect we will all be dead before this matter is resolved,” a Moore Avenue resident told the Kildare Newbridge Municipal District meeting on Wednesday, March 16.

Referring to the eight-year battle to get the controversial walkway closed between Moore Avenue and the Millfield Estate in Newbridge, she pointed out most residents are elderly, and may not be around to see it closed.

She said increased footfall has lead to anti-social behaviour, continuous rubbish dumping, and on-going drug abuse in the area. The meeting heard the walkway is being used as an escape route by criminals fleeing from gardai.

“We have letters of support from three Superintendents of the Gardai, on record with Kildare County Council,” she said.

Supported by a group of fellow residents in the chamber, she expressed their “utter frustration”. She said they had attended all relevant and non relevant council meetings, The High Court and spoke to various council officials over the past eight years.

“No proper permission was ever applied for, or granted for this walkway. It has subsequently been used by as many as 700 houses,” she said.

The spokesperson outlined how four years ago, the council said an alternative pedestrian access route to the town had been identified through the Industrial Estate and funding was in place to complete it.

A year later the oral hearing adjudicator acknowledged the walkway should be closed, subject to the alternative road being completed. Goodwill House took a judicial review to the High Court.

Then the residents were told following completion of the Dunmurray Road, their project was next on the list.

However, she said they had been fobbed off again.

The residents believe the council should replace “like with like”. Pedestrian access is already available through the Industrial Estate and just because there is no vehicular access, they believe this should not impact on the closure of the Moore Avenue pedestrian access.

Newly appointed Cllr Murty Aspell (FF)said he had been at a council meeting four years ago where this issue was discussed and he was astonished it had not been resolved.

Cllr Morgan McCabe (Ind) said he understood what it was like to live in an area where there was a throughway with residents being kept awake at all hours of the night by loud drunken passerbys.

Cllr Joanne Pender (Ind) acknowledged how the group of residents were regular attendees at the meetings. She said she remembered when they were told their work would come after the Dunmurray link Road.

Cllr Suzanne Doyle (FF) praised the dignified way the group had gone about their business and how they had gone through all the proper channels in the process.

“I am embarrassed that this has gone on so long,” she said. She stressed words were hollow and action was what was needed.

“I sincerely apologise that this has taken up so much of your time and I admire your dedication,” she added.

Cllr Mark Stafford (FG) said the situation hinged on the fact that the arbitrator specified the link road (through to the Industrial Estate) had to opened before the walkway was closed. He urged officials to get that road opened up as soon as possible.

Kildare County Council Director of services, Tadhg McDonnell said he would prepare a report, which would be circulated to the residents group.