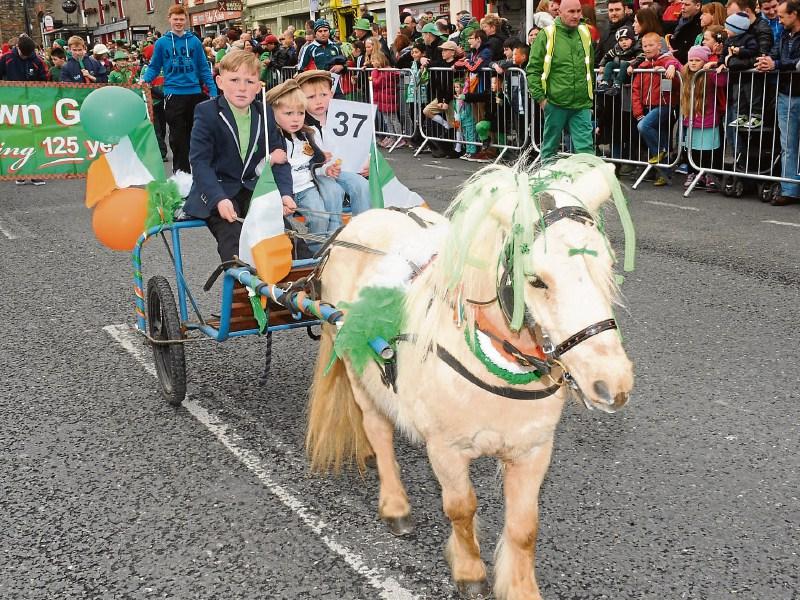 Fun at the Newbridge St Patrick's Day parade in 2014

St. Patrick's Day parades and celebrations will take place across the county this Thursday March 17.

The Newbridge parade begins at 12 noon and makes its way up the town from Tesco's and the Moorefield Road. This year's parade will have a 1916 anniversary theme and will have the usual mix of musical acts, impressive floats, army vehicles and community groups.

Meanwhile, Athy's parade will also adopt a patriotic air with the theme 'Life in Athy in 1916'. It starts at 3pm from the Kilkenny road. The route will go along William St, Duke St and Leinster street. Registration for floats will close this evening Tuesday, March 15.

Monasterevin is pulling out all stops for this year's parade, which is back after a notable absence last year.

While the parade kicks off at 2pm the festivities start at 12.30pm with a dog show outside the CYMS Hall

Local vet Des Groome will be judging the show and there will be lots of cute prizes.

Entrance fee is €3 per dog and all the proceeds will go towards St. Patrick's Day Parade 2017.

Not to be outdone by the cute dogs there is a baby show in the CYMS Hall, at 1pm the age group is from 0 to 2 years

There are lots of prizes for the babies/toddlers. There will be two judges for the day

Entrance fee is €5 per child and all the proceeds will go towards St. Patrick's Day Parade 2017.

After the parade everyone's favourite, Elsa from Frozen, will go on a walkabout while at 3pm there will be balloon modelling and face painting and a bouncy castle, and a Wheel of Fortune. The day will conclude with a duck race scheduled for 4pm.

Parade goers heading to Kilcullen are advised to get there before 11.30am to get a good viewing spot. Organised by the Kilcullen Scouts, numerous clubs, organisations and community groups will be taking part.

In Clane, the parade, which will feature up to 50 floats, will start at 3pm under the guidance of Grand Marshall, Marc Gibbs, who is well known for his involvement with Operation Transformation.

Leinster Leader photographer, Tony Keane will be out and about across Kildare to capture the magic of the occasion.