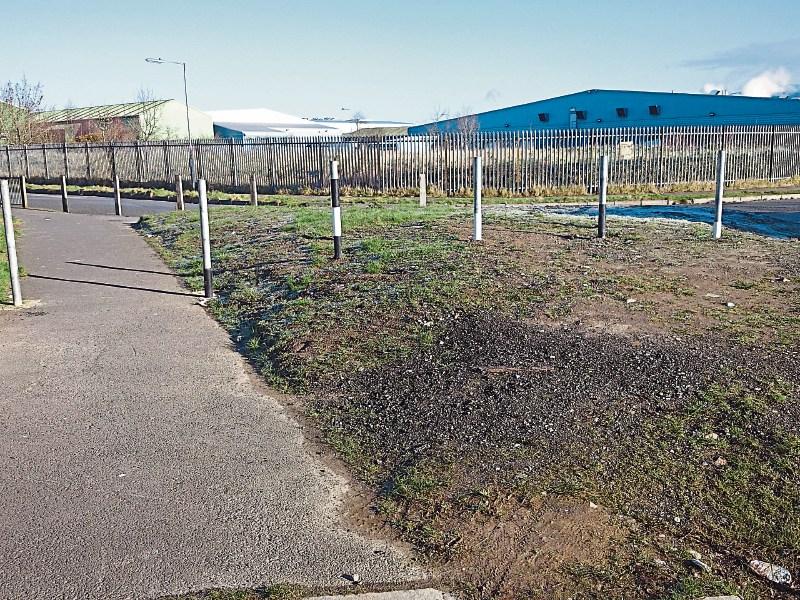 The mound of earth and bollards which block the link road from opening. According to the council, this is to be opened prior to the closing of Moore Avenue

Some of the residents at Moore Avenue in Newbridge have broken their silence in their eight year battle to get a walkway closed to their estate.

Drug dealing, broken windows, people urinating in the shrubs, rubbish thrown into gardens and threatening behaviour are just some of the problems endured by residents since the walkway opened ten years ago.

A passerby even tried to steal a wallet from one resident while he was out gardening.

“We understand that people need to have a way through from other estates, but there were other ways that could have been looked at. You don't send everyone from a big estate through a small estate with a cul-de-sac,” said one resident.

“We have been very patient and gone through all the right channels and the system, but its years later and its still not sorted. It's like herds of people coming from a football match into our estate. We have no privacy, people are looking into your front windows, the residents have to keep their blinds down all the time.”

Ten years ago, residents agreed to the walkway being opened to prevent construction traffic driving through the estate when three houses were being built. However, it was never closed once they were completed.

A group of residents have been campaigning for eight years to get it closed and have attended every monthly Kildare Area Committee meeting and subsequent Kildare Newbridge Municipal District meeting during that time to push for its closure.

In 2013 councillors voted in favour of closing the walkway on foot of a recommendation from an inspector's report. They were told it was not an approved walkway and was not part of the original permission granted in December 1994. Goodwill Housing Co-op Society Ltd. appealed that decision through a judicial review process. Their tenants as well as residents of Millfield and Curragh Grange objected on the grounds that it was in constant use and was the shortest convenient route to bus stop and shops. The alternative route of the link road through the industrial estate was deemed by them to be unsuitable and too far away. They said they were unaware of the anti-social behaviour problems.

Following the hearing, the arbitrator recommended its closure. The council said it now has to open up the link road from the Millfield Roundabout to Newbridge Industrial Estate before the walkway can be closed.

Today the walkway is tarmaced and lined by a wire fence lines. Rubbish is strewn the length of it.

“ We've even got a letter from the Garda Superintendent stating anti-social behaviour could be reduced if it was closed. In relation to the link road, it may as well be the Mullingar bypass for as much as it has got to do with us,” added another resident.

Every TD has raised the issue, and most councillors.

Cllr Suzanne Doyle said she had asked for a meeting to take place between the residents, and the area engineer before the March Municipal District meeting.

“The residents have been very patient. It has gone on too long and it needs to get sorted,” she told the Leader.