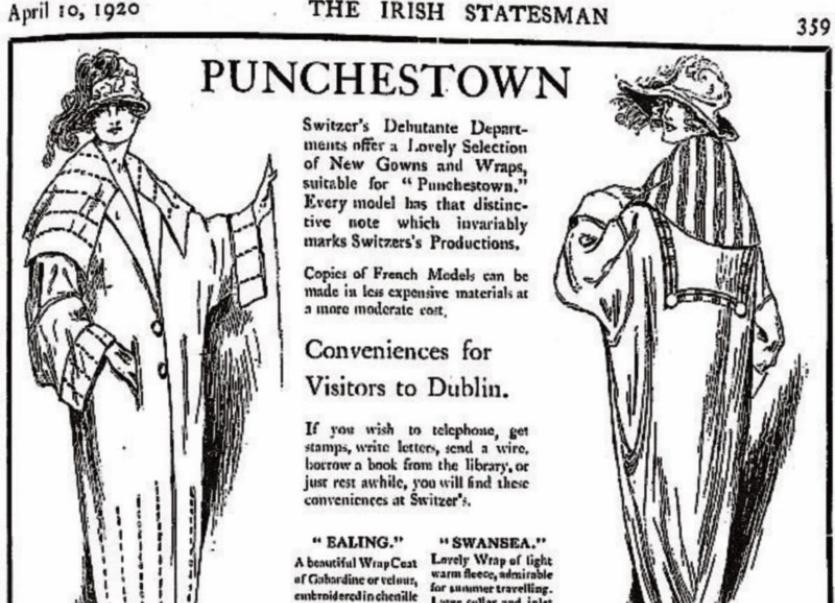 Switzers advertised their 'lovely selection of new gowns and wraps, suitable for Punchestown', in 1920

The cancellation of Punchestown this year due to the Coronavirus pandemic makes 2020 one of the few years in which the annual national hunt festival has not taken place. As it happens, the Punchestown races were cancelled one hundred years ago in April 1920 although for entirely different reasons.

The 1919 Punchestown races had not taken place as a result of the Sinn Féin campaign against country hunt meetings, including against the owners of Punchestown the Kildare Hunt Club. The 1920 Festival was all set to go ahead however, with the Leinster Leader of April 10 highlighting the pleasant and interesting programme put together for the traditional Walking Sunday.

The middle-class weekly journal The Irish Statesman also included an half-page advertisement for Switzer’s of Dublin Debutante Department and their ‘lovely selection of new gowns and wraps, suitable for Punchestown’.

Preparations for the annual festival were thrown into turmoil at the very last minute however, with the calling of a two day General Strike by the Irish Trade Union Congress and Labour Party very late on the eve of the races. The strike was due to begin on the opening Tuesday morning of Punchestown. This nationwide strike was in support of republican prisoners then on hunger strike in Mountjoy Jail in Dublin, with Ed Malone of Dunbrin, Athy, among those on hunger strike.

The General Strike organised by the labour movement brought the country to a standstill and crucially for Punchestown it meant there was no rail transport available to bring patrons to the races.

The sudden abrupt calling of the strike initially resulted in much confusion, with many visitors having already travelled to Naas in advance. The Kildare Observer of 17 April reported that “visitors to Naas found most of the workers of Naas walking about idle, indulging in a sort of melancholy festivity. They had been ‘ordered out’, and out they came to kick their heels about the town instead of enjoying themselves, as they would no doubt otherwise be, on the racecourse.”

Apart from the stopping of public transport, the nationwide strike saw pickets on shops to ensure they stayed closed along with public rallies across the country.

The labour movement ensured that the strike was strictly adhered to, with the Naas branch of the Irish Transport & General Workers Union reporting to senior union official William O’Brien in Dublin that: “The first day it was impossible to get the shops shut owing to the big crowd from Dublin… [for the races]. At any rate we marshalled our forces yesterday morning and closed every place: banks, shops, solicitors, offices etc.

“A picket of our fellows paraded the town armed with bricks, sticks etc. (not with our consent) and if a shop had dared to open there would have been murder… There must have been 1,000 in the procession. The oldest resident admit that they never saw anything like it in Naas before or so well organised.”

These scenes were replicated across the entire country, with transport and commerce coming to an abrupt halt.

The Kildare Hunt Club were left with little choice but to abandon Punchestown for 1920 as a result. They had initially tried to delay the racing festival until later that week, but this changed once the widespread disruption of the strike became apparent.

The Leinster Leader reported that stable lads at the Curragh appeared to partake in the strike also, by refusing to handle any horse for Punchestown!

One group who benefited from the cancellation was the publicans of Naas. The commentator in The Kildare Observer of 17 April remarking that “The ‘pubs’ did a roaring trade… it’s an ill wind that blew hundreds of country folk into Naas on Tuesday with the object of attending races which had been postponed by wire to the papers at two o’clock the previous morning”.

This prolonged by a day “the harvest period” of Naas publicans. Unfortunately the last minute cancellation was a disaster for other traders, vendors and jarveys who had expected a bumper trade for the races but were left with unwanted foods, goods and wasted journeys instead. It was even noted that one lady had boiled thirty hams and prepared a great deal of other food in anticipation of making a tidy profit, all to no avail!

The General Strike itself was a success, with the British military caving in and releasing the prisoners in an humiliating capitulation. This was a rare example of how mass mobilisation and the efforts of the labour movement could combine to defeat the British authorities without resorting to guerrilla warfare.

Although it was a global health crisis that caused the cancellation of Punchestown this year rather than political conditions of 1920, it should be noted that the 1921 Punchestown Festival did go ahead. This is something to remain hopeful for next year!

James Durney: The War of Independence in Kildare