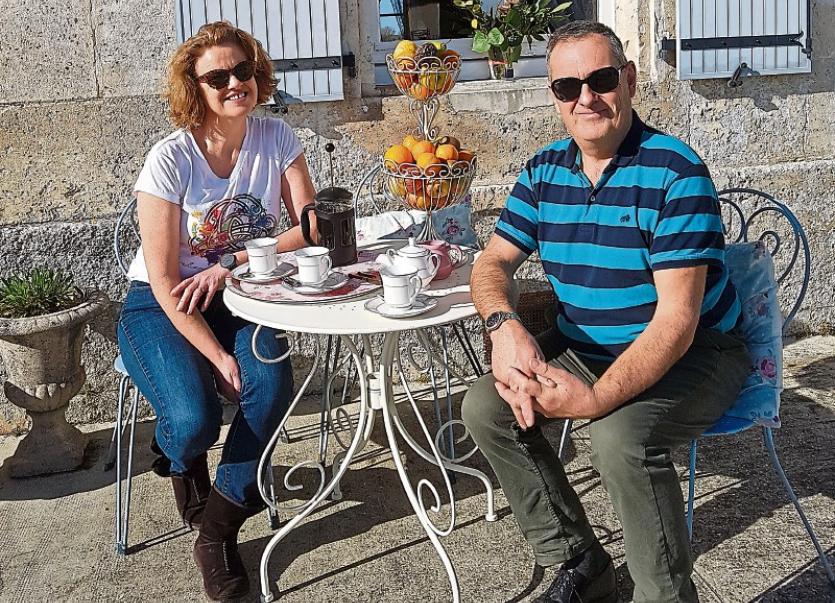 Naas man Charlie Ganly, who left for France with his partner Olive Towey a year ago, is now running a country house in the Cognac countryside, offering visitors the chance to enjoy the best of the beautiful French countryside.

Tired of the long commutes and dark evenings, the pair embarked on an adventure with an open mind — ready for a break but also keen not to be too ‘planned’.

Charlie, who runs his own successful plumbing and property management business, was “ready and willing” to join Olive, who has worked with aid agency Concern Worldwide for the past 15 years and took a two-year sabbatical.

Initially they were house-sitting for the summer in Provence, followed by six weeks looking after a large property in Carcassonne.

While there, they were approached to run a wonderful B&B near Bordeaux and when they arrived at ‘Aulagnes’ country house they were bowled over by both the house and the countryside.

In the heart of the Cognac region, set amongst rolling vineyards, the house has been lovingly and tastefully restored by the owner, offering a host of elegant spacious rooms, each with idyllic vistas in every direction. There’s a large swimming pool, BBQ area, games’ room and large barn which is used for parties, movie nights and more.

“My son Jeff who works in the Naas Meadows & Byrne outlet came to visit recently and was blown away by the scale and beauty of the location along with the very relaxed lifestyle,” said Charlie.

His visit was timed to coincide with a French-style barbeque which Charlie had organised for around 30 local friends and neighbours.

Since their arrival September 2018, Charlie and Olive have had 190 people through the doors and the reviews have been extremely favourable.

A number of friends from home have also visited including several of Charlie’s clients, who returned home after a “most relaxing vacation at Aulagnes”, said Charlie.

Charlie and Olive are offering an autumn programme of mindfulness weekends with all details available on www.ceangal.eu The next weekend will take place September 5-8 with reduced rates applying until end of this month.

The couple are also hosting a bridge club in September, a yoga group in October and a book club in December.

“We are here because we wanted to take time out, to step away from the routine for a while, to create space and allow things happen — an approach which has so far paid off.

"We now also have the opportunity to offer others a chance to take some precious time away from the daily routine to reconnect with themselves,” said Charlie.

For more information on Charlie and Olive’s adventures and weekends visit www.ceangal.eu