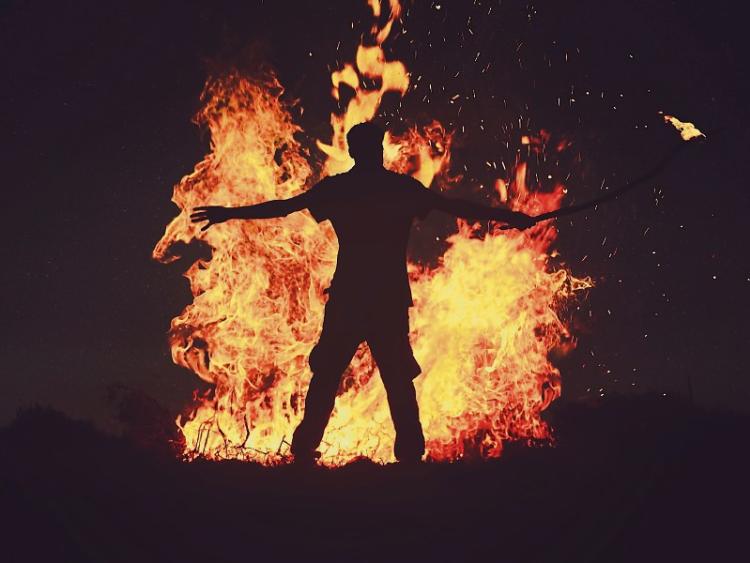 Ordinarily, you’d never link a supermarket trolley to Halloween. But in Naas in the ‘80s these steely, wheely vehicles were the ultimate bonfire tool.

Pallets stained with creosote. Others painted blue and designed to slip neatly into the blades of a forklift truck were just too heavy to carry by hand all the way from Naas Industrial Estate.

Better to load them on a trolley and then stack them like an Indian’s tepee. I was never surprised to see the mountainous bonfires built in the North every July 12. I understood that bonfires had to be bigger for the same reason that the Empire State Building had to be taller than the Eiffel Tower.

Everyone knew the bigger your bonfire, the bigger balls your housing estate was credited with having. Most years Ballycane had the biggest. From the wall of the CBS it was possible to see the flames of their fire licking the dark of the night.

The bonfires in Roselawn and Rathasker were butter knife blunt by comparison. And Halloween was more about noise than fireworks exploding into beautiful colours. That, and barking dogs. Shrill screams. Sirens. Air bombs. Air bomb repeaters!

READ ALSO: Have fun with the kids in Kildare this Hallowe'en

And yellow coloured cigar-like sticks of dynamite, carried about by parka jacket-wearing youths clad in black balaclavas, rolled up to look like skull caps.

We didn’t know it then but almost certainly we shopped in the same stores as the IRA and other republican subversives living south of the border, all with a liking for military wear out of Army Bargains, and Millets on Dublin’s Mary Street.

Every teenage Hallowe'en started around there and around the back of the Ilac Centre, where cash deals for fireworks were made with ronnie-wearing Dubs dressed in blue shell suits.

That’s all anyone was interested in — tools of destruction that made old distractions like toffee apples and that apple in the basin game redundant. And the town’s retailers used to do a run on caps for cap guns — the small thin strips of gunpowder that came in a red roll. “Ten packets please!”

“TEN! That must be some gun yis have,” joked Mrs McKiernan.

But the 80s was the era of the Penny Banger — made from caps folded down the middle and sellotaped around a coin. And while we looked like we might be carrying Armalites, they were just long pipes to launch Squealers that exploded into dog barking symphonies.

A tome of spooky stories used to get resurrected of course: from the old house where the light never went off on the way to Clongorey, to strange lights spotted on Curragh at dusk. But now, to the best of my knowledge, the fabled Jack O’Lantern never wandered from his place in national folklore into the boundaries of Kildare.

And you’d be waiting for the listings of the RTE Guide to be published to see if the scheduler had planned for another repeat showing of Hallowe'en, or was it Hallowe'en Two, just to keep us guessing. Or maybe even some corny Hammer Horror film like Vampire Circus.

READ ALSO: Remembering Kildare in 1983: From the Irish RM to the bypass

We nervously laughed off tales about the man who said the Hail Mary backwards ten times into a mirror at midnight, and by doing so invited the Devil himself into Kildare. But I'd dare anyone to attempt it, even now!

Bizarrely, the closest any of us got to a supernatural act on Halloween was when a small sum of money was taken from a friend's house, during a free gaff. All early enquiries led to nothing until someone came up with the idea of using a Ouija Board to find out.

I surrendered my place at that table when the investigation deemed it necessary to rope in dark spirits and not local detectives to get to the bottom of the crime. We waited tentatively nearby to hear what the board had to say about who'd taken it.

I remember people storming out of the building, not gripped with fear but the confidence of a trial lawyer who'd discovered conclusive evidence that damned the plaintiff.

Whether it was the Ouija Board or not, I’ll never know, but the process did lead to the money being returned, and regrettably, most years the supermarket trolleys never were. But then, in keeping with the occasion they ended up in a shallow grave of bonfire ash.