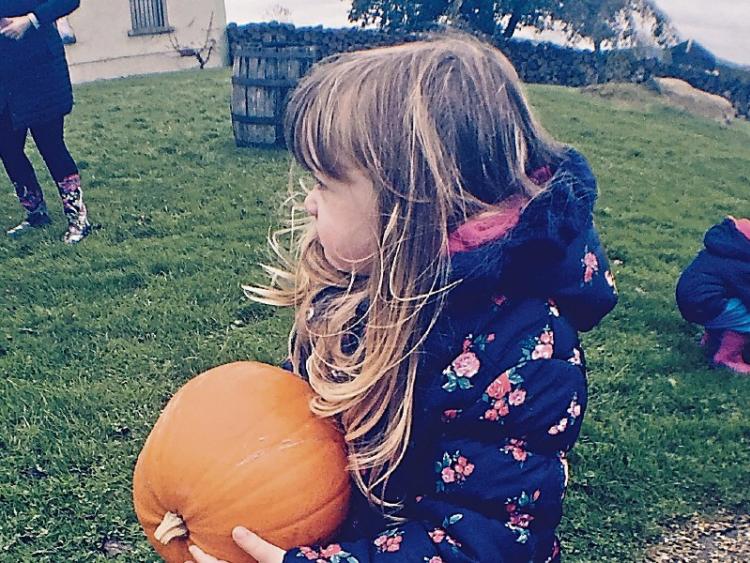 Sarah and her pumpkin at last week's fancy Hallowe'en event

I’m turning into my mother. Now there’s a sentence I never thought I would write! It’s a natural progression I guess, she taught me a lot of what I know, after all.

Last weekend we took Aidan and Sarah to Rathwood in Carlow for a Hallowe'en Pirate Adventure event. They went on a train through the spooky woods, saw skeletons and gravestones along the way and finished their afternoon off by carving pumpkins.

It was nothing out of the ordinary. In fact families the length and breath of the country will be attending similair events over the coming days.

My mam rang for a catch up on Sunday evening and she asked how our weekend was. Naturally I told her about the Hallowe'en event. Her response? You guessed it, ‘there was none of that in my day!’

There was actually none of that in my day either. We went trick or treating to the two houses next door dressed in bin bags, binged on monkey nuts and maybe, if we were very lucky, hired a scary video for the night. That was Hallowe'en in rural Co Meath.

I’m aware Hallowe'en in urban areas was a tad more exciting but I don’t think the children of my generation had it as good as the kids of today do.

First up I don’t ever recall seeing an actual pumpkin in the flesh when I was a child. I spotted them on the television on American shows such as Blossom but that’s as close as I came to them.

And as for decorating the house up for Hallowe’en, well it just didn’t happen. Period. The decor remained the same except for Christmas, and Hallowe’en was over as quick as it began. I certainly wasn’t carving pumpkins at a special event down the country.

Actually Christmas was the same. Naturally the house was dressed from ceiling to floor in tinsel but my parents didn’t spend a small fortune on taking me to special events to see Santa like we do with Aidan and Sarah.

Since I became a mother I have brought the kids to see Santa in Lullymore, Palmerstown House, The Clanard Court Hotel and Causey Farm in Meath. None of the above come cheap, I can tell you.

There was none of that in my day! Nine times out of ten I went to see Santa in Navan Shopping Centre. In my early years I remember seeing Santa in my local GAA Club, Walterstown, at an event that they called the fancy fair. Believe me, there was nothing fancy about it!

Throngs of us local kids packed into the club hall and watched Mary and Paddy from down the road snap up raffle tickets in the hope of winning a turkey or a ham. I also recall bingo being played at the fancy fair. It was a great day because I was allowed copious amounts of Club Orange (my dad used to buy the big litre bottle and keep me topped up) and Tayto.

The highlight of the fancy fair was the arrival of Santa. All of us local kids would squash up beside each other at the window and wait for the big man to appear. The holy excitement when he finally arrived was unreal. Then he came up the stairs with his big sack of goodies and that’s when you felt the disappointment. Nine times out of ten Santa was played by one of my uncles or my best friends’ dad!

Nonetheless, I was always over the moon when Uncle Santa gave me a selection box. We were easily pleased back in the day!

Then ‘Santa’ would take off the fake beard, prop himself up on a bar stool and proceed to get out of his tree for the rest of the evening. There was none of that in Lullymore, Palmerstown House, in The Clanard Court or Causey Farm, I can tell you!

Kids these days are just spoiled rotten. Us parents, well most of us, buy in to all these fancy events. I feel like they are missing out if they don’t go to a Hallowe’en event or a bells and whistles visit to Santa. What are we like? We are a marketers dream!

I love to see the joy on their faces but there’s also a part of me that would like to return to the days of the fancy fair in the local GAA club with a rubbish Santa!