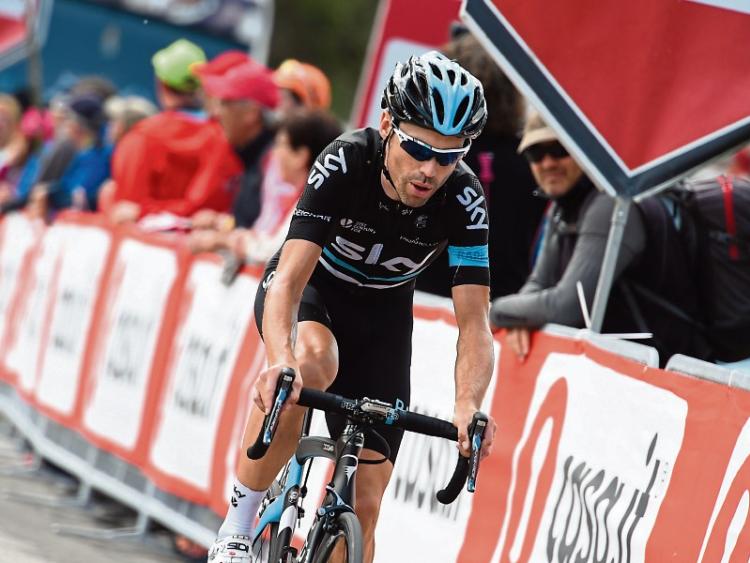 You know when you’ve done the two gaps, Sally and Wicklow and you’re in that sort of no man’s land between Valleymount and the N81 heading home.

The legs are probably a bit on the tender side seeing as you’ve done all your big climbing and efforts for the day and at this stage you’re just pootering along, winding down on the run into Blessington.

Well, there I was one time, riding solo, having done just that, in me own little world, happy out and looking forward to the post-cycle coffee in Blessington when another cyclist passed me.

He didn’t pass terribly fast, and he wasn’t even out of breath. “How’s it going?” he said, with a Donegal accent.

I recognised the familiarity of the voice, the face, the kit and the bike, but it took another half second to realise who it was. It was Philip Deignan, who at the time was riding for the United Healthcare, probably the biggest domestic team in the US.

I tried to catch up with him, half to see what speed he was doing, and half to chat to him. I achieved half of that ambition. He’s was cruising along at 35kph, something my legs weren’t up to for long at that stage.

So once his speed had been established I fell back — and by the time I got around the next bend, he was nowhere to be found — I suspect he had taken the left hand turn for Tulfarris/Poulaphouca.

At that point, Deignan had won a stage in the 2009 Vuelta Espana and finished ninth overall that year. And the during the course of his two years with Uniter Healthcare he won the Tour of the Gila and recorded a top ten in the Tour of Utah, Tour of California and the USA Pro Cycling Challenge.

I was struck at his simple friendliness, considering that there is, shall we say, a slight sense that among some amateur racers the common courtesy of exchanging pleasantries don’t apply if one is cycling past mere mortals. Maybe he’s less insecure in his abilities. He could teach a few a thing or two.

Anyway, this all occured to me last Wednesday afternoon after word emerged of a new contract he had signed with Sky team. This is his third contract with Sky and will represent his fifth year with the team.

He is strictly in a domestique role there, which is both a pity because he’s well capable of pursuing GC results and entirely inevitable on a team that has Chris Froome, Gerraint Thomas and Sergioe Henao.

There’s been much talk of whether he should move to a new team or not. It might give him greater scope to go for his own glory — or indeed to compete in the Tour de France — something he has never done.

Certainly there are numerous nother teams where he would easily make their Tour de France teams, but Sky is so jam packed with talent that it’s even hard to be one of the best domestiques on it.

So you see him in week-long races and the Giro and even sometimes in the Vuelta. That’s the way it goes.

All that being said, it’s a great team to be on and he’s probably better paid as a domestique on it than he would be on other teams — not that money is everything, but when you’re in your early to mid-30s and newly married as he is, and approaching final years of a career, then the future must be considered.

His wife is Lizzie Armitstead, a former world champion and Olympic silver medalist (in London), and generally one of the top female cyclists in the world right now.

Deignan is one of the most low key of all the Irish cyclists competiting at the top level.

Cousins Nicolas Roche of BMC and Dan Martin of Quick Step (and next year UAE) are always threatening in the big races, Dan Martin more so that Roche.

Sam Bennet is flying this weather, winning four out of the six days of the Tour of Turkey two weeks ago, and if he hadn’t over cooked the last corner might well have made it to five. His total of the year was 10 and his position as one of the world’s top sprinters is secure.

Elsewhere, we have Ryan Mullins who, although young, is considered to possibly be the next Tony Martin/Fabian Cancellara and is moving to Trek Segafrado from Cannondale Garmin for next season.

And then there’s the Aqua Blue team which has a plethora of great Irish riders — Matt Brammeier who is a three time national champion, Martyn Irvine who is a former two-time world champion on the track and Conor Dunne who has to be a fan favourite, given his inability not to attack and get into breakaways — someday, the odds are that something is going to stick for him.

And another aggressive cyclist who is joining Aquablue is Eddie Dunbar from Cork and who had two great years in a development team in the US, including winning the under 23 version of the Tour of Flanders.