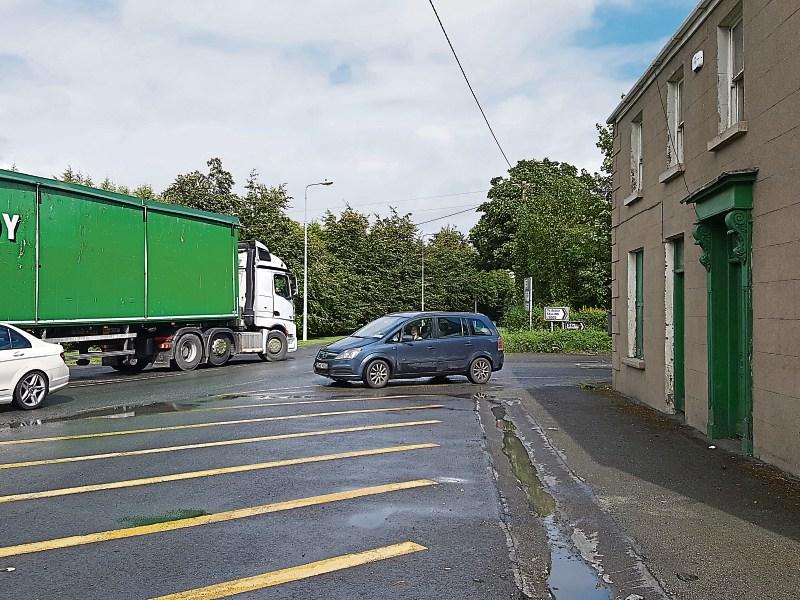 HGVs are a common site on the small, local roads of Co Kildare

Residents in the Millicent area of Clane are worried about heavy traffic and new plans to increase capacity at the Drehid waste facility in west Kildare.

A number of local meetings have been held recently.

There is also concern that a further application involving hazardous waste at the site.

In a response to the Leader, Bord na Mona said, in summary, that there is a shortage of landfill capacity and so Drehid needs to take more.

Residents living on the L2002 at Millicent, Co Kildare, said they are seeing increased flows of traffic on the local road.

They are worried about the noise and increased risk of accidents — there have been several in recent month according to Cllr Padraig McEvoy.

A local resident, Clane businessman, Robert Volkamp, said among other things that speeds limit is still at 80kph for 45 tonne trucks even though the route has accident black spots clearly sign posted and is an L (local) route.

He said they estimated truck numbers are 300-400 passes per day.

One of the residents living on the narrow road is former Minister Charlie McCreevy.

Mr Volkamp said the bridge at the McCreevy house is cracked.

Mr Volkamp said his son, who has a condition, still cannot get the required rest he needs in his home and they have had to move him to Tullamore to spend time with his grandparents where he can get rest.

Maynooth District Cllr McEvoy said Bord Pleanála should satisfy itself that due consideration has been given to the “very real concerns” identified by the residents along the L2002 when assessing the suitability of this road as a haul route to supply the Drehid Facility.

Since the grant of permission, some of the haul routes are no longer suitable and HGV trucks have been restricted along these routes, mainly due to the presence of vulnerable protected structures, such as Caragh Bridge route.

Cllr McEvoy said that in further extending the capacity, the Bord should satisfy itself that the applicant is fully compliant with conditions of the existing permission.

Cllr McEvoy said there have been ongoing discussions on Kildare County Council’s ability to enforce the approved haul routes for trucks using the site.

He also said: “It appears that there may be a difficulty in establishing that there is compliance with condition 13 in respect of payments towards the cost of maintaining the road network. This may stem from a lack of clarity on the developer’s side regarding their obligations in respect of a condition.”

He also said Bord na Mona should be made to a regular cleaning of the haul routes.

Asked about the Millicent Road, Bord na Mona told the Leader: “It part of an approved haul route for the Drehid Waste Management Facility. Following the closure of the Caragh Bridge (to HGVs), Kildare County Council erected signs at various locations to highlight the availability of alternative routes. The signs erected at each end of Millicent Road have the potential to give the impression that HGVs are being diverted along Millicent Road rather than advise that it is an alternative route. This has the potential to disproportionately increase the volume of HGV traffic on Millicent Road.”

Bord na Mona told the Leader on March 10 2016, all Local Authorities simultaneously and collectively invoked their powers under Section 56 of the Waste Management Act, to make Orders specifically in relation to making arrangements for the activation of all immediately available landfill capacity until June 10 last. It said there is a backlog of waste as there appeared to be stockpiling of waste at licensed sites.

“Separately, the EPA issued a Technical Amendment to the Waste Licence to permit Drehid to accept 360,000 TPA (tonnes per annum) for disposal to landfill, until December 31 2017, reverting to 120,000 TPA thereafter.”