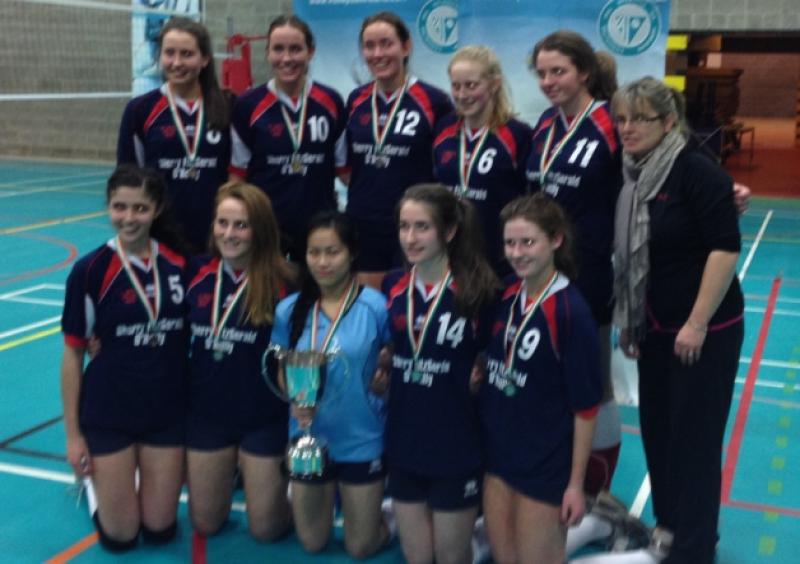 The recorded a straight sets victory over Holy Family Secondary School, Newbridge in the Belfield venue.

This was the second time in 2013 that Mary’s emerged victorious from a showpiece encounter with Holy Family, as they previously overcame their near neighbours in the All-Ireland Cadette Girls decider in the same setting back in March. Although their 2-0 success in that fixture was also fully merited, they were even more impressive in their final game of the year, with both Aisling Clancy and Sarah Benn producing excellent performances on the day.

However, it wasn’t always plain sailing for the Mary’s girls, as a misdirected volley by Karen Benn ensured that Holy Family opened the scoring in the first set. A similarly wayward Newbridge serve soon brought parity to the contest, but even though a powerful serve by Clancy did garner a point for her side, Holy Family showed their intent by registering four points in quick succession.

Terrific work by Wiktoria Wnek and Amie Langrell helped them to build momentum during this juncture, and they maintained their three-point lead when Sylvia Power and Karen Benn scores for Mary’s were cancelled out by a brace from Holy Family.

Yet, just when it looked like Newbridge were hell-bent on gaining revenge for their springtime reversal, Mary’s suddenly kicked into gear with a magnificent haul of ten points in succession. Wing Sarah Benn amassed four points during this spell, but Naas also had key contributions from Aoibhinn Cassidy (three), Clancy, Cliodhna Duffy and Karen Benn.

Holy Family did finally halt this scoring sequence with a well-measured brace from Wnek, who was equally adept at volleying into enemy territory as she was at providing serve. Unfortunately for Newbridge, Mary’s were starting to operate at the top of their game, and a trio of fantastic volleys by Karen Benn (who was MVP in last year’s Senior ‘A’ All-Ireland Final) ensured that they opened up a significant 19-10 cushion.

Holy Family did briefly raise hopes of a late set revival when points by Langrell and Maja Lalowicz, as well as some uncharacteristic Naas errors, reduced their deficit, but thanks to Cassidy and Karen Benn attempts Mary’s found themselves in firm control again, before a massive volley by the influential Clancy sealed a 25-15 opening set win.

Mary’s had firmly set out their stall by this stage, but they further increased their tempo when the action re-started, and they subsequently opened up an extraordinary 11-0 advantage with five successful serves by the outstanding Sarah Benn (current Deputy Head Girl at St Mary’s) and two eye-catching volleys from Karen Benn, both of which were set-up enticingly by Power.

Holy Family did finally open their second set account when wing Sarah Benn’s volley was fired out of bounds, but Mary’s remained largely unperturbed by this slight set-back, as volleys by Orla Lynch (two) and Cassidy increased their lead to 13 points.

The Newbridge girls did gather a bit of momentum with five points on the trot, including three magnificent serves by captain Clodagh Cummins, and though Mary’s continued to rattle off points consistently, a series of Naas misses left eight points between the teams (20-12) at an advanced stage in the set.

Holy Family had too much ground to make up in order to tie the game, however, and after three further points secured by the increasingly dangerous Sarah Benn, along with one from fifth year student Meabh O’Brien, Mary’s emerged with an emphatic 25-13 set supremacy.

This placed Mary’s into pole position ahead of the third set, but despite racing into an early two-point lead following a couple of unforced errors by Holy Family, they endured their toughest set of action by some distance. Mary’s did initially hold on to their slender advantage, but a miscued return volley by Karen Benn helped Newbridge to move into an 8-7 ascendancy.

Four consecutive scores did re-affirm Naas’ superiority, but Holy Family looked set to force their way back into the reckoning when valuable contributions by the excellent duo of Cummins and Wnek gave Holy Family an encouraging 14-12 lead.

Mary’s opted for a much-needed time-out at this point, though, and five majestic serves from as many attempts by Karen Benn on the re-start edged Naas even closer to the Promised Land. Indeed, they were only slightly side-tracked by the concession of back-to-back points, and another sequence of five unanswered scores (including fine volleys by Clancy and Power) left them needing just three points to secure the silverware on offer.

Holy Family did show great character to force Naas into the concession of four points without reply, but a highly motivated Mary’s made sure of their magnificent win when scores by Sarah Benn and Lynch – a volley and serve respectively – were followed by an over-extended return volley from Newbridge’s Wnek.