The challenges of playing girls soccer in Kildare 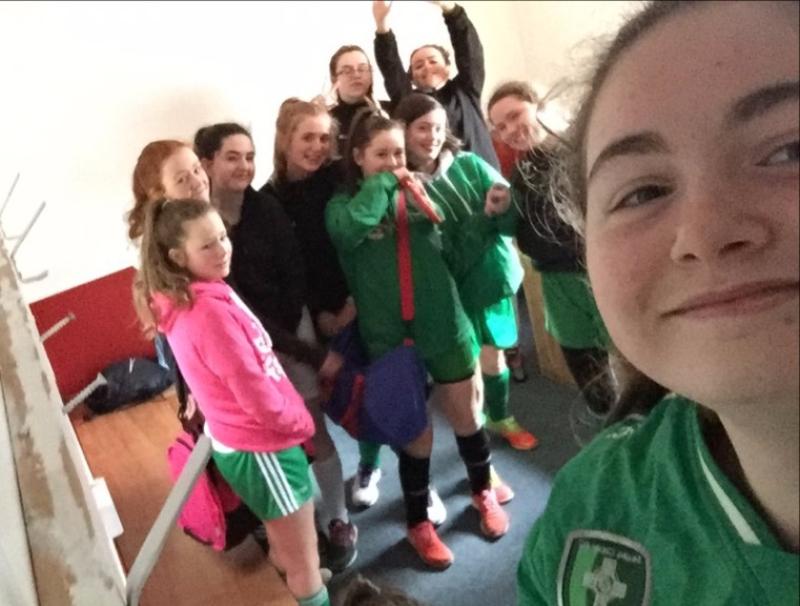 I have always adored soccer. I played it with my Dad every day, constantly kicking the ball against a wall or using jumpers for goalposts.

Whenever I wasn't kicking a ball I was watching either an Ireland or West Ham match.

My older sisters weren't as taken by the sport as I was, my Dad is just glad that one of us inherited the love for the 'beautiful game'.

My entire life I have wanted to pull on the green jersey and be an international player, but there are constant obstacles for girls like me who want to play professionally.

The main obstacle is that there isn't as much funding or structure provided in the girls game in Ireland in comparison to the boys. Due to this I actually hadn't played a competitive match until I was 12 years old. My Dad and I were constantly looking for clubs that had an underage girls’ team but to my surprise there were none then.

Imagine that in a town of roughly 20,000 they couldn't pull together a squad of 15 girls to play in a league! Even today, a quick check of the local clubs' websites, there are still only few teams around Naas for young girls to join. Caragh Celtic have an under-14 team, Newbridge Town have an under-13 team and Naas AFC have an under-10 team. Altogether those towns and village have a population of roughly 45,000, there are only three teams advertised on the websites.

In 2013 I finally found a team, Sallins Celtic. They had set up their under-13 girls team a year before and had come second in the cup, an incredible achievement for a team that had just started.

I made my debut for the green and white of Sallins in September 2013 against Athy, it was a game that we won by such a large margin that to this day I still don't know the score! By the end of the season I moved from centre-back into my preferred position of a winger/attacking midfielder. In my first ever final for Sallins we were playing our rivals Bridge United, who eventually defeated us 3-1.

I have been playing with Sallins Celtic ever since. In my second season we changed from under-13 to under-14 to accommodate the changes made to the KDUL girls’ league. In my second and most recent final we were once again playing Bridge United and like the year before we lost.  After all the losses in finals I'm starting to think we have a curse on us, much like the Mayo footballers.

Although we never got to take the cup back to Sallins we've had other successes, in my three seasons with the club we have lost two finals and came second in the league. I have also had personal success with the club, I finished as top scorer and captained the side last season and I recently won my second 'Players Player of The Year' award in a row.

Last season happened to be our least successful, as we failed to get into the cup final and played unexceptionally in the league. You could say our bad season was due to how we were blighted by injuries and that one of our best players was unavailable for most matches, as she usually had games for Kildare under-16s in Gaelic football the same days that we played. However, even with all these obstacles we still managed to beat our biggest rivals Bridge for the first time in three years with a 2-1 home victory.

Sadly, it looks like my time with the Sallins Celtic under-16 team is coming to an end, as we don't have enough players for our team this year. This is due to the fact that most of our players from last year are no longer eligible to play under-16s again this season.

Also many girls in Sallins or Naas are either too busy with school and other activities or simply don't want to play. This means I will no longer be playing with two of my good friends who I met through the team, as they are no longer in the age category of the league.

At the moment it appears as if we will be joining with Leixlip United AFC to form an under-16 team to enter into the Metropolitan Girls League in Dublin rather than the KDUL. It looks as though this could have advantages for both teams, as it gives Leixlip more players to use in a tougher Dublin league and it allows us to continue to play the game that we love.

All the Sallins girls love the idea, as Leixlip go on a trip to Holland every June to play in a tournament! Thankfully, the talented under-14 side is remaining with Sallins Celtic, as they have a sufficient amount of players to consistently field a team.

Although I will be no longer playing underage soccer with Sallins Celtic, I may be playing senior soccer with them as my former coach, who plays for the senior women's team, wants myself and some other girls my age to join her team also. It's a great opportunity for us to be training and learning from the older and more experienced players. Although I'm looking forward to the many new opportunities I have, I'm glad that I wont have to say goodbye to the club I love just yet.

In the next few years I hope to see more girls taking to the pitch to play the beautiful game. Not only is it good for you physically, you can use it as a way to escape from the pressure of school and exams, even if it’s just for an hour each week.