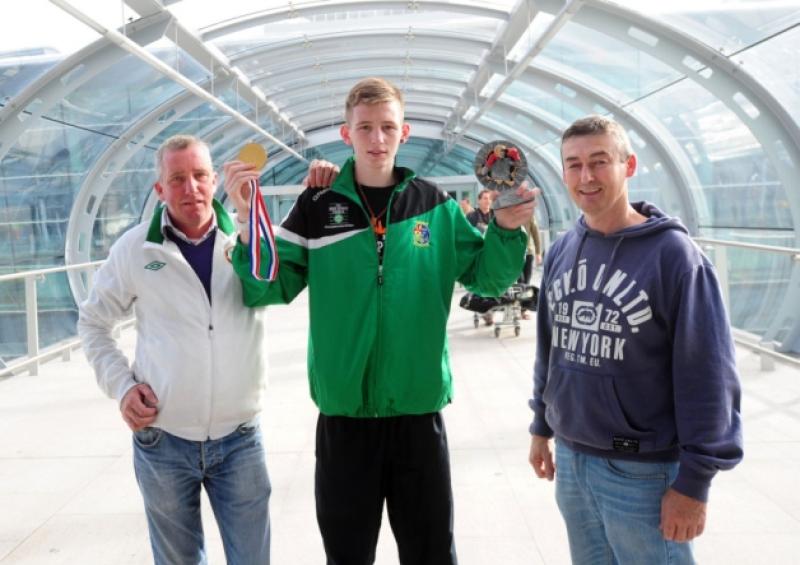 He has been a hero of residents of Sarto Road in Naas for a number of years but now he is a hero, not only of Kildare folk but of the entire country.

He has been a hero of residents of Sarto Road in Naas for a number of years but now he is a hero, not only of Kildare folk but of the entire country.

Gary Cully, the not yet 18-year-old, hit the boxing headlines on Saturday last when winning the gold medal in the 52kg class at the European Youth Boxing Championships in Holland.

On his arrival home on Sunday, family, friends and lots of neighbours, including Mayor of Naas Emer  McDaid, were there to greet Gary who is a pupil at Piper’s Hill school in Naas and will be sitting his Leaving Cert in 2014.

Last week wasn’t the first time this talented southpaw has worn the green, in fact prior to last week he has represented his country on all of ten occasions.

A member of St. David’s Boxing Club in Naas, under the tutelage of head coach Paul Archbold, Gary has shown tremendous promise since he first took to the ring ten years ago, winning title after title s as he progressed through the weight divisions from 42kg up to 54 kg.

Speaking to the Leinster Leader at his home on Sunday Gary said he was in the ring on five occasions on his way to, not only collecting gold but also being awarded the Boxer of the Tournament, a magnificent achievement considering there were some 248 boxers in ten weight divisions in action throughout the tournament.

Gary defeated boxers from Latvia, Belarus, Russia and on Saturday won an unanimous decision over Kirill Kuznetsov in the semi final, going on to defeat Mammadov’s Masud Yusifzada to claim gold in the final, again on a unanimous decision.

Was he confident of success heading to Holland last week?

“I knew I had put in the time, knew I had done the training and was one of the favourites but thankfully it all came good” said the young man who trains six to seven times a week.

“I do most of my training at St. David’s but coming up to the Europeans I trained with the national senior squad in Dublin along with Katie  Taylor and John Joe Nevin where I had some great sparring sessions.”

Next up for this talented young man is the World Youths in April and then hopefully the Youth Olympics.

First of all a few well earned weeks off and after that ... the sky’s the limit.