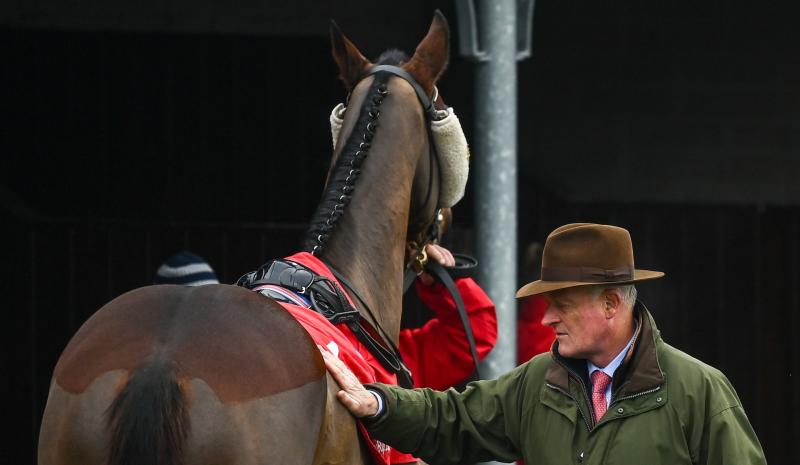 Willie Mullins-trained pair of Dysart Dynamo and Sir Gerhard and Nicky Henderson’s duo Constitution Hill and Jonbonare among the big names in contention for the Sky Bet Supreme Novices’ Hurdle.

An initial 61 entries, down from 96 last season, have been made for the traditional Cheltenham Festival curtain-raiser, with this year’s renewal having the potential to be one of the most eagerly anticipated in several years.

The marginal favourite at this stage is Constitution Hill following his exceptional performance in the Tolworth Hurdle at Sandown, while his stablemate Jonbon maintained his unbeaten record with a more workmanlike display at Haydock on Saturday.

Dysart Dynamo, meanwhile, has risen from relative obscurity to becoming a major player after his jaw-dropping recent victory in Moscow Flyer Novice Hurdle at Punchestown.

Sir Gerhard, winner of last season’s Champion Bumper, is the biggest priced of the quartet at 7-1, despite his thoroughly impressive hurdling debut at Leopardstown over the Christmas period. All four horses, like several others, are also among the 95 entries for the longer Ballymore Novices’ Hurdle.

Gordon Elliott’s Mighty Potter, who has already won a Grade One novice event, is also doubly engaged, whereas the Paul Nicholls-trained Stage Star is just in the Ballymore.

Ante-past punters also face the headache of trying to work out which horses will run in the Ballymore or tackle the three-mile Albert Bartlett Novices’ Hurdle, for which 52 names are in the mix,

Elliott’s pair of Ginto and Hollow Games, who were first and third in a Grade One at Naas recently, are among those given the twin entry in the two longer novice events.

A total of 59 entries are in the hat for the JCB Triumph Hurdle.