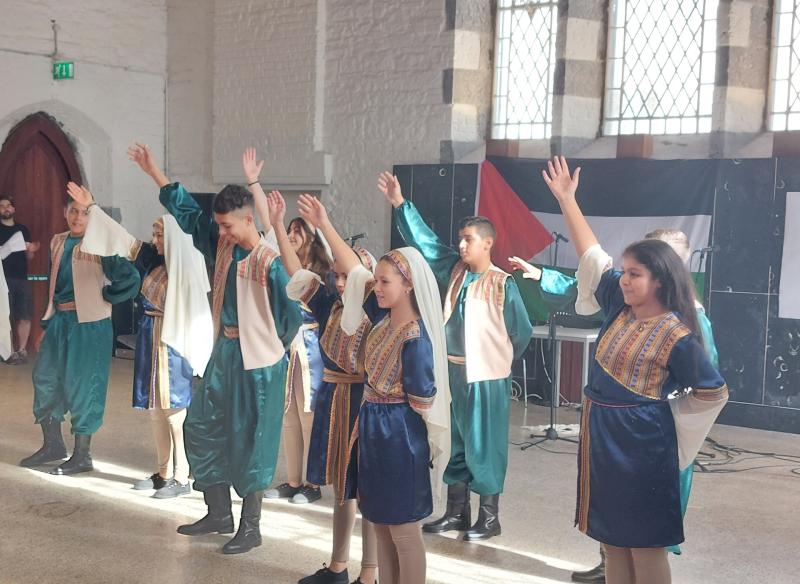 The dancers received a round of applause after each performance.

Palestinian dancers and musicians from the Lajee Centre exhibited their talents at Newbridge Town Hall this morning.

The event featured artists on the Lajee Cultural Tour 2022, and was facilitated by Kildare County Council.

The town hall was adorned with various Palestinian flags, while photographs and leaflets detailing Israeli occupation were placed on different walls and tables.

T-shirts and hoodies were also being sold in support of Palestine.

Among the attendees were a mix of Palestinian nationals, many of whom wore traditional Palestinian keffiyeh scarves, and local Newbridge residents.

Palestinian musicians performing at the event. In the background is a picture of the late Salah Ajarma, founder of the Lajee Center

Speaking ahead of the event, Cllr Chris Pender told the Leader that there were similarities between Ireland’s history and Palestine’s history, and believes that this is a key reason why so many Irish people are sympathetic to the Palestinians.

He said: "People may often times see us as a small little backwards country, but we have actually been a multicultural nation for such a long time, and we would recognise injustice, as we have seen injustice through our own history."

Kildare Cathaoirleach and Fine Gael councillor Fintan Brett took to the stage to talk about the 'ongoing turmoil' in Palestine, and expressed his wishes for peace in the region.

The event was hosted by singer May Kay, and featured Palestinian dancers who performed the traditional dance known as Dabka, which is an integral part of Palestinian culture.

Traditional Palestinian music was also played, in addition to Irish music and a performance by dancers Ashling Keegan and Elaine Birchall of the Geraldine Clifford Dance School. 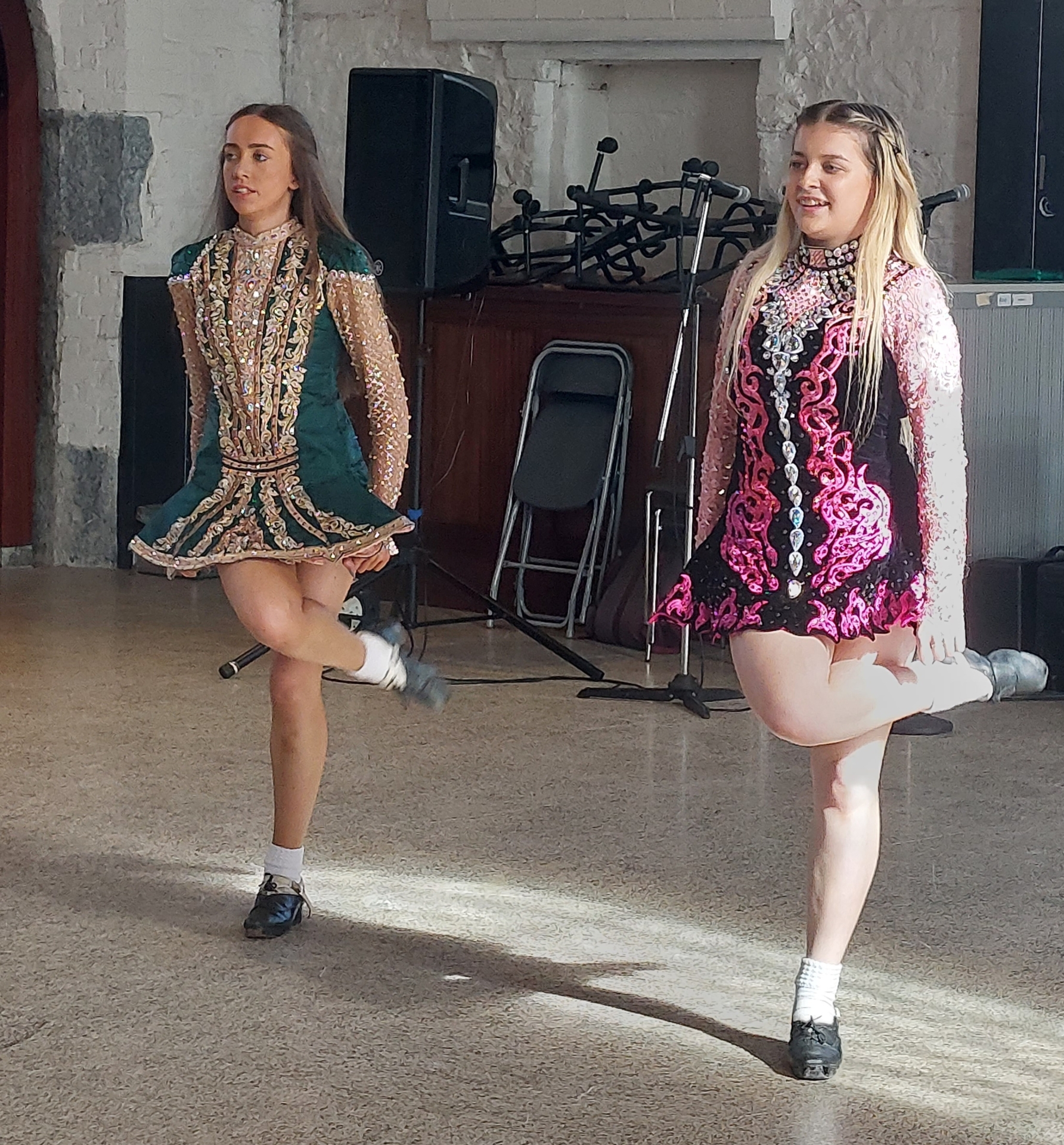 At one point, a poem by two Palestinian nationals was read out: once in English, once in Palestinian Arabic, and finally, once as Gaeilge.

Sinn Féin Cllr Noel Connolly also spoke at the event, where he noted the similarities between the history of Ireland and Palestine.

Two Palestinian nationals, Mohammad Alazraq and Ayah Darwish, also spoke at the event, where they detailed their time at the Aida Refugee Camp, which is located near Bethlehem.

Ayah shared details of what life was like living under Israeli occupation, while Mohammad also paid tribute to the late Salah Ajarma, the founder and former director of the Lajee Center, who passed away in 2021.

Light refreshments were served after the event, while traditional Irish music was played afterwards by a live band. 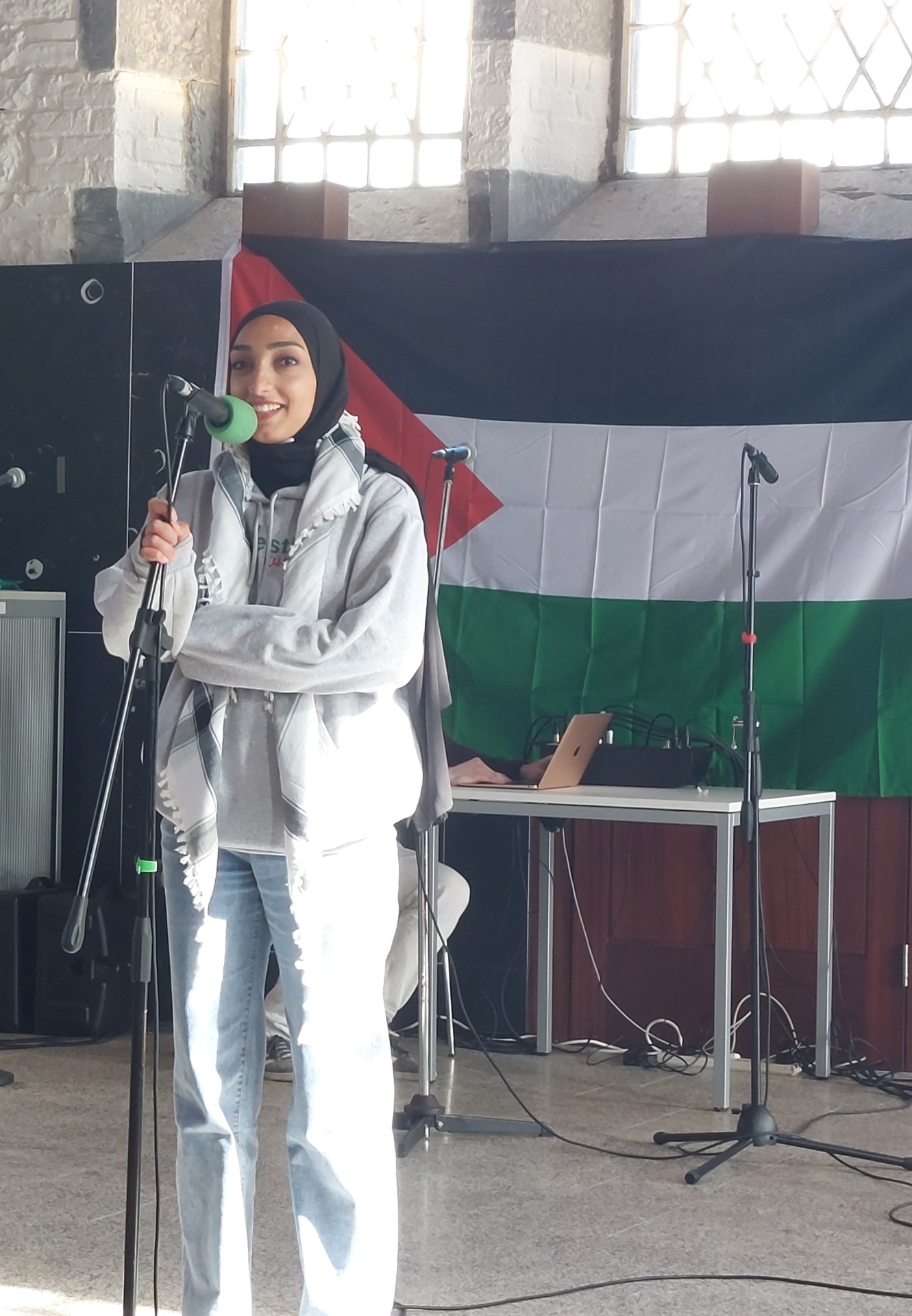 Ayah Darwish speaking at the event

The Lajee Center was founded in April of 2000 by Salah Ajarma.

It is a community-based center that advocates Palestinian traditions and human rights.

According to its site, the main aim of the center is to provide refugee youth and women with cultural, educational, social and developmental opportunities.

Its programs are designed in response to the particular needs of the community and the skills and abilities of its members.

Further information about the Lajee Center and the work it does can be found at https://lajee.org/.