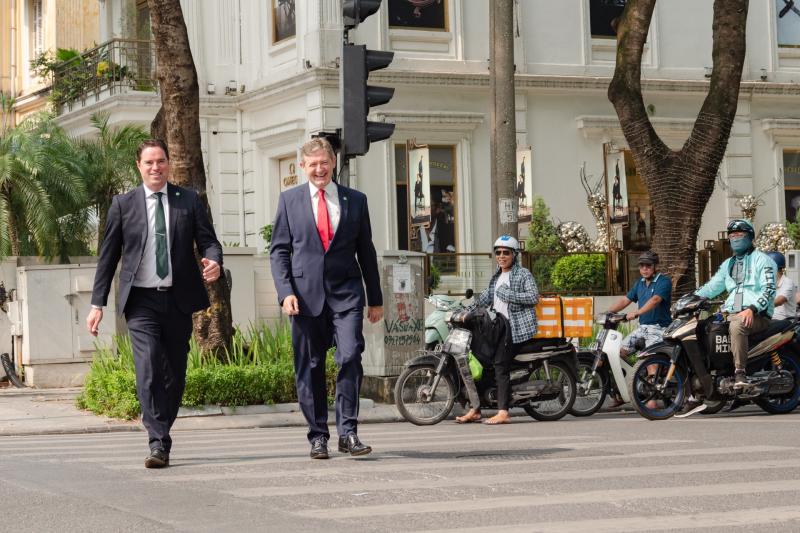 An Irish delegation is currently on an agri-trade mission to Vietnam to explore significant export opportunities for the Irish food and drinks industry.

Minister for State with special responsibility for Research and Development, Farm Safety and New Market Development, Martin Heydon TD has begun the Vietnamese leg of a Government agri-trade mission to Japan and South-East Asia, following on from engagements led by Charlie McConalogue TD, Minister for Agriculture, Food and the Marine, in Japan and Singapore.

Minister Heydon, who is based in Kildare, now leads the ongoing trade mission to Hanoi for a series of bilateral engagements and industry seminars, in cooperation with the Embassy of Ireland in Vietnam, and with participation from Department of Agriculture, Food and the Marine officials, Bord Bia, Enterprise Ireland and representatives from the Irish food and drink industry.

On his delegations initial engagements on the trade mission in Hanoi, the Minister has briefed an EU Dairy Technical Seminar in Hanoi and taken part in a pigmeat and seafood customer trade reception.

Speaking of his visit to Vietnam, Minister Heydon said: “Vietnam’s agri-food sector has shown remarkable growth and transformation in recent years, creating significant opportunities for Irish exporters of food and drink as well as agri-tech to build long-term partnerships in this priority market. I look forward to engaging with Government counterparts on progressing market access for beef, and to seeing for myself the positive contribution which Irish aid is making to transform rural livelihoods.

"There is huge potential to not only grow our agri-food exports to Vietnam but also to deepen our cooperation and share Ireland's expertise on the development of a sustainable agri-food sector".

Bord Bia’s new export strategy for Vietnam, launched during the trade mission, is falling in line with the European Union (EU) and Vietnamese Free Trade Agreement (FTA). The FTA will see tariffs on European dairy fully removed on January 1st, 2023, after which Europe’s market share would be expected to rise.

As part of the trade mission, Bord Bia is also launching its new three-year EU dairy promotional campaign that will cover the Vietnamese and wider South East Asian market. The campaign, EU Dairy, the Sustainable Choice for Asia, will be launched to Vietnamese buyers and trade media in Hanoi.

Bord Bia Interim CEO, Michael Murphy, said: “There is enormous potential for Irish food and drink in Vietnam, and Bord Bia’s new three year strategy for the region will focus on raising the profile of Irish food and drink through awareness of it as a premium product sourced from family run farms, and fully traceable from farm to fork.

“Ireland and Vietnam share an understanding that security of supply is key to allowing both countries to plan ahead for growth and success. Our ambition is to build further on the strong partnerships Ireland has with our customers in Vietnam and trade missions such as this are a valuable means of raising the profile of Ireland as a food producing nation and unlocking commercial opportunities for Irish food and drink companies,” he said.

Minister Heydon continues the trade mission to Vietnam through Friday September 9, with a series of governmental, commercial and development co-operation engagements.