A group opposed to the development of proposed modular homes for displaced Ukrainians on a green area in Newbridge has released a letter detailing its list of grievances to the government.

Written by Noreen O' Shea and Tom McDonnell, the LHD confirmed that it was formed following the public meeting on Thursday, August 25.

The group will also be holding a protest in Newbridge this Saturday afternoon, with more planned to follow.

In the letter, which was addressed to Minister O' Gorman, the LHD said: "Residents are incredibly concerned. We were all extremely shocked to learn that your department, Kildare County Council and the Office of Public Works (OPW) have planned to erect 30 modular homes on our green area without so much as notifying the residents."

The LHD said that there was anger over the 'complete non-engagement of OPW and the Dept with our local community groups.' 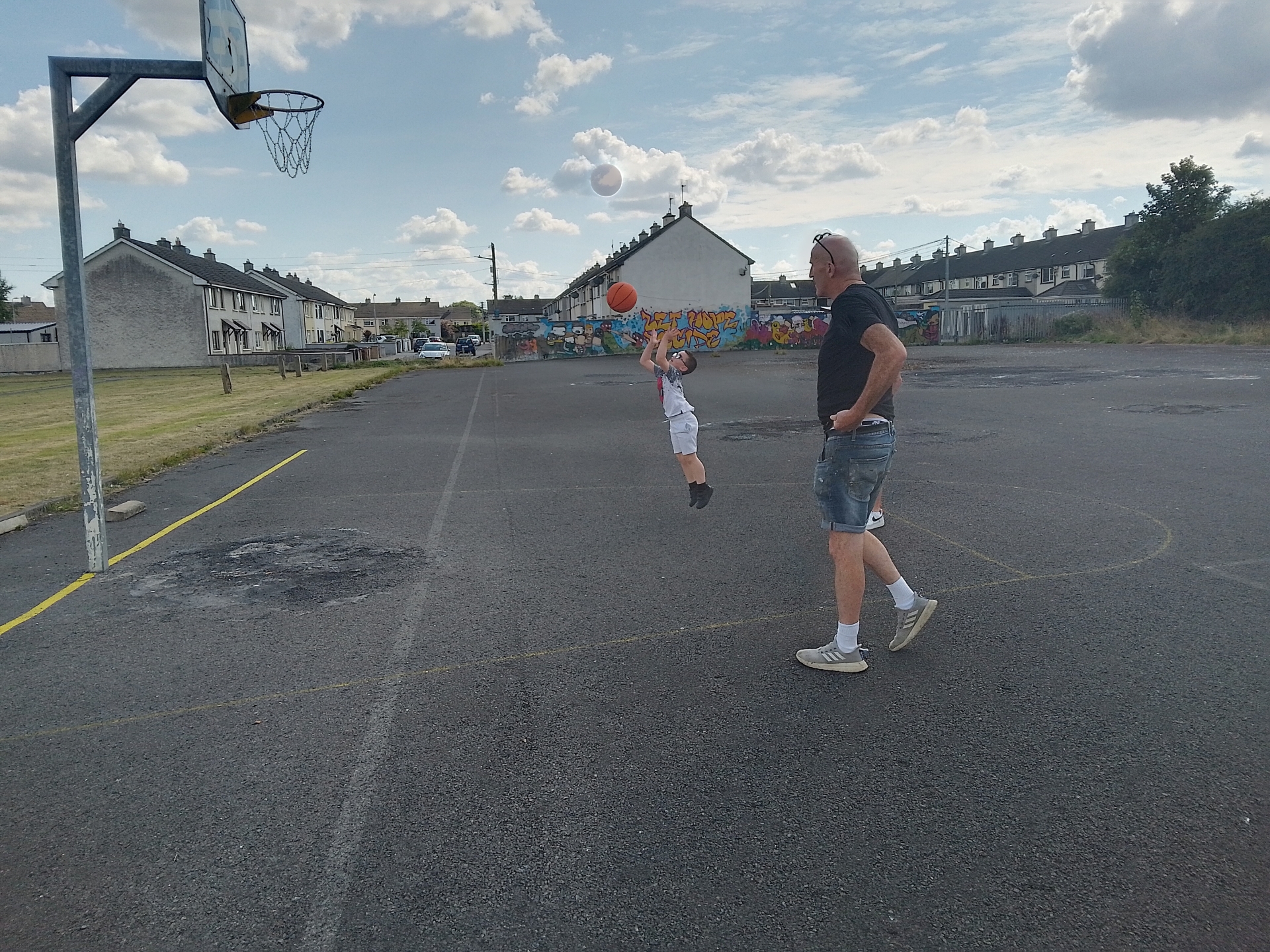 Two residents enjoying the green space at the proposed site for the modular home. Pic Supplied by the LHD.

"Under the Aarhus convention, members of the public are entitled to take part in making decisions where there may be an environmental impact," they added: "This includes planning."

"Residents of LHD were not afforded that opportunity."

The Aarhus convention refers to an international agreement that gives people the right to access information about the environment.

The LHD specify that while they sympathise with the plight of Ukrainian nationals who have been displaced by the conflict, they 'vehemently object' to the green area between Dara Park and Lakeside Park being used as the site for proposed modular homes.

The following objections are listed in the letter:

"Residents were not notified or consulted with regarding the plans to erect these modular homes. We feel that the government was very underhanded with this and purposely kept it secret."

"Our green area is a lovely, picturesque area, which residents have worked hard to maintain over the years. It is enjoyed by joggers, young children playing, dog walkers, wide variety of wildlife etc.

"There is already a lack of amenities in the area. It would be such a shame to build on this. The field has been there since the early 1970’s. The residents committee have been working hard campaigning to get the status of the park recognised as a national park."

"The three estates have a huge existing issue with our sewerage system. There are problems for many households in different parts of the three estates. The infrastructure would be put under more pressure by an extra 30 homes.

"This is exacerbating an existing problem. Kildare County Council are already aware of these issues as residents have reported them numerous times."

"The proposed site is already prone to flooding each winter. This is clearly not an ideal site for modular homes.

"The planned site is used as a shortcut for residents on foot to access the neighbouring estates, shops and supermarkets. Also, for commuters who walk to the train station for work daily. By removing this access, you are severely inconveniencing residents.

"In particular, elderly and disabled residents who don’t drive and use the route to access the local shops. We were contacted by one such elderly resident who told us that should this goes ahead, he will have to take an alternative route to Dunnes stores which will add a considerable amount of time to his journey."

"As your Dept and Kildare CoCo have chosen to go ahead with these modular homes without any planning permission, we fear that this could set the precedent for others.

"Who is to say that no one can just come onto our estates green and put their own
residence there? Where is the line to be drawn?"

As you know, many residents across LHD privately own their homes. We are concerned about possible impact for house values, particularly the houses which benefit from the view of the green area.

"Residents have also highlighted that local GP services and schools are already heavily oversubscribed. It is very difficult for children to access school places locally and there is a lack of a school bus services to neighbouring towns such as Kildare Town and Naas.

"GP retirees are not being replaced and local GP surgeries are not taking on any new patients."

"We are concerned about the impact of these extra homes. Where will residents park and where will road access be?"

"Concerns were also raised about the possibility of commuters parking here to access the train station."

Concluding their points, the LHD urged Minister O' Gorman's Dept to reconsider the location of this site: "The site is not equipped to handle another 30 homes."

The group also invited Minister O' Gorman to meet with them to discuss the possibility of mediating the situation.

The full contents of the letter can be viewed below. 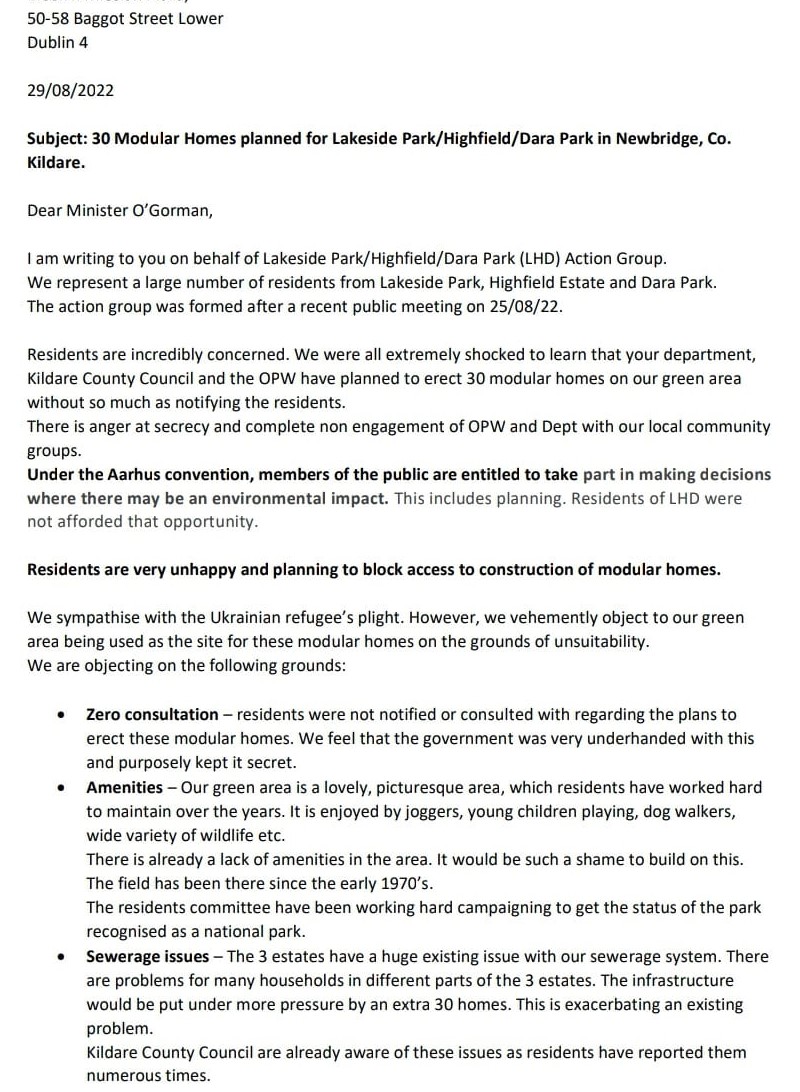 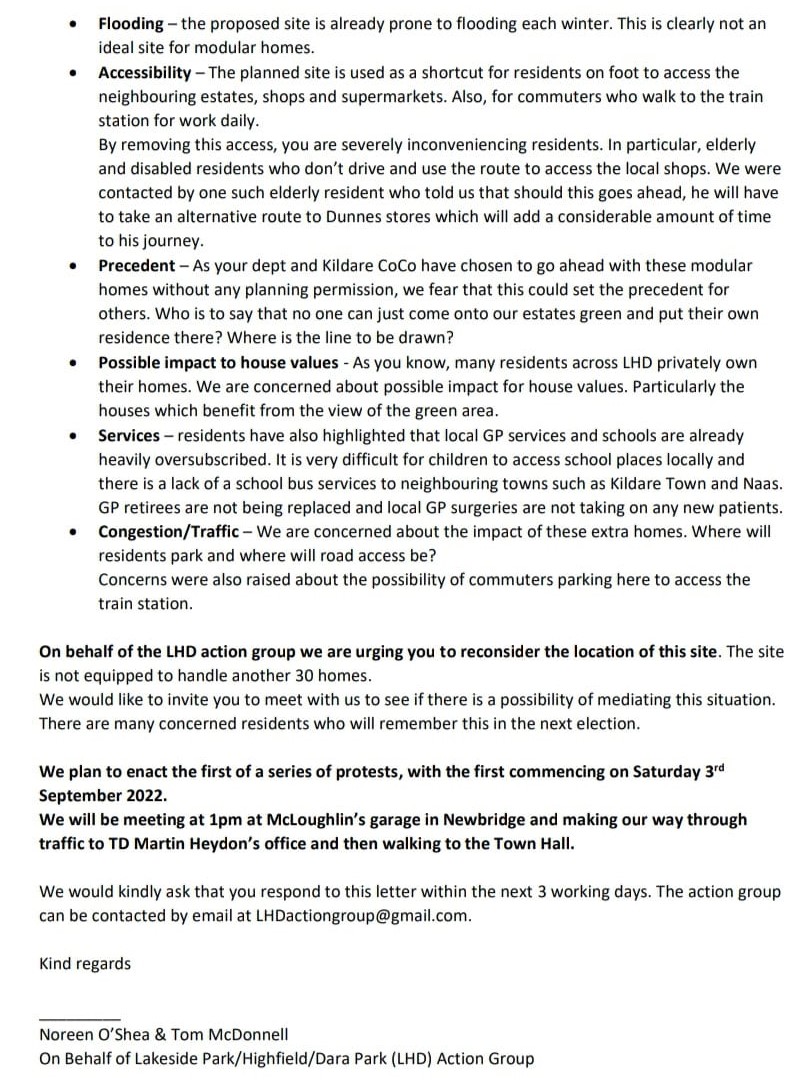