Kildare books: From Clane to Chicago, a biography of a patrolman and a piper 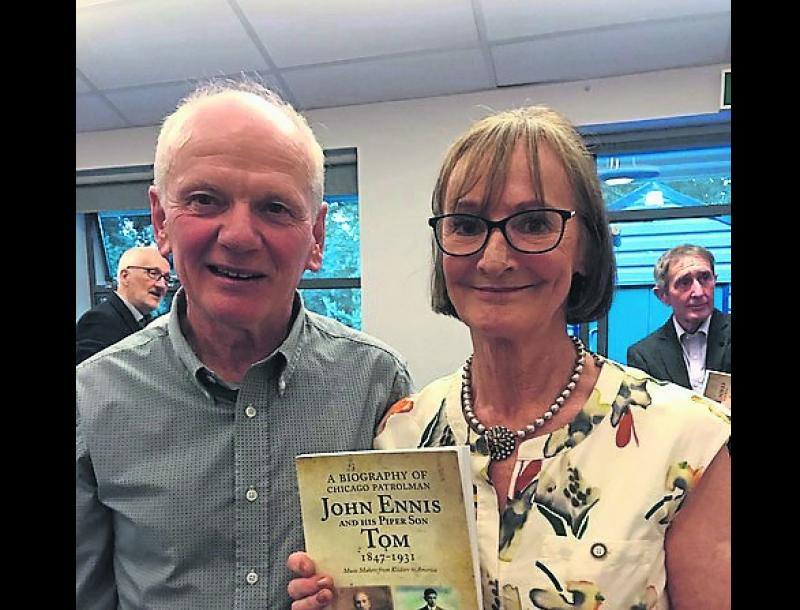 When Chicago in the early part of the 20th century is mentioned many of us might think of the prohibition era and the rise of racketeering and crime.

Especially when there is a policeman involved.

Those not so much concerned with law and order and more with a snapshot of a history of Irish traditional music should enjoy a new book by Seamus Kelly and Aileen Saunders.

The duo have just produced a book about John Ennis and his piper son, Tom, which is set around the Irish experience in the United States in the late 19th, early 20th century.

The cities of Chicago and New York feature largely in what is effectively a two part work about the Ennis family, who are distant relations of Aileen Saunders.

What is remarkable about this book is the amount of research which went into tracking the lives of John and Tom. The authors' research ranged from the pages of the Gaelic American newspaper set up by Kildare Fenian, John Devoy, to the Chicago Tribute and the Leinster Leader.

What made finding the story particularly difficult was that neither John or Tom left personal papers, archives or correspondence.

This meant that the authors were confined to the writing of others, official records and, notably, advertisements in the local Chicago and New York newspaper to try and figure out the life of the duo, and other family members.

The main character in the story, John Ennis, was born in 1847.

His grandfather, Tom, had been born in 1770 in Blackhall, Clane.

Tom’s son, John (John’s father) was born in 1792 in Killybegs, Prosperous and John arrived in 1847, two years after the Great Famine.

John Ennis left Kildare for the US at the age of 21, in 1868, and apart from his interest in traditional Irish music, was a prolific writer in the press, holding strong republican views.

He joined the Chicago police force in 1893 but had worked in other businesses, including hotel and saloons.

The authors don’t shy away from the possibility that he was involved in the odd “dodgy” deal.

John remained a basic patrolman all his life despite having a number of talents, such as work organiser and writer.

He patrolled the opera house area of Chicago for 17 years and was moved in 1911, when he was 64, eight years before his retirement.

Among his songs, he wrote The Shady Road to Clane, which appeared in the Gaelic American in 1905 and on which he took out US copyright. It was recorded by, among others, Mick Wynne, in 1979.

John’s son Tom became a professional uilleann piper and between playing gigs, owned record stores and ran dance halls. There were around 28 Irish dance halls alone in New York but the authors believe Tom may have bit off more than he could chew.

He had a gramophone shop in New York at the corner of 59th street and 9th Avenue for a while.

He also ran in the local elections for the Democrats in 1913 but was defeated.

Newspaper reports suggest one of the reasons was that he was associated with support from another politician, who had quit after being repeatedly convicted of saloon violations.

Both Tom, and a brother of his, fought for the US army on the Western Front in France and all survived.

The authors' note that business was good for the Ennis duo during the War of Independence period but less so when the Civil War began here just after that.

As it turned out Tom died quite young from a heart attack at the age of 41, around three years after he married Coral French Ennis, who was six years older than him.

Tom’s sister, Mary or Mae, a Chicago school teacher, buried three close family members around that time. She died relatively young herself, in 1940, at the age of 50. There is a song named after Tom, called Young Tom Ennis. It was recorded by a number of artists including Noel Hill, Paddy Glackin and Liam O’Flynn.

A Biography of Chicago Patrolman — John Ennis — and his Piper Son, Tom, 1847-1931: Music Makers from Kildare to America is written by Seamus Kelly and Aileen Saunders. It is printed by Naas Printing Limited.