Pizza chain is looking to expand into Kildare 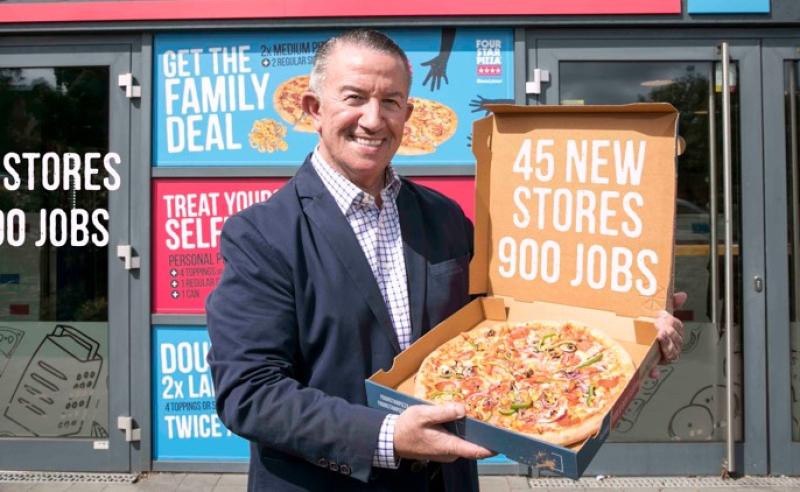 County Kildare has been identified as a possible location for several new Four Star Pizza stores to be opened by the company over the next three years.

Established in 1986, Four Star Pizza currently operates 42 outlets in the Republic of Ireland and 14 in Northern Ireland but plans to bring its total number of stores to more than 100 by 2025 – targeting 27 new stores in the Republic and a further 18 in the North.

An average of 20 jobs per store will see the company create a total of 900+ new jobs during this period.

Now the food giant is on the hunt for ambitious local entrepreneurs who would like to earn a crust and grab a slice of success with one of the country’s largest pizza companies.

According to CEO Colin Hughes, interested parties do not need any previous pizza experience as Four Star Pizza will provide all the necessary training in food preparation, accounts, customer service, delivery and marketing.

“Our ultimate goal is for virtually everyone in Ireland, north and south, to have access to a local Four Star Pizza outlet, and we have identified Kildare as a strong potential location for more stores,” said Hughes.

“We currently have a number of potential locations under review, including Leixlip, Maynooth, Celbridge, Newbridge and the town of Kildare itself - but we’re also open to suggestions from potential franchisees who wish to join our expanding presence in Ireland.

“With this in mind, we are encouraging any local entrepreneurs with a good head for business to consider joining our growing franchisee network in Ireland and becoming part of a progressive company with a very strong brand.

“We’re offering candidates an opportunity, in just a few months, to run their own business, built around a highly successful model and with all the support you need from a team of business experts to help you to recruit, manage, grow and thrive in your area."

Anyone interested in finding out more about becoming a Four Star Pizza franchisee can do so on https://fourstarpizza.ie/ franchisee-opportunity/ or by sending an introductory email to info@fourstarpizza.ie, or calling the company on 01 7037300.