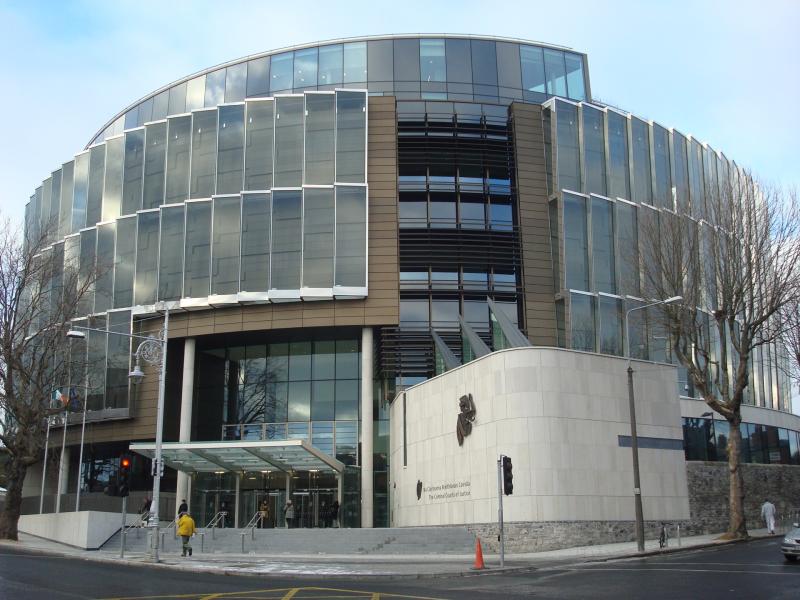 David Morrissey had pleaded not guilty to driving without due care and attention thereby causing the death of 19-year-old Harry Boland. Pic: Dublin Circuit Criminal Court

A truck driver has been given a nine-month suspended sentence for careless driving causing the death of a cyclist in Dublin four years ago.

David Morrissey (29) of Glendale Meadow, Leixlip, Co Kildare, had pleaded not guilty to driving without due care and attention thereby causing the death of 19-year-old Harry Boland at the junction of Greenfield Park and the Stillorgan Road on April 18, 2018.

He was convicted by a Dublin Circuit Criminal Court jury last May following a five-day trial.

The trial heard that Mr Boland was in the north-bound cycle lane at the junction of Greenfield Park and the N11 Stillorgan Road opposite RTÉ, with the traffic lights at red.

Morrissey was driving a large DAF rigid truck, used to transport quarry material to and from building sites and was stopped in the left-hand lane.

Beside him was Mr Boland and another cyclist, Jason McMahon, who was behind Mr Boland.

When the lights changed to green, Morrissey turned left and Mr Boland ended up under the truck, severely injured.

Despite the early arrival of off-duty first responders and medics, plus a HSE ambulance crew and emergency consultant from nearby St Vincent's Hospital, Mr Boland was pronounced dead at the hospital a short time later.

The prosecution case was that Mr Boland was visible from the point of view of the lorry cab and that Morrissey should have seen him, with the aid of several wide-angle mirrors mounted on the truck, including mirrors covering the road immediately to the front and to the left-hand side of the vehicle.

Morrissey said that he had looked but had not seen Mr Boland.

A Garda forensic crash investigator said a blind spot, from the point of view of the truck driver, was very small and much smaller than Mr Boland and his bicycle.

Sentencing Morrissey today, Judge Elma Sheahan said she was satisfied that inattention by Morrissey, in a manner which fell below that of a reasonably competent driver, meant that he moved off when it was not safe to do so.

"Had he been paying due care and attention one would have expected him to have seen Harry Boland," the judge said.

She said that Morrisey’s driving had catastrophic consequences and said the Boland family had borne this 'huge loss' with 'dignity and fortitude' as evident during the trial.

Judge Sheahan acknowledged that various witnesses gave different accounts as to what they observed that day and that Morrissey said he had checked his mirrors before moving the truck and was no one was visible to him.

The judge acknowledged that there were no additional aggravating factors in the case as there was no evidence that Morrissey had been under the influence of an intoxicant, he was not speeding, he was not on his mobile phone nor was there any defect in his vehicle.

Referring to various case law Judge Sheahan noted in a careless driving case, which has no additional aggravating factors, a custodial sentence is not necessarily warranted.

She also noted that a disqualification order, for a person such as Morrissey whose occupation requires him to have a full driving license, is a significant punishment as it affects his ability to earn a living and support his family.

Judge Sheahan took into account the fact that Morrissey has no previous convictions, that he showed genuine remorse and regret 'consistent with his actions at the scene of the accident' and his co-operation with the garda investigation.

She imposed a nine-month sentence which she suspended in full, having noted that the maximum penalty in the case is two years.

She also disqualified him from driving for five years but that disqualification order is not to come into effect until October to allow Morrissey to be of assistance to his partner who is due a baby in the coming months.

In a statement to gardai Morrissey described driving his eight wheel truck on round trips between quarries and construction sites, including a Cairn Homes development, UCD and a Roadstone site.

He told gardai he had driven along the N11 northbound and approached traffic lights at the junction of the Stillorgan Road and Greenfield Park.

He said he checked his mirrors and moved into left hand lane so he might turn into Greenfield Park.

The lights went red and he stopped. There was no vehicle on his left, he had his left indicator on and his handbrake on as well, the court heard.

When the lights changed to green, he turned left.

After completing the turn, there was a bump, he said in his statement.

He stopped and immediately jumped out and saw Mr Boland was severely injured.

He said he knew the situation was bad and could feel his own legs going.

While being tended at the scene by paramedics Mr Boland suffered a cardiac arrest.

He had a second heart attack at nearby St Vincent's Hospital, where he was pronounced dead at 4.08pm.

Morrissey was breath tested as a matter of routine and passed the test.

Both his truck and the bicycle were found to be without defects.