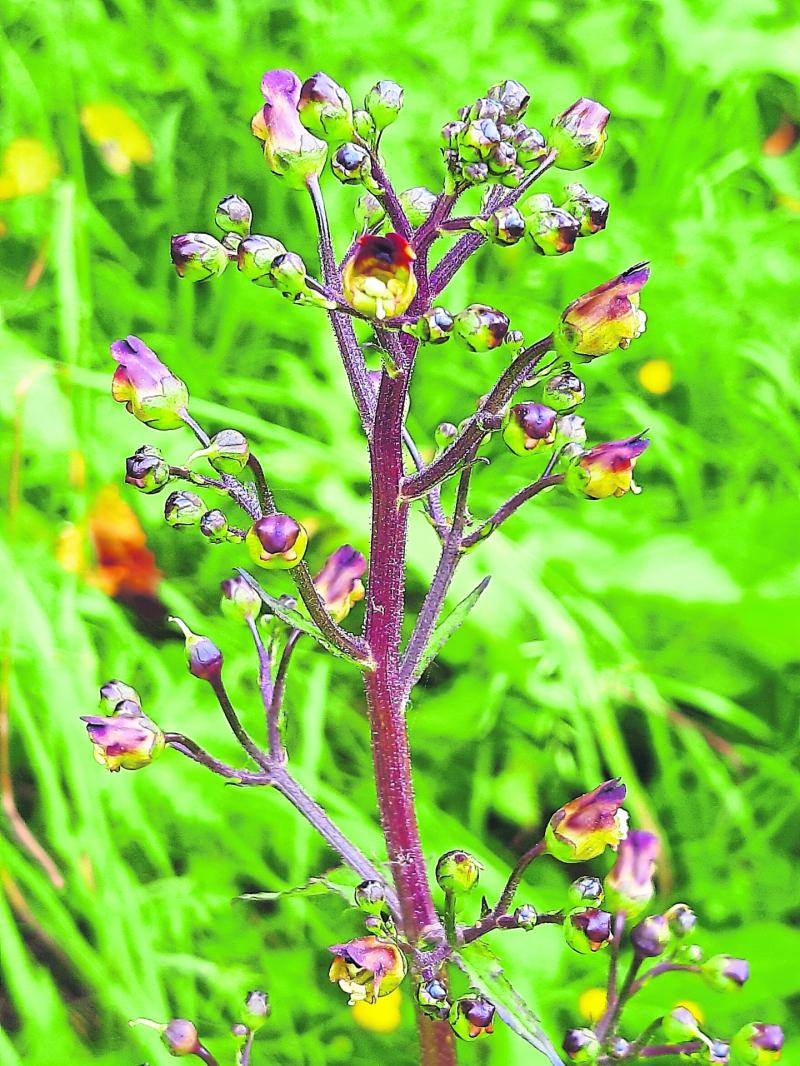 Common figwort (donnlus as Gaeilge) is one of Ireland’s wildflowers that I am not that familiar with. I have only recorded it growing in the wild on a few occasions — however, according to the Wildflowers of Ireland website this is a frequent wildflower in Ireland that can be found growing in damp ditches, hedgerows and roadside verges nationwide.

I recorded this particular common figwort along the banks of the River Barrow in Monasterevin recently; while another local spot I have found it growing was in the grounds of Castletown House.

There is a cousin to this plant, the water figwort. Both are native wildflowers in Ireland, and both can grow to a height of one metre.

However, the green leaves of common figwort are broad, oval, and toothed with a pointed tip. Those leaves found growing at the base of the plant have stalks while further up the stem the leaves become stalkless.

In terms of the water figwort, the leaves are smaller, oval toothed and have a blunted tip.

The flowers of common figwort grow in clusters and are relatively inconspicuous, blooming from June through to August each year.

Each flower is not your typical flower shape and is referred to as having two lips.

Common figwort is in the same family of wildflowers that includes foxgloves. The roots hidden beneath the surface are tuberous, meaning that the roots are made up of a number of small nodes.

Similar to many of Ireland’s native wildflowers, common figwort had a place in traditional medicine with extracts being used to treat skin conditions including eczema and psoriasis.

Considering this is said to be a frequent wildflower found nationwide, I wonder if you will come across common figwort in your community this week. I, at least, have not identified it on many occasions?

Don’t forget, if you come across a wildlife species that you would like help identifying I would be happy to help.