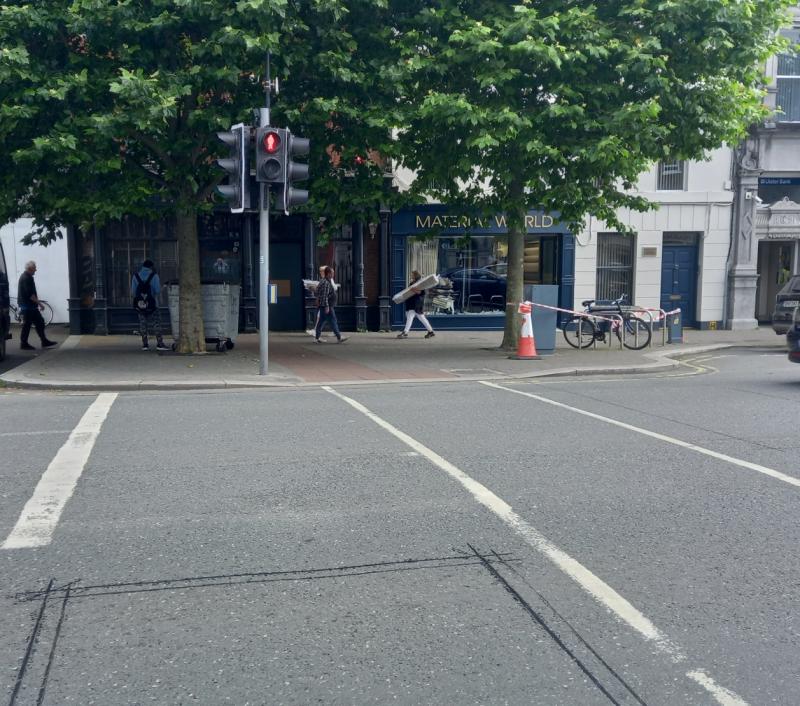 A dispute has arisen over how much time a pedestrian is given to cross a busy three lane main street in Naas.

According to a local councillor just three-four seconds is allowed to make the crossing at the Bank of Ireland premises on South Main Street.

He told a Naas Municipal District meeting on July 12 that this is not enough for a nine metre wide thoroughfare.

“Currently when the man flashes yellow, the yellow light for vehicles flashes too,” he said, adding that this causes a difficulty “Especially for children crossing and for elderly and disabled pedestrians.”

According to Kildare County Council though the “green man time” is set at seven seconds adn the “flashing amber man” is set at 10 seconds.

And this gives pedestrians up to 17 seconds to cross.

According to a report the allocated crossing ties accord with current regulations and “are considered sufficient at this location.”

The report also noted that the crossing time at that junction is greater than standard  crossing times as recommended under the relevant technical guidance documents.

KCC official Donal Hodgins said the issue is the 9 metre width but a printout could be provided verifying the council’s timings.

He said if more time is afforded pedestrians it would have the effect of slowing traffic but he suggested that this is a possible solution.

He also points out that in parts of Naas there are four lanes to be crossed.

Mr Hodgins said that KCC staff would be prepared to meet the councillor on-site.

Cllr Clear said the timings are not accurate and “the reality is you have three to four second to cross.

He added: “There is no way anyone has 17 seconds because traffic is moving through on the amber light.

Cllr Clear claimed that it’s only in Kildare that motorists can drive through amber lights and it appeared that a decision has been made to permit this.

He said the priority as far as KCC is concerned is to keep traffic moving - but he’d be prepared to attend an on-site meeting.

“I’ve been bringing this up for three ears and getting the same answer,” he said.