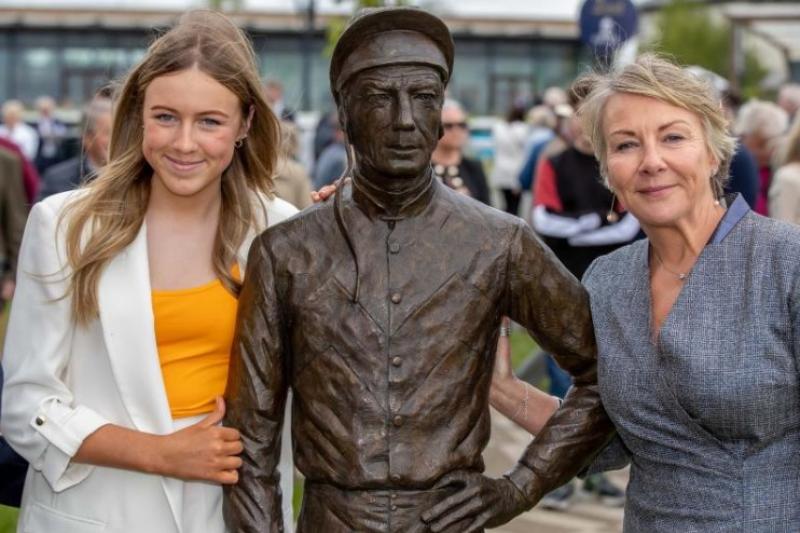 Racing fans are expected to gather at the statue of Lester Piggott at the Curragh Racecourse this weekend to homage to the horse racing legend who was a frequent winner at the home of flat racing.

The record-breaking jockey, who famously rode Shergar to a Derby victory in 1981, died in Switzerland in the early hours of May 29, aged 86 years old.

Just over a week earlier, Piggott’s Kildare-based daughter Tracy and her daughter Thea unveiled a statue to the iconic jockey at the entrance to the Aga Khan Grandstand during the Irish Guineas Festival.

Writing on her Instagram page, Kildare resident Tracy said of her dad’s passing: “It’s a sad, sad day. Daddy, I will miss you so much.”

She accompanied the post with a picture of her legendary father, who began his racing career when he was just 12 years old and was considered one of the greatest flat jockeys of all time.

Piggott had his most successful season in 1966 when he rode 191 winners.

He claimed his final win with Palacegate Jack at Liverpool in 1994, a few weeks short of his 59th birthday. He retired for a final time in 1995.

He was affectionately nicknamed ‘The Long Fellow’ as he was relatively tall for a jockey, standing over 5’7”.