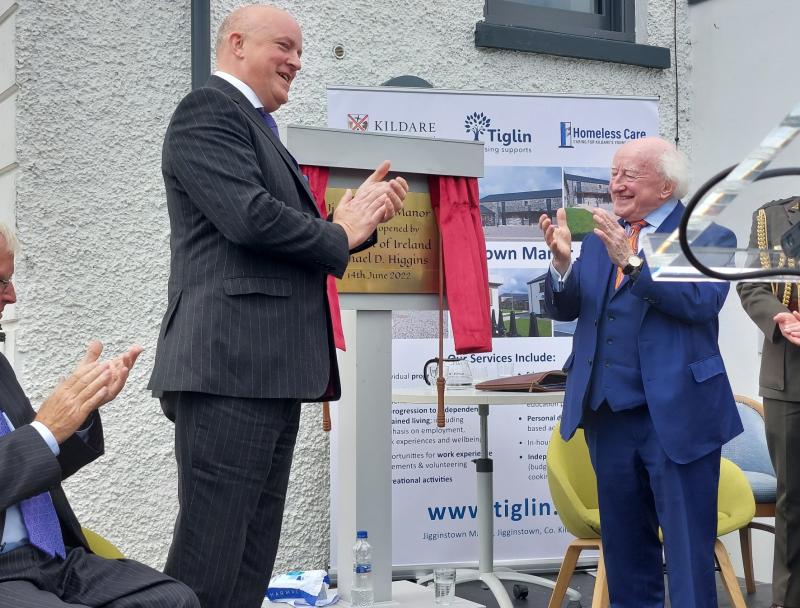 President Michael D Higgins at the Jigginstown Manor launch on Tuesday, June 14, where he unveiled a plaque alongside Chairman of Tiglin, Aubrey McCarthy.

A lengthy speech delivered by President Michael D Higgin's at the launch of the Jigginstown Manor centre has allegedly been criticised by some government ministers.

Yesterday, the President criticised the current status of the housing market in Ireland, referring to it as 'a disaster.'

The Irish Independent reports that Michael D Higgins' comments at the launch of the centre, which aims to help homeless people and/or those with addiction, had 'crossed the line,' according to senior coalition figures.

One of these figures also accused the President of standing on 'high moral quicksand,' while another said: "It was pure distraction so he can now get all the people saying he’s so right and so in-touch."

President Higgins also faced criticism last week after he made controversial comments on a recent church shooting, where 40 parishioners were shot dead on June 5 at St Francis Church Owo in Ondo State.

Specifically, the President warned against 'any attempt to scapegoat pastoral peoples, who are among the foremost victims of the consequences of climate change' for it.

He was later criticised by a Nigerian bishop who said he had claimed the attack was linked to climate change and food shortages.

The President yesterday denied that he linked climate change to a church shooting in Nigeria.

In his speech at Jigginstown Manor yesterday, President Higgins explained: "There has been an increase of 90 per cent in the homelessness of young people (in Ireland), and there are many cases about it to say that ‘the outlook is getting darker’, in relation to the middle part of this population.

"I feel that I as President have to speak very directly about this: housing and the basic needs of society should never have been left to the marketplace."

After a brief round of applause from onlookers, he added: "It is the mad, speculative money that is destroying our country, which we are welcoming, but we shouldn’t be."