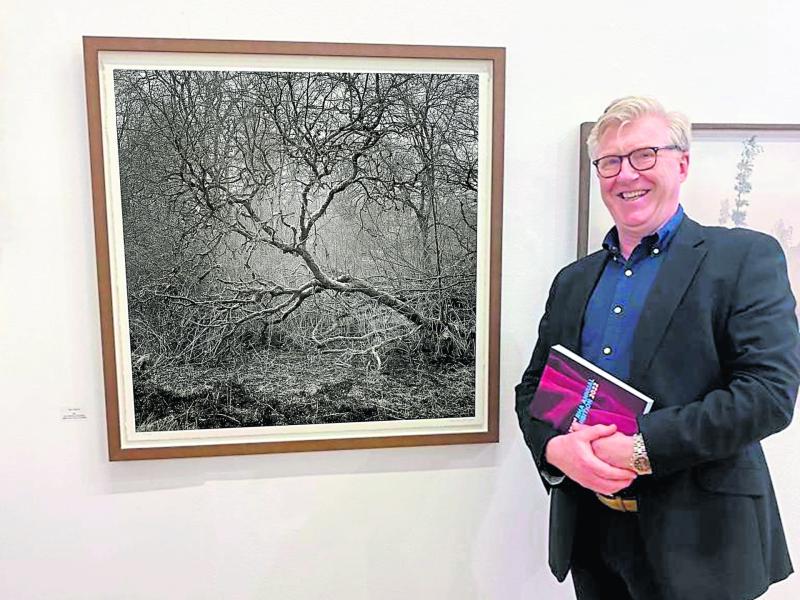 Tony G Murray with his work One Life Infinite Possibilities

Award winning Naas photographer Tony G Murray, of Murray Imaging Studios, was thrilled to receive the news that his photographic study of a willow tree was selected by Royal Hibernian Academy (RHA) Gallery for the prestigious 192nd Annual Exhibition.

A first-time entrant to the RHA Gallery open call, Tony was having the photograph framed by fellow Kildare business owner Niamh Harney, of Inniscara Bespoke Framing, when she suggested that he might consider submitting it to the RHA. The submission form required that the piece be named.

“I had taken the photograph during a family walk, on the Blessington Greenway. I printed some proof prints, put them on the wall of my studio and ‘lived with them for a while’. To me the image represented life and all the infinite decisions we make through our lives,” said Tony.

“ Around the same time, I was reading The Midnight Library by Matt Haig on the recommendation of my daughter Louise. I was really struck by the story of Nora, and the Library containing all of her possible lives, and hence the title One Life Infinite Possibilities.”

The selection panel at the RHA were apparently struck by the image and title and selected it to hang at the RHA Gallery in Dublin city for the summer months.

Out of over four thousand applications, just 567 works of 2D and 3D art were selected for the exhibition which opened officially on Monday, May 23.

Tony attended Varnishing Day with his family on Sunday, May22, and was thrilled to meet some of the biggest names in contemporary Irish art.

“I’m somewhat struck by the serendipity of being in the right place at the right time to take the photograph, my daughter suggesting the book that gave me the title and then to have Niamh give me a gentle push to submit it to RHA Gallery… it is indeed ‘One Life Infinite Possibilities’,” he said..

He added: “The response to the piece has been overwhelming. My Instagram accounts have been hopping and one visitor to the exhibition commented today to say they were ‘totally mesmerised looking at this in the gallery’. The warmth of the feedback has been fantastic!”

Tony was also responsible for the Thank You To The Frontline Workers signage in Naas during the pandemic and was awarded Landscape Photographer of the Year in 2009 by the Irish Professional Photographers Association of Ireland, IPPA.