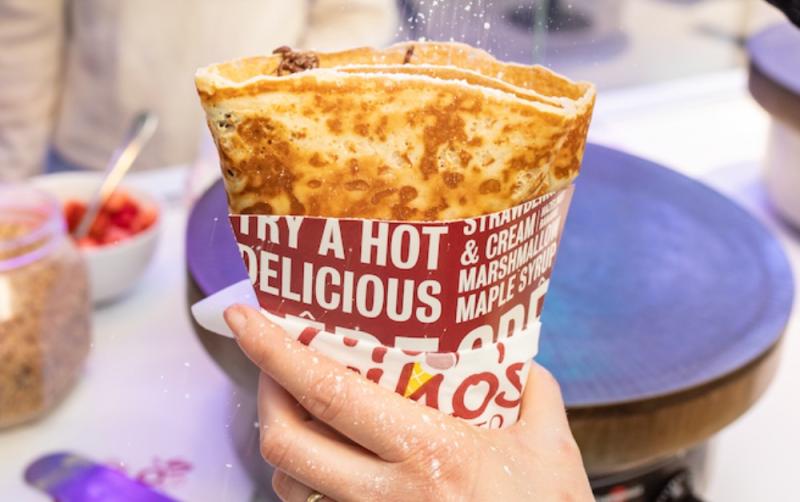 Pancake Tuesday has really crêped up hasn’t it? Some call it Pancake Tuesday, others call it Shrove Tuesday – we call it one of the best days of the year, and this year, it really is!!

This year, Gino’s Gelato is celebrating Pancake Tuesday, March 1 by giving away FREE crêpes to customers between 9am-12pm in stores across Ireland. Here in Kildare we are especially luck because have two Gino's Gelato locations. In Newbridge, in the Whitewater shopping centre and another Junction 14 M7 Motorway Service Area, Mayfield, Monasterevin.

Pancake Tuesday is always cause for celebration. Eating all your favourite things before the long drought that is Lent, sets in.

However, this year there’s even more reason to get excited, because Gino’s Gelato is offering FREE sugar & lemon and free Nutella crêpes from 9am to 12pm on Tuesday 1st March! And if you don’t get there in time for the free ones, you can also pop in whenever suits you and purchase from the extensive range on offer!

So, what’s the difference between pancakes and crêpes? The main difference is that pancake batter has a raising agent in it, such as baking powder or bicarbonate of soda, and crêpe batter doesn’t. This means that pancakes are thicker and fluffy, while crêpes are thin and flat. Generally, pancakes are associated with being ‘American-style’ while crêpes are the European take on the breakfast favourite (and our favourite too!)

In terms of the history of Pancake Tuesday, the fasting and abstinence of Lent were taken very seriously. Meat was banned and most Irish families ate only one small meal per day, probably potatoes, without the usual butter and milk! On the day before Ash Wednesday, all the rich foods in the house had to be used up. Eggs and milk were among these. The wily housewives of the time used them for pancakes, and the tradition has stuck. Pancake Tuesday is celebrated all over Ireland and in the UK too. In South America, Pancake Tuesday is called Mardi Gras – ‘Fat Tuesday’, which has the same religious connotations.