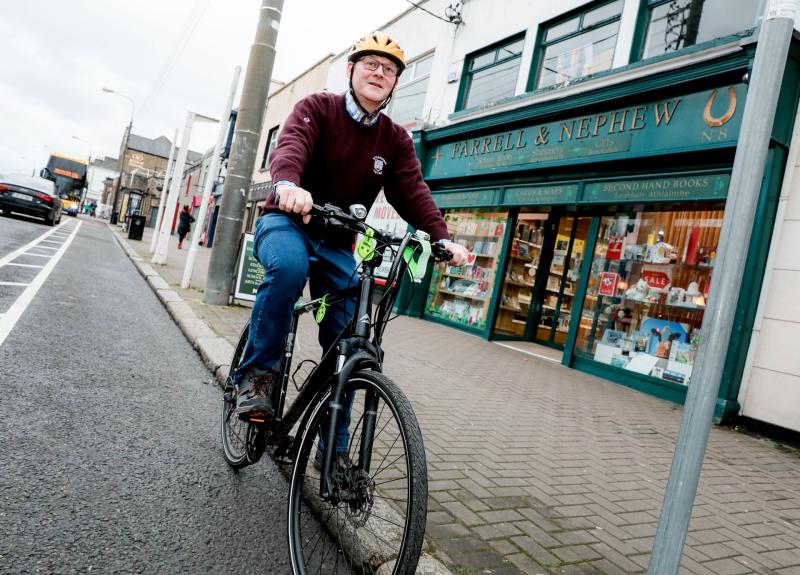 Local councillors claimed they received online abuse on social media due to the controversial cycle lanes in Newbridge — but a Kildare County Council official said that all feedback will be factored into a permanent design of the infrastructure.
The issue dominated the February meeting of Kildare-Newbridge Municipal District last week, held in-person at Arás Chill Dara in Naas, when Cllr Noel Heavey claimed some members of the public were verbally abusing councillors. Cllr Peggy O’Dwyer agreed she had been ‘subjected to hurtful comments’ over the issue.
Senior executive engineer and the council’s head of sustainable transport and traffic management, Donal Hodgins, told the meeting that all feedback received would help to inform the design and operation of a permanent cycle lane infrastructure.


He told councillors that no safety incidents were reported and added that the new narrower lanes for traffic were the standard width for an average street of a town the size of Newbridge.
He also insisted there was no reduction in spaces for people with disabilities.
Addressing the meeting, Cllr Peggy O’Dwyer said she fully supported the sustainable transport model.
Claiming she had been subjected to ‘very hurtful comments’ on social media, she said she had driven and walked along the cycle lanes, and that there were pinch points such as a bus stop area outside the Riverbank Theatre.
She queried if emergency services had seen an impact on the ability of vehicles to get through the Main Street.
Connecting the cycle lanes with schools was also needed, she added.
Cllr Tracey O’Dwyer said it was obvious that the public consultation process was not as robust or user friendly as it should be and she reiterated calls for a Traffic Management Plan for the town.


Cllr Chris Pender said that people who don’t interact with radio, local newspapers or social media must be catered for in any public consultation process.
Cllr Noel Heavey said that the cycle lanes change the experience of travelling through Newbridge.
He added that ‘people are going ballistic’ and verbally abusing councillors on social media
However, he said he talked to traders on the Main Street and they reported surprisingly little impact on business.

He added that he hadn’t seen any cyclists using the cycle lanes and he pointed out that the town should be a place where people come to do business.
Cllr Mark Stafford said maps produced for public consultation may not show the impact of infrastructure on the ground.
He added that motorists have the sensation of parking ‘in the middle of the street’.
Cllr Suzanne Doyle said that Newbridge is a key retail destination town due to the Whitewater Shopping Centre and the town itself is a ‘golden goose’ in the county due to its success and further potential.
Cllr Fiona McLoughlin Healy called for the NTA to be invited to a meeting to address councillors and officials.
Mr Hodgins said that feedback had been received by the council less than 24 hours after the paint was dry.
He told the meeting that an example of two dumper trucks couldn’t pass on the Main Street — but he asked why these vehicles were passing through the town.


He added: “The scheme is successful. There are no incidents or accidents reported to us and no concerns from emergency services.
“It’s a big change for people but we’re in a climate emergency. We’re implementing national policy.”
He added that due to the feedback coming in on the temporary cycle lanes, we are now living through a real-time consultation process.
Mayor of the MD, Cllr Rob Power said that the flaws in the system are temporary and can be fixed.
Mr Hodgins also said that the scheme wasn’t simply down to people drawing lines on a map.
He added: “There are very qualified people such as chartered engineers. We know what we are doing.
“Thousands of people have accepted it and not got angry or written comments.”

The council had successfully applied for funding for the ‘buffered cycle lanes’ from the National Transport Authority; and had initiated a public consultation process in October — but only a small number of submissions were received.
The council has insisted that public feedback is still welcome on the project through its website.
When asked about the cost of the infrastructure, a council spokesperson said recently: “This project, providing temporary cycle infrastructure in Newbridge is still ongoing.
“The full cost of the project, will be borne out once the overall project is complete.”
In relation to how long the cycle lanes will be in place, the council added:
“The infrastructure has been installed on a temporary basis and will continue to be monitored and a timeline decided upon.”