Feature: Adventures of Kildare couple who cycled across Europe to Asia during pandemic 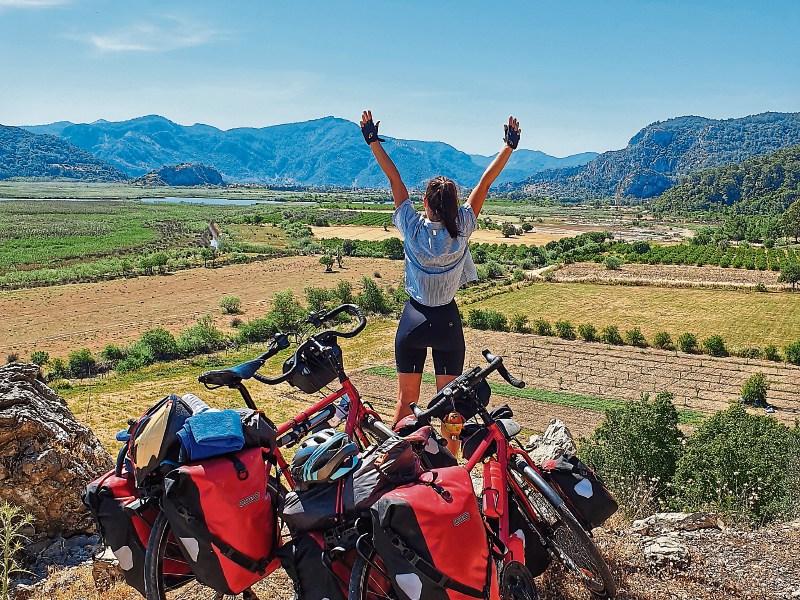 Two County Kildare residents whose self propelled journey took them across Europe and to western Asia are tentatively planning a return trip — but it may be in a camper van.

Couple Colm Larkin, 48, and Samantha Paton, 36, from Eadestown and Blessington respectively, took the easy way home in October, when they flew home from Turkey, via Tenerife and Germany.

The flight marked the end of a testing cycling trail during which they encountered mosquitoes, thunderstorms, spiritual Italians and lunatic Croatian drivers.

It was, with no exaggeration, the trip of a lifetime.

“We always loved to travel, ever since we met 15 years ago we always talked about seeing the world. One day I said to Sam ‘do you want to cycle around it ?’, thinking she would laugh, but she lit up with excitement.”

The pair began saving their money, as much as they could for two years.

They quit alcohol for six months, stopped going out for dinners and there were no new clothes or holidays.

“It was really tough at times but we knew at the end that it would be worth it,” said Colm.

They bought two Trek model bikes and they handed in their notice at their workplaces. But Covid-19 put them and everyone else into lockdown and temporarily scuppered their plans.

By this time they had rented out their home so they moved into the house owned by Colm’s parents, which was temporarily vacant. They had to vacate the house and just as it looked as if they might have to find alternative accommodation, the lockdown lifted.

“We decided to go and got the ferry from Dublin to Cherbourg.”

They never looked back.

Having landed in France, they cycled the whole way down the west coast following the EuroVelo route, out towards Bordeaux then over the Pyrenees Mountains and into Irun in Spain — a trip that took just over a month.

And all of this was done by pedal power alone. The couple did not avail of trains, buses or taxis or any accommodation apart from their tent.

And they used a pocket rocket stove to cook food bought in Aldi or Lidl stores. 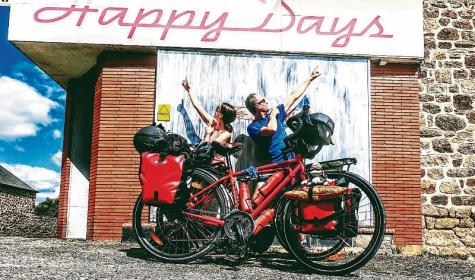 The couple on their journey

They got lost every day cycling through France.

“We camped through four thunderstorms, which was scary to say the least, so much so that we decided to get a hotel room for one night only — and then to find out we’d booked it 400 kilometres away.”

They got back on the bikes and endured a heatwave with temperatures of 37 degrees celsius.

From Nice they went to Monaco and into Italy, roughly following the Po river “where we got eaten alive by mosquitoes day and night. We were bitten hundreds of times over the period in Italy. Apparently the rice fields in Piedmont attracted them. We would pitch our tent just to eat lunch away from the mosquito.”

Luckily, he escaped serious injury when he crashed into a bus stop at speed in Trieste, escaping with a minor foot injury.

They visited Venice where tourism numbers were down by 95% because of the pandemic; and went on to Slovenia and Croatia where they were nearly mown down by an ambulance and then a car. As the weather deteriorated they got a ferry to Patras in Greece where they tested negative for Covid-19.

The pair’s risk of contracting the virus was extremely low. “You won't get better social distancing than cycling and sleeping in a tent,” said Colm.

Among the problems they encountered in Greece was wild dogs.

“Now to explain about wild dogs, we never really had a problem in any other country so far until Greece. When we say wild dogs we mean wild, these guys are massive and extremely vicious. We were attacked daily and this really started to take a toll on Samantha so much so we were considering leaving Greece.”

They came close to leaving but they figured out a way to calm the animals “by stopping the minute they attacked us and putting the bike between us and them and walking away very slowly”.

He added: “This took a bit of courage at the start but it definitely was a game changer and we were able to carry on cycling Greece.”

In Turkey they discovered that Istanbul is not for cyclists.

They decided to leave once Covid-19 restrictions were imposed.

“We didn’t want to cycle out of the city at a time when everyone was trying to leave, we needed to get a bus outside of it before their services stopped. We cycled 10kms through chaos to the main bus station with Colm nearly getting knocked down twice. It was absolutely crazy and we advise, if at all possible, to avoid cycling in the city,” said Sam.

They went through various towns in Turkey and at times they weren’t quite sure where they were headed.

“We carried on along the coast all the way to Kusadasi where we found a lovely campsite and rested for a week. Our visa was running out so we decided we really wanted to see the amazing Cappadocia but knew we didn’t have time to cycle all the way there so with the help of a bus we arrived in Goreme,” said Sam.

The village houses there are carved out of the rock the cave dwellers lived in thousands of years ago.

“With its fairy chimneys and stunning views we were delighted we made the decision to come here. We wild camped in rose valley and that morning we woke up to hundreds of hot air balloons surrounding us as they climbed up in the sunrise sky, a sight that will stay with us for the rest of our lives.”

It was now time to come home and it broke their hearts. They say the decision to do the trip was the best they ever made because, they say, words can’t describe the experiences they had, from some of the hardest days of their lives to the feeling of true freedom by not knowing where they would sleep that night.

And they met some of the most generous and kind people whose inclination was to help in any way they could.

“Most of all it has changed us from who we were, to becoming grateful for everything we have and we are now two very positive people with a totally different outlook on our life, recognising how beautiful this planet is. We learned that no matter how hard your day is do keep a good attitude because there is always something new and amazing right around the corner.”