Can you help Mario Corrigan? 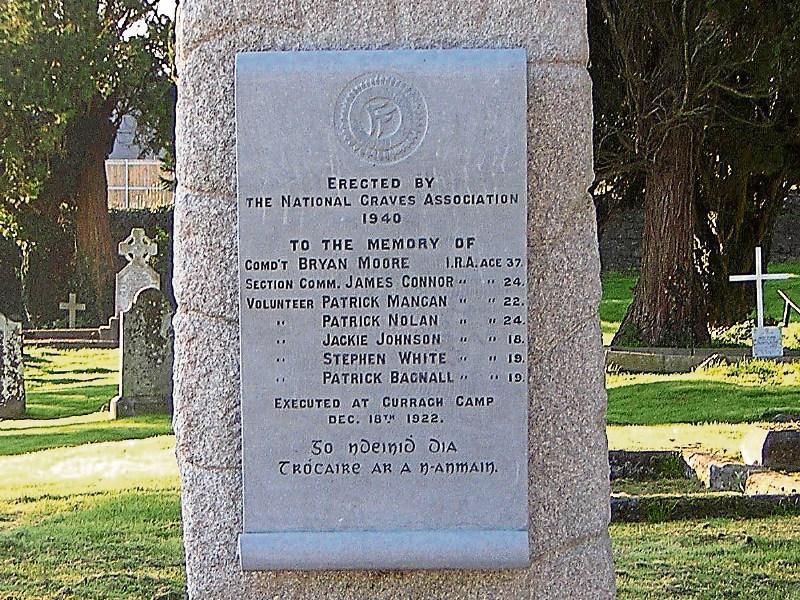 Kildare local historian and author Mario Corrigan is currently researching the seven men from Kildare, Milltown and the Rathbride area who died by firing squad on December 19, 1922, in what was the single largest execution during the Irish Civil War.

The men, who ranged in age from 18 to 37, had operated as an Active Service Unit in the Kildare/Curragh area and had been mostly responsible for attacks on the railway lines from Newbridge to Cherryville. They did so under the threat of facing the death penalty if found under arms.

National Army troops had been searching for them and on the night of December 12 and 13, 1922, they found 10 men and a quantity of arms, ammunition, and explosives in a dug-out at the Moore family farmhouse at Rathbride Bridge (Mooresbridge). Ten men and one woman (Annie Moore) were arrested, and the men transported to the Curragh Camp.

It was reported that Thomas Behan of Rathangan was shot and killed while trying to escape that very night and after trial by military court seven of the renaming men were executed on the morning of December 19. Behan’s body was returned to his family for burial, but the bodies of the seven were buried in the prison yard at the Curragh Military Prison (the Glasshouse), until they were eventually repatriated in 1924.

Six of the men were re-interred at Grey Abbey graveyard in Kildare Town where a monument was later erected by the National Graves Association. A Celtic cross was unveiled in 1935 by republican priest Fr Michael O’Flanagan on the Market Square in Kildare town.

This story needs to be told: the story of the men and the heart-breaking story of Annie Moore whose brother and fiancé were both executed while she was in prison in Dublin. But also, the story of the families who were left behind.

Mario is looking for any information or anecdotes people may have on the executions and the Rathbride Column, as they were termed by historian James Durney; any photographs, memorial cards, medals or other ephemera that could be copied or photographed so that the story of the Curragh executions can be told in full.

Over the years descendants of these men and women have been in touch from as far away as the UK and Canada but there may be other relatives and local families who would have heard accounts of what happened which would be useful. There is a need to talk of the tragedy and to bring the events to light in time for the centenary of the executions in 2022; this December we will mark the 99th anniversary of the executions but it is still a mystery to many people.

Mario grew up in Kildare town where, he says, the event was not spoken of. The first time it was publicly discussed was in 2003 when AJ Mullowney delivered a lecture to Cill Dara Historical Society.

Recently Mario Corrigan and James Durney published a booklet on Thomas Behan which is free to download or collect through Kildare Library Service, the Decade of Commemorations Committee and the County Kildare Federation of Local History Groups.

Those men from the Rathbride Column who were executed were officially recorded as:

Annie Moore, Rathbride, was arrested on the night of the men’s capture and Thomas Behan was killed that night.

If anyone has information on these men and this woman or information or ephemera relating to the executions please contact Mario Corrigan at mariocorrigan@gmail.com or 086 8913274.