Kildare book review: Glories of the Curragh is an absolute gem

The Curragh: beauty, historic, sporting, iconic buildings and much, much more 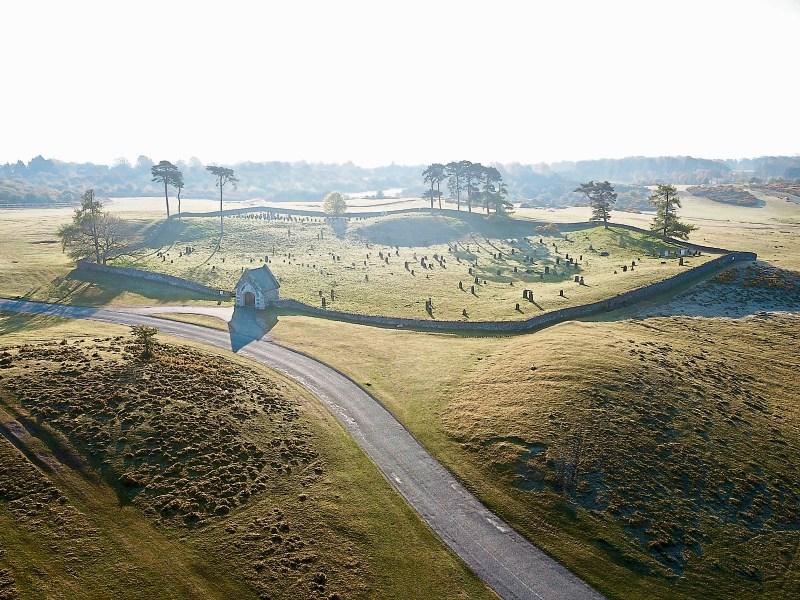 Aerial shot of the Military Cemetery, The Curragh

Springtime on The Curragh,

A wondrous place to be,

Stand, gaze and feast the senses,

As far as eye can see.

The blooming furze of yellow,

The lambs all dancing, playing;
Jockeys’ silks at starting gates.

The opening two verses of Glories of the Curragh, a fourteen verse poem that encapsulates everything, about the magnificent plains of the world renowned Curragh of Kildare.

A recent publication by Brownstown native, Don Kelly, titled the same, Glories of the Curragh, relives, recalls and remembers the history, the life, the happenings, the folk, the structures and all the various sporting organisations from racing to Gaelic football, to rugby, to soccer, to golf, to pitch and putt, in fact any, and every sport that was played and enjoyed down the years.

Personalities in abundance from world famous jockeys, trainers and owners; to international sports men and women, to some of the footballers and hurlers who had connections, in many shapes and forms through the Defence Forces.

This publication though, is not jut for those who could be widely described as ‘locals’ but is a fascinating read, nearly 200 pages (A4) size, expertly designed and printed by Donovan Printers of Newbridge, and no doubt will be enjoyed by many who possibly never set foot on the Shortgrass of the Curragh plains.

On top of that there are some brilliant colour pictures, many from bygone days; lots from recent times and many shot specially for the publication. Pictures that cover historic buildings such as the original wooden church, the Curragh Picture House that was burned down in 1989; well known and much loved premises such as Reggie’s Barbershop; many shots of the early days of the Curragh Racecourse, grandstand and much more. 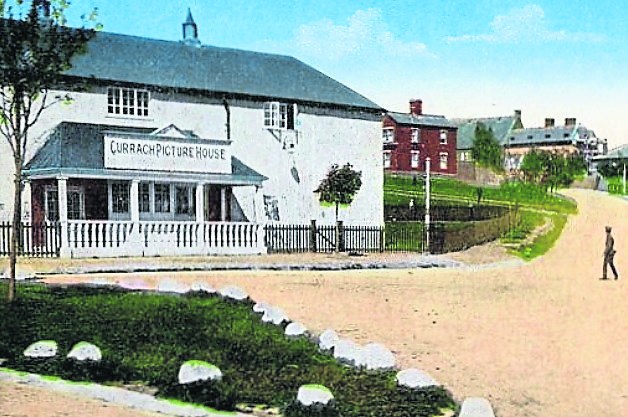 Sporting events are covered that will bring back incredible memories and recall great events down the ages.

In all there are no less than sixteen chapters that include content on Great Jockeys; Other Tales of Woe; Great Glories; The Pictures; Maddenstown Memories; Walsh’s Hill; The Chapel on the Hill; The Twin Towers; Ireland’s Oldest Golf Course; Curragh’s Queen of Golf; Race Track of Greatest Fame; Playing the Game; Paul Doyle – The White Streak; The Boiler White; Top of the World; Brigid’s Cloak along with an addendum on The Wren and the Prince; The King’s Horses; Ambush II; Algy Anthony; Motor Racing on The Curragh; Donnelly’s Hollow; Jack ‘Nonpareil’ Dempsey and Down Memory Lane.

The piece on Jack ‘Nonpareil’ Dempsey tells of the renowned Athgarvan native boxer, born John (Jack) Kelly, who later took the name of his step-father, after his mother remarried following his father’s death. The family moved to the United States where Dempsey became the first world middleweight boxing champion in July 1884. Renowned as a supreme stylist, in an age of sluggers, he was so admired and respected that other boxers in the States afterwards adopted his name in tribute, including one of the greatest heavyweight champions of them all — Jack ‘The Manassa Mauler’ Dempsey.

But hush now – just a while,

I sense the greats of yesteryear

Rush up The Curragh Mile.

Aubrey’s on the outside,

Morny’s got the rails;

Burns, Canty up the middle;

Such legends – oh what tales!

The written word calls the exploits of three jockeys who dominated the first half of the 20th century, the Irish man Joe Canty; the Englishman Morny Wing and the Scotsman Tommy Burns and as these three great riders were riding into the sunset who comes along but Aubrey Brabazon, a rider equally effective on the flat or over the jumps, some brilliant pictures included in a fascinating piece.

The great Dermot Earley and John Joe Reilly careers are recalled and relived.

Maddenstown Memories recalls the time of the Fair of the Furze, an annual event that was held at French Furze in the Maddenstown area, that actually began with a hurling match in 1740 and continued in various forms for over two centuries.

The Post Office, a landmark building of The Curragh Camp; the Military Museum, the Military Hospital and the various businesses that operated down the years in the Camp, from Butchers and Bakers, Shopkeepers, Shoemakers, Barbers and Drapers and a myriad of other enterprises. 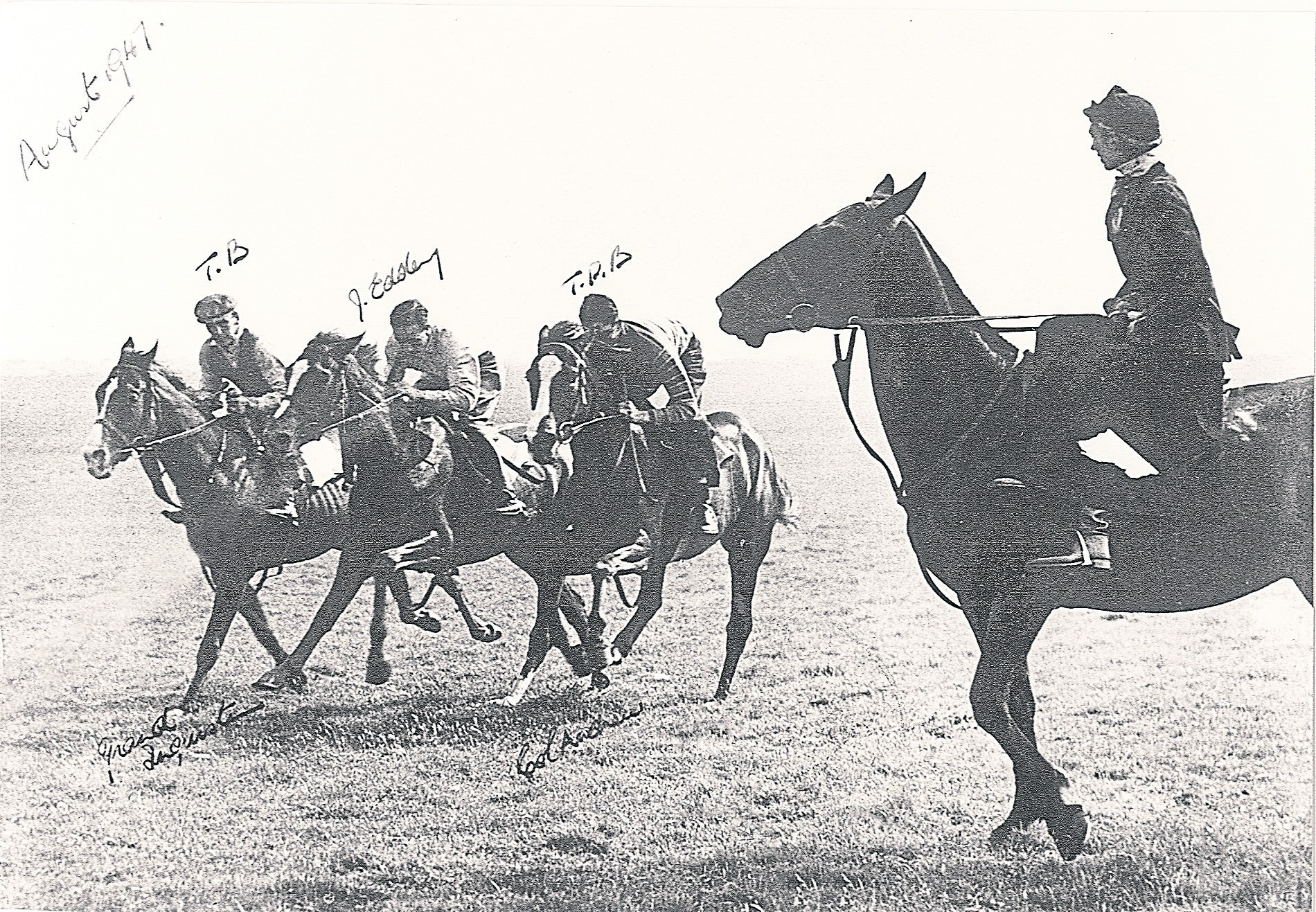 Two of the most famous landmarks in the Curragh are The Twin Towers and the Clock Tower, brilliantly captured.

For many when they think of the Curragh it is golf that springs to mind instantly and the oldest golf course in Ireland is extensively covered with some brilliant pictures of characters from days long gone and indeed more recent times.

One picture is of the author himself, Don Kelly, receiving the Captain’s Prize in 2006 from captain of the day Martin Ryan, the final captain’s prize played on the old course. It was the winner’s fortieth attempt before he finally brought home the bacon (never give up hope).

Some great memories recalled in both word and picture in this section, from the initial days of ‘The Bunnies and The Tigers’ to a fascinating insight to a gent who was well-known to members and visitors alike, Head Steward, Jim Donnelly, his tenure in charge and a hilarious insight into how Jim and the club finally parted company after some 15 years.

A headline from the New York Times in 1985 read: ‘Lillian Behan wins title in British Amateur Golf’ which of course recalls that brilliant success, among a host of golf events won by the Curragh’s Queen of Golf, Lillian Behan.

A chapter headed: Race Track of Greatest Fame – Curragh Racecourse — receives special mention and recognition, recalls many of the famous horses, jockeys, trainers and personalities including many visitors, from Jackie Kennedy to Bing Crosby, again some top class picture coverage.

Paul Doyle one of the greatest players to don the white of Kildare, and one closely associated with the Defence Forces on the Curragh, is recalled, among many great sporting greats, all the way up to the 1998 and Kildare’s Leinster final success and All-Ireland final participation, with Anthony Rainbow featuring prominently.

That’s just a flavour — and a brief flavour at that — of this magnificent publication that really is a joy to behold, not just to Curragh personnel, Defence Forces personnel, Kildare personnel but anyone who has an interest in history, in the Curragh, in sport and much more, finished off with some delightful verse including A Stepaside Stroll and Childhood Memories in Cut Bush by the author.

A truely treasure chest is the Glories of the Curragh,
as the final few verses of the poem of the same name testifies to:

The Curragh is the place to be if you want to play the game.

And champion pitch and putt,

A Paradise for walkers

And those more fleet of foot.

From Brigid’s Cloak to Church of Oak,

The Curragh of Kildare,

Will always hold its Glories

Through Triumph and Despair.

Glories of the Curragh available at bookshops:

or directly from the author at: donkelly40@gmail.com. Highly recommended: €20.