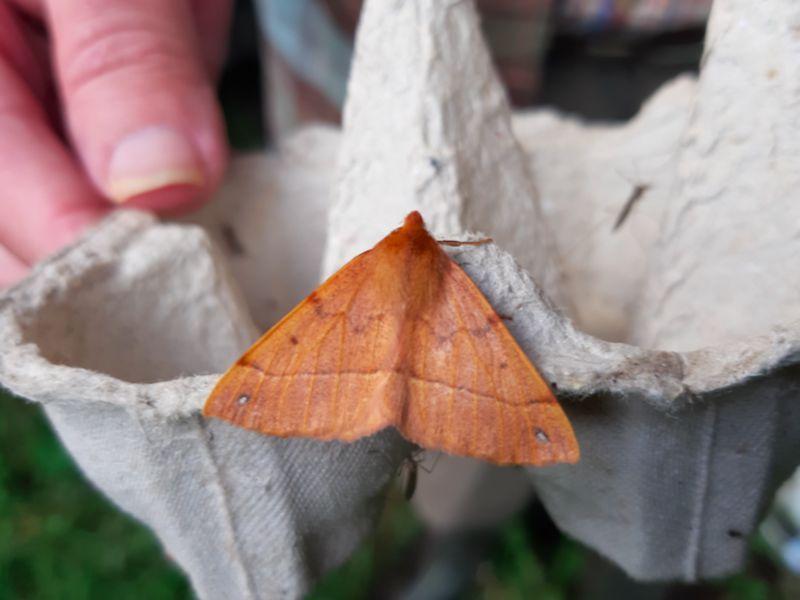 The Feather Thorn moth is considered common in Ireland, although I only recently got the opportunity to experience this species with the help of a light trap which was set the night before a recent visit I made to a peatland in Co Roscommon.

This species can be found in broadleaved woodlands, parks and gardens nationwide.

The caterpillar of the moth feeds on broadleaved trees including birch, hazel, dog-rose, willow and blackthorn, to name a few.

As these food plants are important for the Feather Thorn moth to complete its lifecycle, their presence in an area will determine if this moth will be resident or not in your local community.

The adult is on the wing from mid-September to December, so now is the ideal time of year to identify this moth.

The wingspan is between 35-45mm and you can identify this moth from its autumn reddishbrown wing colouring.

The wing colours are not by chance, considering this moth is an autumn flying species. The colours help to camouflage it between the autumn leaves falling from the trees, helping to protect it from predators looking for their next meal.

You can distinguish between the male and female of this moth species by their antennae. The males have feathered antennae while the females do not.

This reminds me of the Emperor moth found on boglands as, similar to the Feather Thorn moth, the males have feathery antennae.

The reason for this is the female releases a pheromone or scent to attract the male, and the male’s feathery antennae support them in locating the females in their area.

I believe the Feather Thorn moth I encountered was a female, as the feathery antennae of the males are easily distinguished.

The females will lay their eggs on the caterpillar food plant by December and the eggs will over winter before the young caterpillars emerge next spring, beginning this moth’s lifecycle all over again.

If you would like help identifying local wildlife or indeed like to share your images of local wildlife encountered to be used in a future Wildlife Watch column, contact me on 045 860133 or email bogs@ipcc.ie.