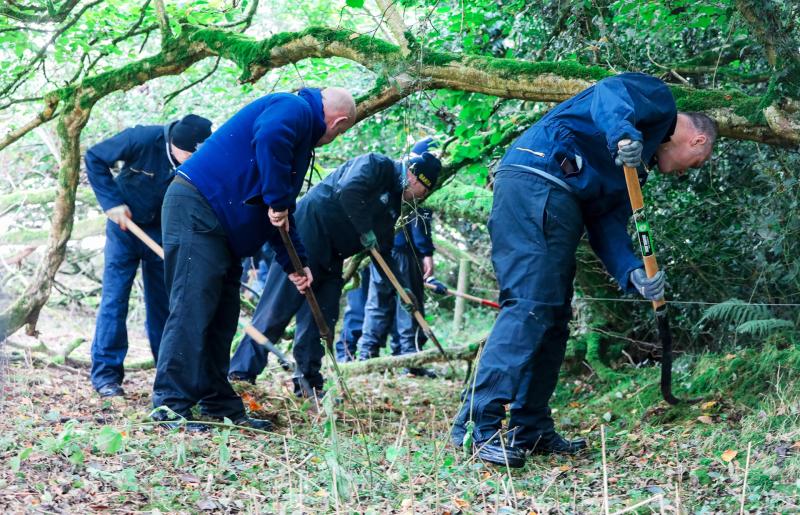 Gardaí searching the wood on the Kildare/Wicklow border on Monday / PHOTO: AISHLING CONWAY

As gardai continue to search a remote wood in the Deirdre Jacob murder inquiry, a local Senator revealed the missing woman's 42nd birthday is tomorrow.

Senator Fiona O'Loughlin told the Seanad today that the family suffered "years of awful torture" since the Kildare student disappeared aged 18 in July 1998.

Gardaí began the search on the Kildare/Wicklow border on Monday and said it was prompted by suspicious activity seen there on the day Deirdre disappeared just metres from her Newbridge home.

Senator O'Loughlin said: " All our thoughts and prayers are with the Jacob family in the hope that they will find some form of resolution for their beautiful daughter Deirdre who disappeared when she was 18.
"If she was alive, she would be 42 on Thursday and that puts it into context in terms of the years of awful torture that the family has suffered."
Senator O'Loughlin - who described the family as "much loved members of the community" - said her grandfather and Deirdre's grandfather were friends.
Speaking in the Seanad chamber: she added: "It's important to show solidarity with Deirdre's parents and let's hope that there is some form of closure and that they will be able to find their beloved daughter and to bring her home."
Up to 15 gardaí are involved in a painstaking examination of the three-acre wood which could last three weeks.
Significantly, the search site is about 15km from the last-known sighting of another missing woman Jo Jo Dollard - in Moone village in 1995.
The search is being carried out by a Divisional Search team which is drawn from garda stations within the Kildare Garda Division.
The operation is being managed by a Crime Scene Manager from the Garda Technical Bureau and a forensic archaeologist is on site each day.
A mobile incident room has been set up in an adjacent field for the duration of the search and hi-tech drones are also being used by gardai.
The area is 15km from where convicted rapist Larry Murphy lived at the time of Deirdre's disappearance and also close to where he was caught with a woman whom he had abducted and raped.
Murphy has always denied any involvement in the disappearance of any of the missing women in the Leinster area.