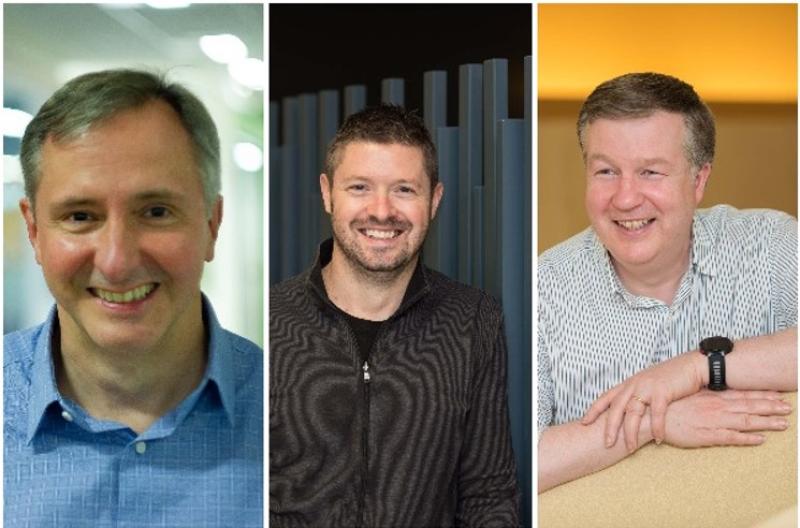 Last year Intel announced that Ann-Marie Holmes, previously the Factory Manager of Fab 24, Intel’s advanced manufacturing facility in Leixlip, Co. Kildare, had been named as Co-General Manager of Intel Worldwide Semiconductor Manufacturing a role that she assumed in addition to her responsibilities as a Vice President of Manufacturing, Supply Chain & Operations Group.

Following this change, and taking into consideration the planned growth of Intel’s manufacturing operations in Leixlip over the coming years, three new factory managers have been appointed at Intel Ireland – Neil Philip, Joe Bolger and Joe English.

Each of the three appointees are previous department managers in Fab 24 – Intel’s leading edge manufacturing facility in Ireland. Since first coming into operation in 2004, the Fab 24 facility has become a key production location for Intel’s 14nm products, ensuring that leading-edge silicon microprocessors, manufactured in Ireland, are at the heart of technology innovations that are essential to the way we learn, live, and work today. The Ireland fabs are also poised to play a role in Intel’s foundry plans as CEO Pat Gelsinger recently announced plans to establish committed foundry capacity in Ireland to support Intel’s automotive customers in the European region.

Today, more than 4,900 people work for Intel in Ireland with the total investment standing at $22 billion, the largest private investment in the history of the Irish state. Each year Intel contributes €1.08 billion to the Irish economy.

Ireland is also part of Intel’s global manufacturing site expansion plans. Construction activity began in early 2019 on the multi-year project that will double the available manufacturing space in Ireland. In March 2021 Intel shared that $7 billion dollars has been invested in the construction project so far and that it is a planned location for the latest generation Intel 4 technology. Construction activity is well advanced and tool installation will begin by the end of 2021. The project will create 1,600 full time roles once complete and will involve 6,000 construction workers at its peak.

The three factory managers will share responsibility for the existing operations and future manufacturing capacity that is under development in Ireland.

Neil Philip
Neil is a proud native of Aberdeen, Scotland but has lived in Ireland for 28 years. He studied engineering at the University of Edinburgh and has also completed an MBA. Neil is passionate about the value that science/engineering/ manufacturing brings to our society.

He joined Intel in 1991 after 3 years in the industry with Motorola. He began his Intel career on assignment in the D2 technology development centre in California and went on to complete numerous U.S. based assignments.

Neil is married to Sligo woman Ettie for 25 years and has 2 children – Alastair who is studying engineering and Ciara, a music student.

Neil is an outdoor enthusiast and loves cycling with his local club in Dunshaughlin County Meath, walking, falling off a surfboard, supporting Alastair’s soccer team and Ciara’s camogie team, and the odd game of golf.

Joe Bolger
Joe grew up just outside Waterford City and attended school in De La Salle. He enjoyed plying hurling in his younger years with Roanmore Hurling club and has been a loyal Deice supporter ever since.

Joe is a graduate of the University of Limerick where he did a Production Engineering degree. He also completed an MBA at University College Dublin. He worked for a time with Carton Controls in Waterford before joining Intel in 1999. Joe began his Intel career in the lithography team and has worked in a number of different functional areas within Intel’s fab organisation. He has also completed numerous assignments in the Intel network to support technology startups.

Joe is married to Hannah and has 3 young children – Sam, Noah and Sadie. Joe enjoys running to get some exercise and likes to golf.

Joe English
Joe is originally from Abbeyside, which is right next to Dungarvan in Co. Waterford. He went to secondary school in St. Augustine’s College in Dungarvan. Joe studied Electrical and Electronic engineering in University College Cork from 1986 to 1990 and joined Intel as a graduate in 1991.

Over his 30 years at Intel Joe has worked in a variety of engineering and management roles within processing engineering. He has worked on a number of technology transfer projects to the Ireland site during which time he completed 4 seed assignments in the U.S.

Outside of work Joe enjoys reading, travelling, eating out, movies, supporting the Waterford Hurlers and Liverpool football club and walks with the dog.