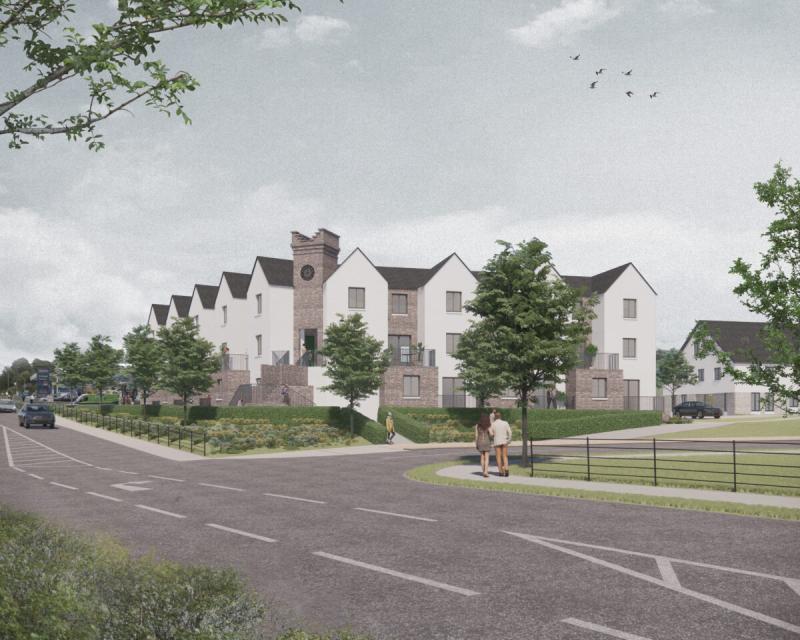 For the second time in two weeks, councillors representing Newbridge have expressed serious concerns about the size and density of a major housing plan for the edge of Newbridge town.

In the latest proposals, a total of 204 homes including 98 houses and 106 duplex apartments are planned by Dublin-based Glan Developments for the area off the Ballymany Road between Horse Racing Ireland HQ and the nearby Maxol fuel station.

An Bord Pleanala (ABP) is due to make a decision on the Strategic Housing Development on November 25. The chief executive of the council is due to send an official response to ABP on September 30.
The development will require the demolition of a derelict house and two sheds and the renovation of an existing cottage and shed.

The 204-home plan is at the other side of Ballymany Road to a 336-home plan debated by councillors last week.
Speaking at the montly Municipal District meeting on September 15, Cllr Suzanne Doyle said it was “just bananas” that a high density development of this kind is going ahead.
She added: “If there’s one thing that Covid taught us, it’s that people need more space to live and have recreation areas.”
Cllr Tracey O’Dwyer queried if there was adequate parking in the plans or a playground.
Questioning local community facilities, Cllr Fiona McLoughlin Healy asked: “Where are all the kids going to go to school?”
She added: “There isn’t a GP to be had in the town. I should know because I’m married to one!”
The councillor continued: “We have to ask is this a sustainable and live-able community. That is the problem with plonking these development onto the edge of towns.
“I’m not against development in general but Newbridge is choked by traffic and the Ballymany area is a blackspot for congestion at times.”

New households
Cllr Noel Heavey said there were currently hundreds of new households planned along the Ballymany Road area of the town.
He added: “We need to know where the children will be educated. Also — are we building on land which may be the site of a future school?”
Cllr Noel Connolly queried if there were enough places in the proposed creche for the number of homes. He also questioned if any electric vehicle charging points were planned as there will be a shift away from diesel and petrol vehicles after 2030.
The councillor also referred to a shortage of school places, GPs and dentists as well as high traffic volumes.
He added: “Newbridge is bursting at the seams at the moment.”
Cllr Mark Stafford said of the plans: “We’re having the highest housing densities at the extremeties of the town. We’re causing a saucer shape. It’s too dense.”
Cllr Suzanne Doyle said she was also concerned about the capacity of the creche and the number of parking spaces and if it was too close to homes.
Cllr Chris Pender criticised the lack of access to public transport while Cllr Kevin Duffy said he had concerns about the design quality of the dwellings.
Mayor of the MD, Cllr Rob Power asked if the homes were set back far enough from the M7 motorway to reduce noise levels.
Cllr Power also noted a delay in receiving the plans from An Bord Pleanala which he claimed gave officials and councillors less time to study the details.

Link road
Glan Developments said the proposed development will also include the construction of a 335m long section of a link road and a new right-turning lane at the proposed junction on the R445 (Ballymany Road).
The plans also include car parking, bicycle stores and bin stores.
The designs include landscaping, play areas and public lighting.
A design feature of the development is a “clock tower” which the developers said is reminiscent of the equestrian courtyards and estates common to the county of Kildare.
Earlier this month, a majority of local councillors said they were opposed to the density on a nearby site between Standhouse Road, Ballymany Road, the Elms residential area and Ballymany Stud Farm.
The proposed development will consist of the construction of 336 residential units consisting of 245 houses, 27 apartments and 64 duplexes.
The 12 hectare site has a construction value of €54m, according to the Building Information Ireland database.
The total floor area of all dwellings is 34,800 square metres.
The apartments are located in a part three-storey and part four-storey building and the duplexes are located across six two to three-storey buildings. The overall designs include a two-storey creche, car parking, bicycle parking, internal roads and bicycle stores. ABP is due to decide on November 10 on the plans. which also include play areas and public lighting .