Historian James Durney examines the activities of the feared Black and Tans in Kildare 100 years ago during the War of Independence, in May 1921 — and reveals the stories of some Kildare men serving on the side of the British 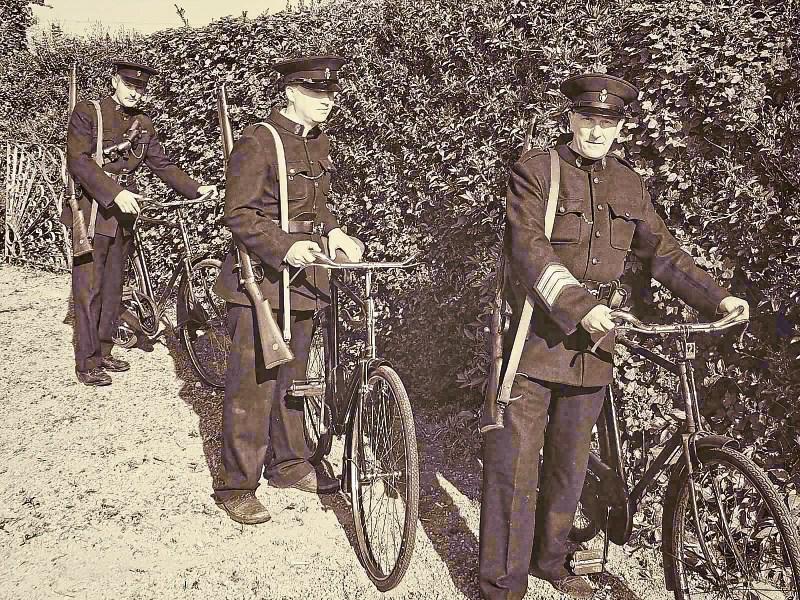 When recruitment to the Royal Irish Constabulary (RIC) was opened to residents in Britain, thousands of unemployed ex-servicemen joined up.

A substantial pay rise for Irish police from £2 11 shillings to £3 10 shillings per week helped boost recruitment at a time when there were about 167,000 ex-servicemen receiving unemployment benefits in Britain. These British recruits were promptly dubbed the ‘Black and Tans’ because they wore a mixture of British army khaki and RIC bottle-green uniforms — which from a distance looks black.

In early 1920, most of southern Ireland was boycotting the RIC, refusing to serve them in shops, etc, and uniforms could not be tailored for the police force leaving the new recruits wearing perhaps a constable’s trousers with a soldier’s tunic and a policeman’s cap.

The Black and Tans have earned their place in Irish history for their murderous and undisciplined behaviour. While most of these new recruits were British, a substantial proportion of the Black and Tans were Irishmen.

According to police expert and author Jim Herlihy, 10,936 Black and Tans were recruited, of whom 883 (eight per cent) were Irish-born.

The Black and Tans were not a separate force and lived and worked in barracks alongside the Irish policemen. Their number in each region was roughly proportional to the level of violence in an area, and they served mainly in the south and west where the IRA was most active.

Black and Tans were based at Naas, Athy, Kildare town and the Curragh Camp throughout the War of Independence. They were active in patrols throughout the county and took part in reprisal attacks at Naas and Kill in August 1920.

On Sunday night, May 11, 1921, as two tenders of RIC entered the village of Rathangan, they were fired on by a group of armed men. The tenders came to a halt as the IRA volunteers fled across nearby gardens with some police in pursuit on foot. There were no injuries to the RIC and two men were subsequently arrested.

One of those arrested was Jerome Dooley, from Main Street, Rathangan. He was interned at the Rath Internment Camp and released in late November 1921. Dooley later took the anti-Treaty side in the Civil War and was captured near Ballitore, on July 4, 1922. Held in Newbridge Barracks, he escaped through a tunnel on October 13, 1922.

A Kildare Black and Tan

The first six months of 1921 were by far the most violent of the War of Independence and as each month went by, they got bloodier.

On May 13, a general election for the parliament of southern Ireland was held. Sinn Fein won 124 of the new parliament’s 128 seats unopposed, although the elected members refused to take their seats.

Over the next two days the IRA killed 15 policemen. On May 17, 10 people died violently in attacks in four counties — three policemen, two soldiers, one IRA volunteer and three civilians, all of whom were ex-servicemen. One of the dead was a Kildare-born Black and Tan.

Curragh-born Constable Edmund Kenyon was on cycle duty on May 17, 1921, when he was killed in an ambush. The cycle patrol was proceeding over ‘wild country’ from Longford to Newpark, near Ballymahon, when they were attacked.

Their progress had been impeded by trenched and barricaded roads. About 3.30pm, the nine-man patrol was fired on by a larger party of IRA volunteers from 3rd Battalion, Longford Brigade.

Fire was returned and Const. Kenyon and a comrade took cover in a nearby house. As he went to a window to return fire, Kenyon was hit in the right eye and died instantly. Constables Hynes, Finneran and Crowe were wounded. Due to a shortage of ammunition the IRA then withdrew.

Edmund’s two older brothers, Charles and Frederick, had been born in England before the family moved to the Curragh Camp, where Edmund (1899), Alfred (1900) and Albert (1901) were born.

Their father, Charles was an army staff sergeant attached to the gymnasium. The family were not recorded in Ireland in the 1911 census, so they had presumably returned to England.

At the outbreak of war in August 1914 Edmund joined the British Army and served in France where he was gassed at the Battle of the Somme. He subsequently transferred to the Royal Navy, where he remained until the Armistice and his demobilisation. Kenyon then joined the Merchant Navy, but continual strikes left him out of work.

He joined the RIC on October 22, 1920, and was stationed at Lanesborough, Co Longford. In deference to family wishes, a quiet funeral took place at Plaistow, London. His widow Florence secured £1,500 compensation and his mother was awarded £500.

The Hampshire Telegraph of May 27, 1921, reported: ‘Married and then murdered within five weeks has been the unhappy fate of Mr Edmund Hamby [Hornby] Kenyon, 22, the third son of Mrs and the late Mr Kenyon, of Moackton-Terrace, Clayhall… His young wife, to whom he was married but five weeks ago, lives in the East End of London. A sad feature of the tragedy is that his mother is a widow, with seven other sons. all of whom, with one exception, are in the Services, and she has been dependent partly on help from the deceased.

‘Less than three weeks ago the deceased relented to Ireland from leave, and then promised his mother financial support.’

Funerals kept mounting as a further seven people died the following day — one of whom was Kildareman Constable Albert Edward Carter, who was killed in an ambush on an RIC patrol in Letterkenny, Co Donegal.

Albert Carter, 20, a Church of Ireland farmer’s son, joined the RIC on January 19, 1921, and was stationed in Letterkenny. 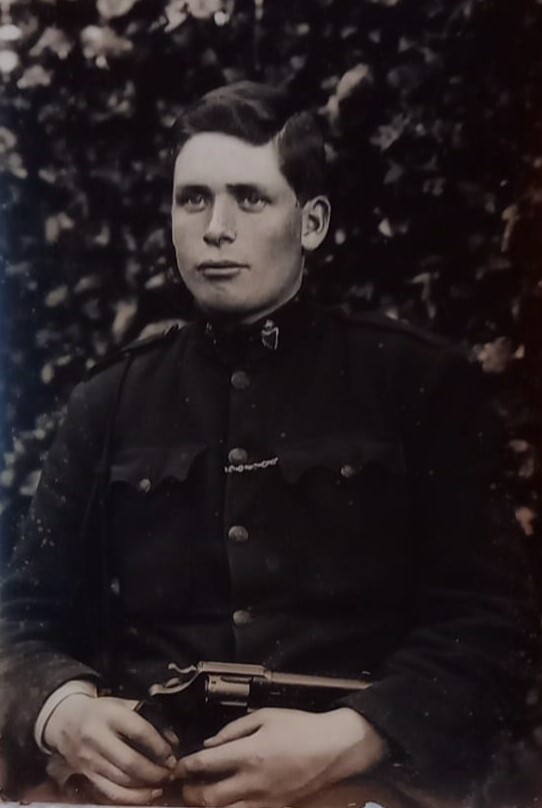 Const. Carter had nearly four months’ service in the RIC when he died. Albert was the sixth child of William Carter, a farmer from Grangeclare East, Kilmeague — another brother William, or Bill, had also joined the RIC.

On May 18, five policemen were on patrol in Letterkenny town centre. Three of them subsequently separated from Const. Carter and Sergeant Charles Maguire, who were stationed at No. 2 RIC Barracks, at the junction of Upper Main St. and the Port Road, at the west end of the town.

At about 11.10 pm as Const. Carter and Sgt. Maguire neared the post office on their return to No. 1 RIC Barracks, they were ambushed by a group of volunteers firing revolvers and throwing at least one grenade.

Const. Carter was hit by a revolver bullet in the throat. His death was probably instantaneous, the bullet severing the windpipe. Sgt. Maguire was wounded in the hip and leg by gunshots and returned the fire until he fell, exhausted. He managed to struggle to a house, where he was treated.

McCarry’s Hotel was badly damaged, the smokeroom windows being completely demolished, while pictures and mirrors were shattered. A large hole was torn in the floor by a grenade, while there were bullet marks in the ceilings and walls.

Minutes later the IRA launched a gun attack on No. 1 RIC Barracks on Lower Main St. There were no police casualties, but Black and Tans and soldiers were soon on the streets shooting wildly. Pedestrians quickly disappeared, several not getting to their homes until the morning, having taken refuge in the first available houses. A young civilian, Anthony Coyle, coming in from the country with a tin of buttermilk, received rifle wounds in the wrist and arm, while another young man Simon Doherty was hit in the foot by police rifle bullets.

Sgt Maguire, who had thirty years police service, recovered from his wounds. James Carter made the sad journey from Kilmeague to Letterkenny to accompany his younger brother’s remains home for burial.

A service was held at Letterkenny Protestant Church with clergy of all denominations attending, while all business premises were closed by order of the police. After the service the remains of Albert Carter were carried by his former comrades through the town as other RIC men marched alongside.

The coffin was then placed into a motor-hearse and brought to Co. Kildare. Albert Carter’s remains were interred in the family plot at Kilmeague Graveyard. His father, William, secured £550 compensation. 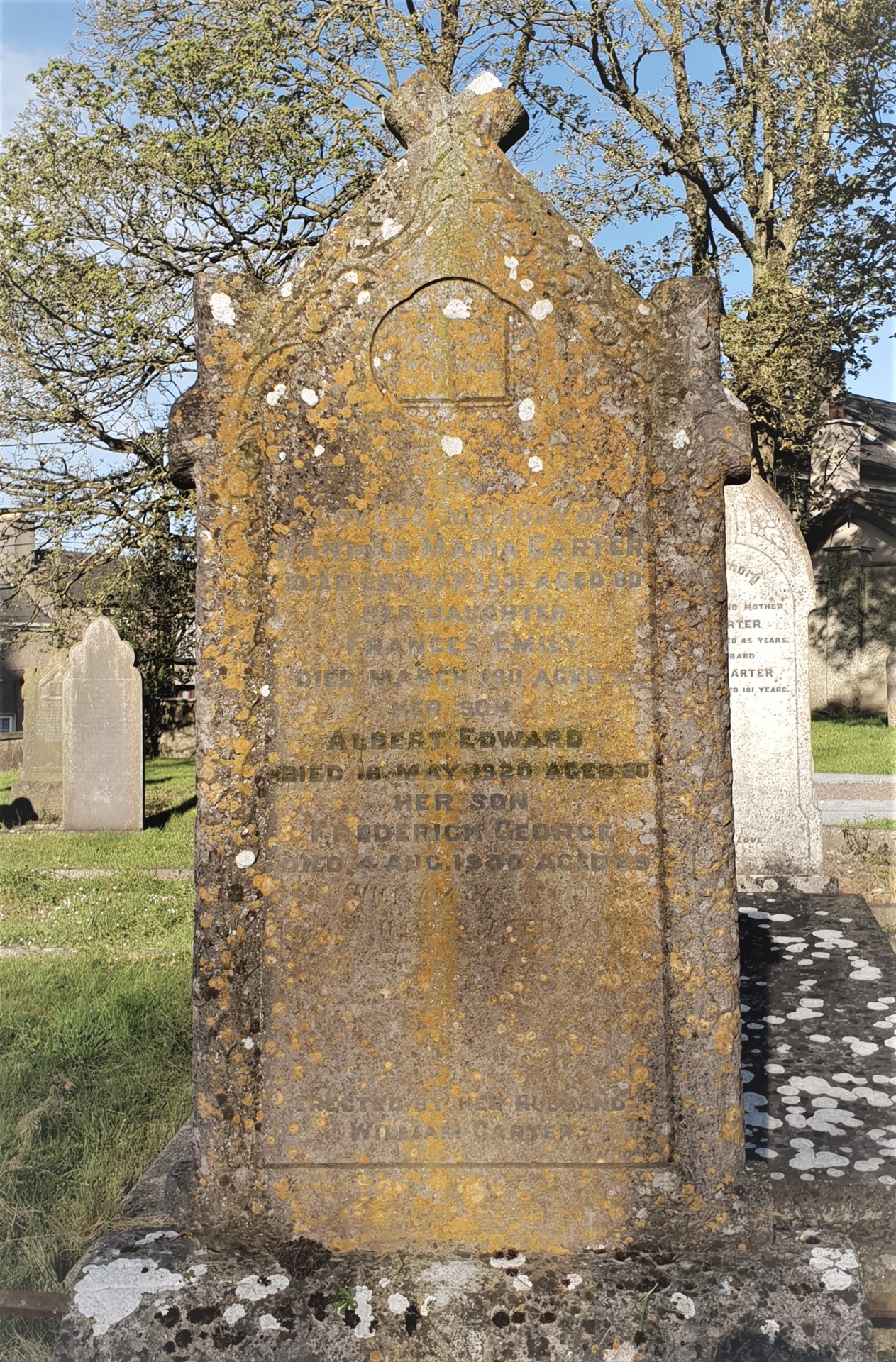 In Co Kildare, the local IRA were again busy. On the night of 25-6 May, the people of Kilcullen were awoken to the sound of rifle fire which occurred shortly after midnight and continued for about five minutes.

About 20 to 30 shots were fired from the corner of the bridge across the Liffey in the middle of the village and were directed towards the police barracks, some 50 yards away. The police did not return fire.

Around two hours later another 10 to 15 shots were again fired at the barracks. Again, there was no reply. Once more, about 4 o’clock in the morning there was a further discharge of shots, this time from a ruined house across the street almost facing the barracks. On the following morning there were several panes of glass found to be broken by gunshots and bullet marks were found on the gable end of the premises nearest to the Liffey bridge.

My thanks to Joe Murphy and Frank Dowling for help with this article.