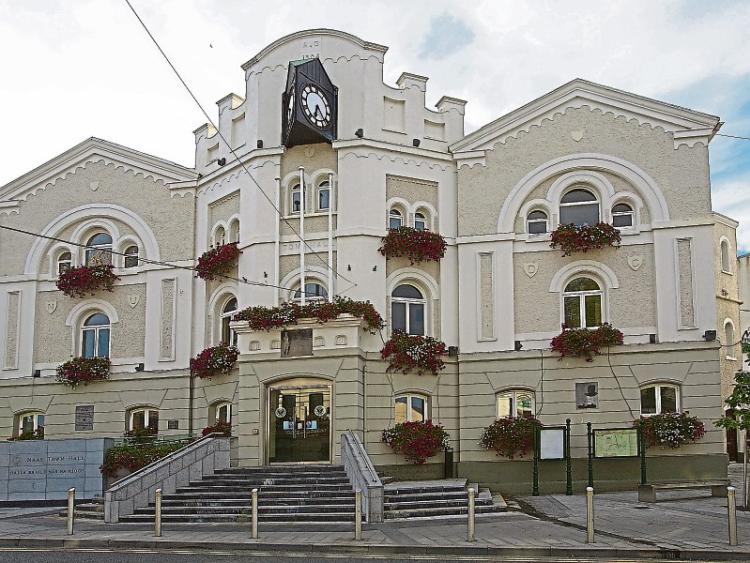 Naas Town Hall with its clock

A suggestion that the clock at Naas Town Hall should be powered by electricity instead of its own mechanism found little favour at a recent Naas Municipal District meeting.

The clock is not currently working because of a refurbishment project that’s taking place to provide a new library and cultural centre.

The clock in Naas has been a central feature of the streetscape of the county town since it was erected in 1866. It was put in place by public subscription not long after the town’s first town council took up occupation of the building, according to Kildare County Council.

The clock’s mechanism in the loft of the building is set in a cast iron frame bearing the name of John Chancellor, Dublin, who was a well-known maker of municipal turret clocks in Victorian Ireland.

The hourly tolling was produced by a striker hitting the bell mounted in a louvered shelter on the roof.

The façade of the Town Hall was reconstructed by John Eacret, local builder, in 1904.

This involved setting the clock dial at a greater distance from the mechanism than had been the case in the original 1866 configuration.

This in turn necessitated the installation of a longer spindle from the clock mechanism to the dials and it is this improvised linkage which has proven something of a weak link over the years meaning there is often a difference in time between the two clock faces.

As part of the conservation element of the redevelopment of the hall into the library and cultural centre Philip Stokes of Cork, a skilled craftsman trained at the Swiss/Irish School of Horology Dublin and who has been been involved in restoration and conservation projects on historic clocks throughout Ireland, was engaged.

His assessment was the clock is in good working condition and it has only stopped because it needs to be manually wound once or twice weekly — by someone who is trained in the winding and the adjustment of the clock. His advice was that as the staircase to the clock tower will be removed until the building work is complete, it is not safe or practical for a member of council staff to access the building on a weekly basis to wind the clock. He suggested that a temporary electrical mechanism should be put in place to wind the clock until the work is complete.

However Cllr Seamie Moore said the clock is unique and if it’s capable of working on its own it should be left to it.

“The clock is unique and it should not be turned into a cabbage-type clock,” said Cllr Moore.