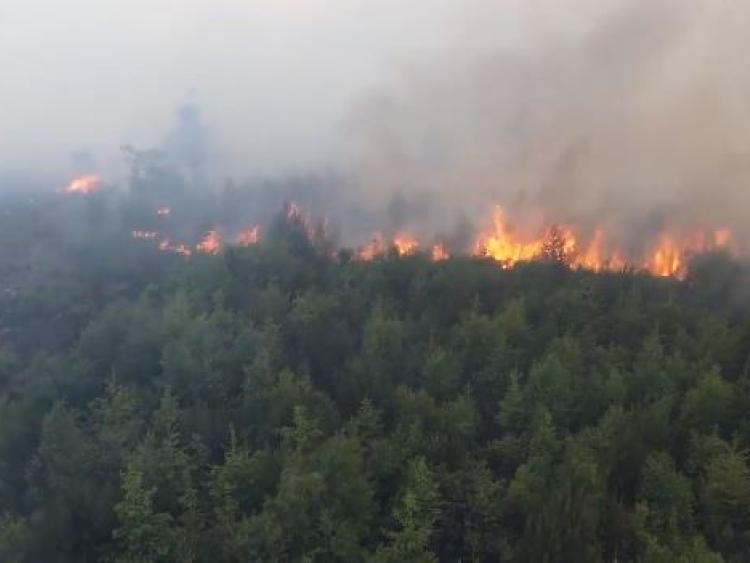 Kildare people out and about near forests during the Easter holidays have been warned not to light camp fires or barbecues outdoors as they may pose a potential fire hazard.

Last May and June, bog fires blazed and smouldered for a number of weeks in North Kildare.

The Department of Agriculture, Food and the Marine has issued a Status Orange forest fire warning nationwide.

With warmer and dryer spring weather, dead grasses, gorse and heather become much more flammable and fires can spread quickly from open lands to forests.
“Easter can be a peak time for forest fires as people venture out to visit woodlands over the holiday,” said Coillte’s national estates risk manager, Mick Power.
“We have seen a doubling to tripling of visitors to some of Coillte’s most popular forests since lockdown began.
“An unextinguished barbecue, campfire or burning of lands can be the start of a large and unintended blaze,” he said.
Coillte urges the public not to light fires in the outdoors such as campfires and barbecues and reminds the public that it is an offence to deliberately burn vegetation between the first day of March and the end of August.
In Coillte’s experience most forest fires in Ireland do not arise from natural causes.
“Forest fires in Ireland are not caused by spontaneous combustion but instead are caused by unattended fires, or campfires that are not extinguished,” said Mr Power.

Facts on fires
Almost 6,000 acres of forest land has been damaged by fire between 2016 and 2020 (5,892 acres)
There have been 584 forest fires on Coillte lands since 2016
Fires destroy the habitats of birds and animals, and this damage can take years to be repaired
Fires pollute the air and add to harmful CO2 emissions.
Fires can damage property and put lives at risk.
Damage and clean-up of forest fires cost €1.3m in 2020.
“We urge people to exercise care and not to light any fires in the outdoors over Easter,” said Mr Power, who added “it’s very important individuals don’t approach forest fires and report them to the local fire service immediately.
“We’ve had over 580 fires in the past five years and we can bring this number right down if we all work together.”
Forest fires pose a serious health and safety risk to the public, firefighters and foresters whose job is to bring the fire under control and prevent it from spreading to other areas.
Once fires become established, they are very difficult to control and cause considerable damage.
In 2020, Coillte estimate the combined costs of loss of crops to fire and clean-up amounted to €1.3 million.
Coillte recommends the following steps to prevent forest fires:
* Do not light fires and be careful regarding all activity involving fires;
*Report any suspicious activity;
*Report any forest fires you see to the local fire service;
*Do not approach forest fires under any circumstances, as they are extremely dangerous;
*Keep access points and forest entrances clear for emergency services.

Fires in 2020
Kildare Fire Service battled fires in bogs in north Kildare for several days last May and June.
Kildare Fire Service needed the assistance of Coillte and the Air Corps as well as local communities to extinguish the blazes.
An Air Corps helicopter dropped thousands of litres of bog water onto the fires despite extremely low visibility due to thick smoke.
It was estimated that up to 100 hectares of a Coillte forest were destroyed in the final days of May resulting in damage of up to €150,000.
Local firefighters from Maynooth, Naas and Leixlip were involved.
The Air Corps used a 1,200 litre bambi bucket attached to the bottom of an Augusta Westland AW139 helicopter to help douse fires.
The fires were mostly located in the Donadea, Timohoe and Hortlands areas.
Kildare Fire Service appealed to the owners of quad bikes and scramblers not to use these on bogs as the vegetation was tinder dry could ignite with acontact with a hot engine or sparks from an unprotected exhaust could have serious consequences.