Debut single: The Mahers hit the top with Lullaby For The World 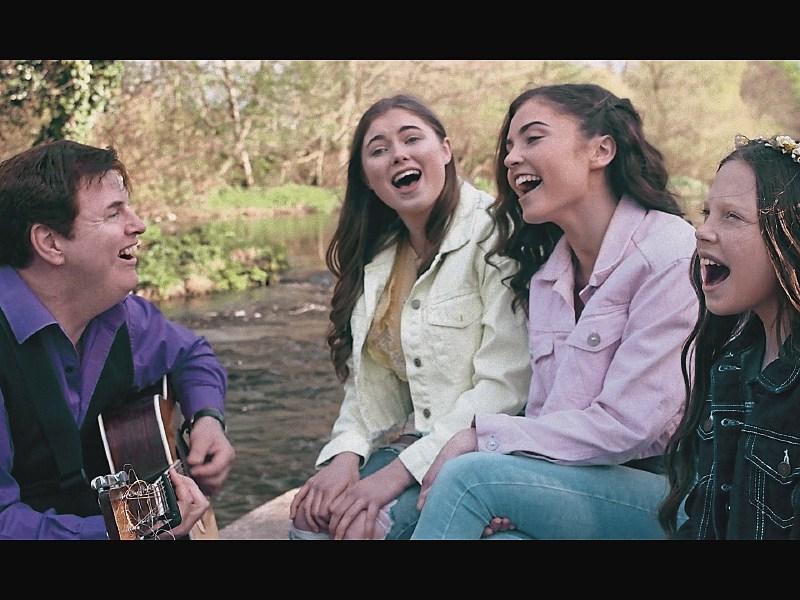 A Newbridge family band is heading for the top of the music industry after their debut single wowed the charts and they signed with legendary singer Whitney Houston’s manager.

The Mahers made up of dad Dave, and his three daughters; Ruby, Stacy, and Robyn, have just released their debut single, Lullaby For The World, co-written by Brendan Graham, well known for the worldwide super-hit You Raise Me Up as well as several Eurovision successes .

The song went to number two in the Irish download charts in the days after its release, something which gives huge heart to the musical family, who live at The Priory in the town.

Dad Dave said: “It is amazing, it really is. To get the chance to work with the likes of Whitney Houston’s manager, Rick Blaskey, is absolutely fantastic. He knows what he’s talking about as he has worked with, shaped and guided the career of an artist who is arguably the best female vocalist ever. So having Rick in our corner, on top of having such a beautiful, thought proving and relevant song is a dream for us.

“The girls and myself see Lullaby For The World as a song that is global and one which belongs to all of us. We feel honoured to be the ones who have the good fortune to record it.

“We’re so exited about this song. The reaction from the people of Newbridge and the wider community in the county has been wonderful; there’s a real sense that the people of County Kildare want to rally round us and champion this beautiful thought proving song.

“It’s an anthem for the world; a better world, one that cherishes and protects our beautiful planet and its resources.”

For his part Rick Blaskey is fulsome in his praise of The Mahers, predicting huge success for the group.

“I always approached launching Whitney as so much more than just launching a new record and I have the exact same felling with The Mahers. I have always been far more excited to work with artists who I believe transcend current genres and trends and who I can see have the widest possible appeal to the biggest audiences. The Mahers have genuine likeability, a unique persona, story and sound and a global market to embrace them”.

Dad Dave, a multi-instrumentalist, features on guitar on the track which sees all four Mahers share vocal duties.

But there’s no doubt that on Lullaby For The World, it’s 12 year old Ruby’s star quality that is blindingly clear. Performing as Ruby M, she lit up the stage during her blind audition on The Voice Kids UK last year, with the result that Will.I.Am picked her for his team.

But Ruby, no more than her sisters Stacy and Robyn, didn’t just take their talent, ‘out of thin air’, as the saying goes. As a child-star himself, Dave won the famous TV show Opportunity Knocks, performing alongside his own dad, his sister Linda, and brothers Eddie and Mick, triumphing before an audience of 25 million.