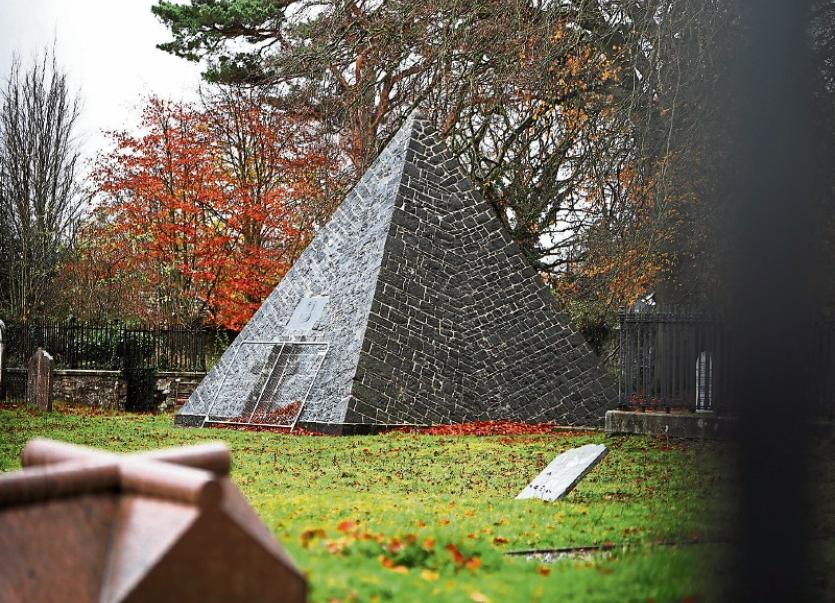 Pyramid in the Maudlins Cemetery, Naas

The pyramids of Egypt are among the most significant structures in the ancient world.

But who knew Naas had two — albeit of a more recent vintage ?

Two pyramid mausoleums — or mausolea to use the correct term — have been restored at the Maudlins Cemetery off Dublin Road.

And it is intended that the finished work will be open to the public.

It is thought the two pyramid mausolea date from around 1840 and one was built by the Burgh family, later known as the De Burghs, who can trace their origins back to Emperor Charlemagne in the middle ages.

Thomas Burgh was born in 1670 and settled in Oldtown, Naas, in the early 18th century.

He was to become surveyor general for Ireland and was responsible for designing one of Ireland’s most highly regarded architectural interiors — the Long Room of the library at Trinity College.

His daughter Elizabeth married Ignatius Hussey of Donore, Caragh, and they adopted the name Hussey Burgh.

Their son Walter Hussey Burgh was to become a prominent p[olitician and and a passionate advocate of free trade for Ireland.

His grandson,also Walter Hussey Burgh, became the High Sheriff of County Kildare in 1839 and married Elizabeth Jane Fitzgerald from County Clare. History records show she bore him a son and seven daughters but died in 1834, aged only 33. She is interred in the mausoleum to the right when you walk through the gateway of the cemetery.

The second mausoleum has no inscription so historians are unsure about who erected it.

It is almost identical to the Burgh structure apart from having a brick lined interior instead of the stone interior.

The Follies Trust, which has conserved 26 structures in Ireland, set about the conservation of the two pyramids. Follies are generally decorative structures, made to be seen and admired.

The FT is a charity with no office or staff and was founded by Northern Ireland woman Primrose Wilson in 2006 after a lifetime dedicated to architectural appreciation and conservation throughout the island of Ireland.

The Follies Trust was formed in 2006 by a group of people who share a passion for a motley collection of unusual buildings which enhance and enrich our landscapes, towns and cities. These structures — or ‘follies’ — are part of the intricate fabric of our history but, because they serve no obvious useful purpose, are too often regarded as superfluous.

The organisation encourages the conservation, preservation, restoration and protection, in their original setting, of mausolea and monuments; follies; grottoes; garden buildings and other structures of particular beauty or historic, environmental, architectural or industrial significance.

The trust does not havbe paid staff but has has raised over £500,000 (sterling) to achieve all this conservation work and to publish its six publications.

The FT always employs conservation professionals and for this project it availed of Blackwood Associates.

“These included various church groups including the Select Vestry and the Representative Church Body and the councillors so that we were able to get the project done,” according to Bridget Loughlin, Kildare County Council’s heritage officer.

Kildare County Council provided in the region of €10,000.

It was a complicated project to complete.

This was clear from the fact that some of the work had to be carried out by a specialist ironmonger based in County Monaghan.

A lot more stone had to be taken down than originally anticipated and because more work was needed the cost exceeded the original estimate of €65,000.

Much of the problem centred around the problems created by vegetation which was both damaging the structures and, at the same time, holding them together.

This followed a competitive tendering process in May/June.

The project, as tendered involved scaffolding both structures, removing ivy and saplings including roots where they had penetrated the structure.

It further entailed raking out cement pointing from the joints and repointing in hot lime.

A limited amount of unstitching of existing stonework was also required. 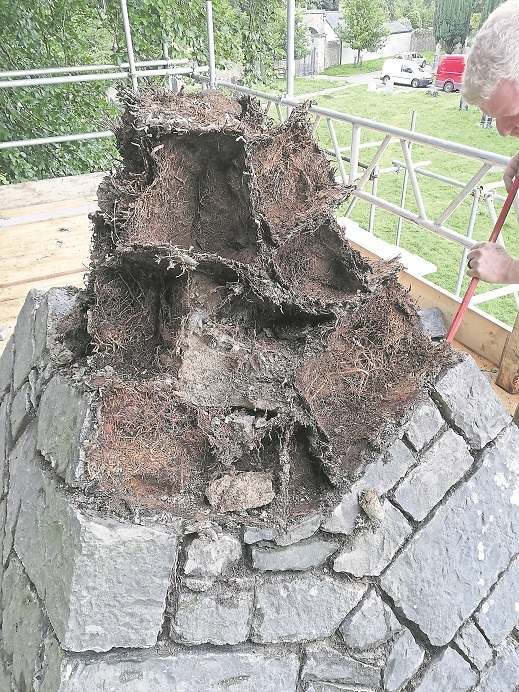 Vegetation is visible as restoration work gets underway

Shortly after work commenced it became obvious that the growth of vegetation behind the stonework was much more extensive than envisaged.

This stone veneer, which is only 75-100mm in depth, had been dislodged from its bedding mortar by roots and soil accumulation.

This had then caused the stonework to first bulge outwards from the structure and then, with the aid of gravity, it had slumped down and away from its original building line.

The FT was faced with a somewhat difficult choice — do the project as tendered or undertake the more extensive work required — in the knowledge that this would mean extra funding was needed.

After discussion with KCC and St David’s Church representatives “we opted to conserve both pyramids in the way that would give them the best future possible and do the additional work required,” said Primrose Wilson.

Ms Wilson added: “When we visited the Maudlins burial ground in 2013 we were blown away by these marvellous pyramids and were determined to do something about their conservation. Erected in the middle of the nineteenth century, Naas is fortunate to have such heritage treasures.”

The work required a high degree of skill and care to ensure there was no subsidence to the structures and no alteration to their final appearance.

“The FT is delighted with the completed work, the fact that the contractor employed an apprentice on the project and that Minister Noonan visited the site on 24 September.

“He expressed his interest in the work and with the finished work also his delight at meeting the skilled craftsmen and apprentice,” said Ms Wilson.

“If the work wasn’t done soon, the mausoleum would have been damaged beyond repair.”

“It was also helpful to be able to avail of the Creative Ireland Project, which promotes the use of traditional skills.

“It was a great project to be involved in and great to see the partnership between various entities and the county council,” said Ms Loughlin of Kildare County Council.