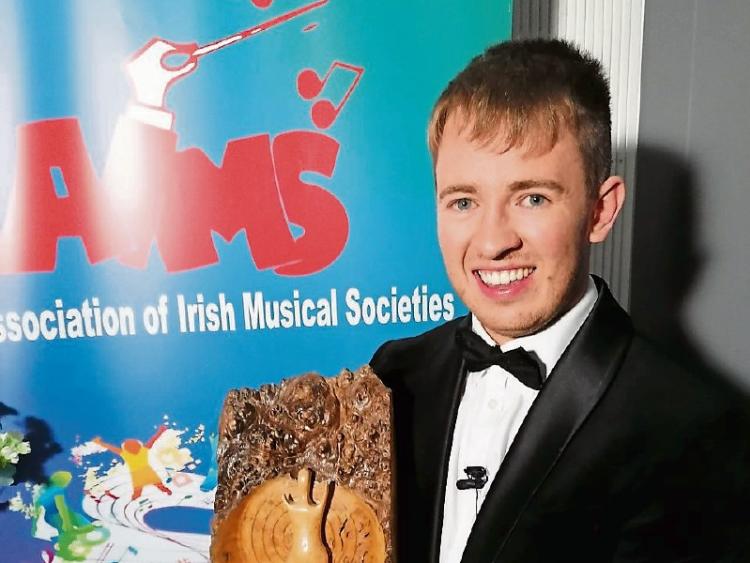 Daniel Ryan with his award

The Odd Theatre Company’s Daniel Ryan has been named the winner of the national Best Actor Award by Association of Irish Musical Societies. The announcement was made at the Association’s awards ceremony on Saturday, September 19, which was held virtually and broadcast online.

Daniel (27), who is from Newbridge, won the prestigious award for his portrayal of Seymour Krelborn, the ill-fated florist’s assistant, in The Odd Theatre Company’s production of the iconic musical comedy Little Shop of Horrors at the Riverbank Arts Centre last November.

During the musical Seymour, its protagonist, stumbles across a new breed of plant he names Audrey II - after his co-worker crush. But as this R&B-singing weed grows, promising unending fame and fortune to the down and out Seymour, the young florist soon learns that his appetite has a cost.

Containing both comedic and tragic elements, and requiring demanding vocal performances, the part is commonly regarded as one of the most challenging in musical theatre. In fact, Ryan is the first person in the near 40 year history of the Association’s awards to take home a Best Actor trophy for the role.

The Odd Theatre Company received an additional honour at the ceremony as Little Shop of Horrors, and its choreographer, Áine Foley, were named runners-up for the Best Choreography Award.

Usually held at the INEC in Killarney in front of an audience of over 1,250 people, the awards were instead screened online from a studio this year, due to Covid-19 restrictions, with nominees video-calling in through Zoom. Presented by Today FM’s Fergal D’Arcy, the broadcast included performances from West End stars such as Rebecca Storm, Brian Gilligan, and Killian Donnelly.

Despite its digital format, Ryan, who also co-hosts Ireland’s leading musical theatre podcast, The Oddcast, was able to receive his award in person as he was appearing on the show in a featured segment with The Oddcast.

Following his win he joined the Association of Irish Musical Societies and American College Dublin 2019 Scholarship winner, Megan Pottinger, for a rendition of one of Little Shop of Horrors’ hit tunes, Suddenly, Seymour, a performance which is available on the Association’s YouTube channel.

“It was an absolutely unforgettable experience”, said Ryan of his win. “I owe so much to my family for the incredible support they have shown me, as well as to the cast and creative team of this spectacular production of Little Shop of Horrors. They created something truly special. I am honoured, not only by this award, but that I could share the stage with so many of my closest friends”.

Director Cian O’Dowd added, “Daniel is a superlative actor, who played Seymour with complete authenticity, commitment, and nuance. It was a simply phenomenal performance. This award just confirms what we already know about Daniel, that he is one of the most talented performers in Irish musical theatre.”

The Odd Theatre Company is an amateur theatre group from Co. Kildare, whose members hail from throughout the county. The company’s debut show, The 25th Annual Putnam County Spelling Bee, was the Irish premiere of this celebrated Broadway musical, which was followed by the Neil Simon farce Rumours, and acclaimed rock opera Rent in 2018.

The group produced the killer musical comedy Little Shop of Horrors at the Riverbank Arts Centre, Newbridge, from 28 to 30 November 2019.