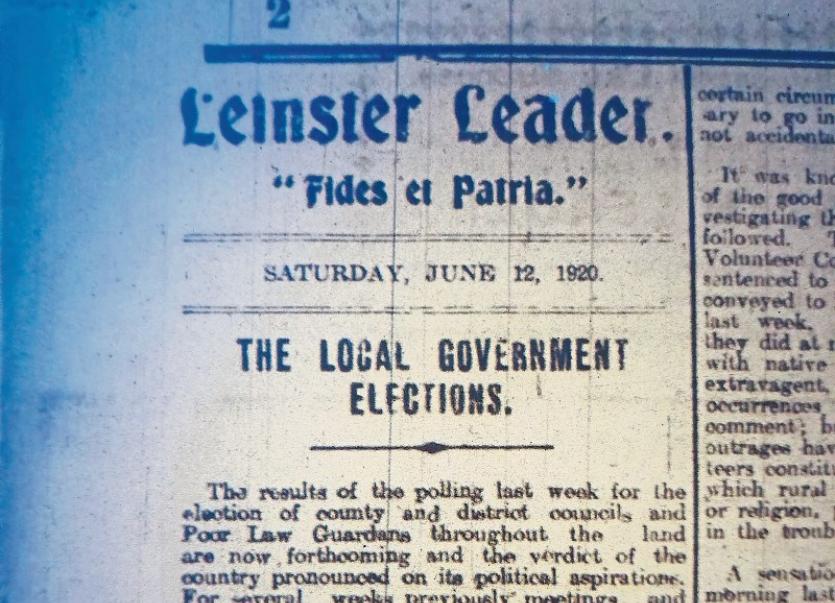 The critical year of the independence struggle was 1920. It began with the urban elections in January and continued with offensive actions by the IRA which brought new, more ruthless, players — the Black and Tans — onto the scene.

Clearly, the Act was designed to undermine Sinn Féin following its resounding victory in the 1918 General Election. However, it did not work. The urban elections gave Sinn Féin control of nine of the country’s eleven corporations.

In the local elections held in June, Sinn Féin won control of twenty-nine out of thirty-three county councils and 172 out of 206 rural district councils. The Dáil cabinet now had the opportunity to establish a dual-power structure as all newly elected councils with a republican majority were asked to declare their allegiance to Dáil Éireann.

Of the twenty-nine members elected to Kildare County Council, twenty-eight were Sinn Féin or Labour — the Labour Party were strong supporters of the republican ideal.

The following resolution was proposed at the new council meetings: ‘That this Council … at a duly convened meeting hereby acknowledges the authority of Dáil Eireann as the only elected government of the Irish people, and undertakes to give effect to all decrees duly promulgated by the said Dáil Eireann in so far as same effects this Council.’

At the first meeting of the newly elected County Council of Kildare, held in Naas Courthouse, it was decided to pledge allegiance to Dáil Eireann and to repudiate any claim by the British government to legislate in Irish affairs.

Both were fluent Irish speakers and the native language was much in evidence during proceedings.

It began by some of the members answering the roll call in Irish, continued in resolutions designed to promote the spread of the language and culminated in the requirement that the minutes should be signed in Irish.

At the beginning of the meeting two youths had made herculean efforts to fly the tri-colour from the flagstaff of the court-house which had heretofore flew the Union Jack.

When the motion to delete the after the Rising resolution of 1916, which appeared on the minutes, came up for consideration one member called for a scissors, another suggested that the resolution should be torn out and burned.

A third member, who took part in the Rising that was condemned in the offending resolution, suggested that there was no need to deface the minute book, and that it would be sufficient to write the word ‘rescinded’ over the minute so dealt with in red ink. This suggestion was adopted.

At the weekly meeting of the Naas Board of Guardians, held on 30 June, on the motion of Michael Smyth (Athgarvan), and seconded by John Lee (Broadleas, Ballymore-Eustace), the resolution in the minute book condemning the Easter Rising of 1916 was also deleted.

The interest of the new members of the county council in the Irish language was demonstrated in the publication of the council’s proceedings in both Irish and English in the Leinster Leader.

Naas Urban District Council and Newbridge Town Commission showed similar interest in the language in the autumn of that year when both bodies, dominated by Sinn Féin, proposed that the names of their towns should be changed to the Gaelic forms.

The proposals were adopted at the quarterly meeting of the County Council on 22 November 1920, and henceforth the towns were to be known as Nas Ni Riogh and Droichead Nua.

Sinn Féin was now in control of the administrative machinery of the entire county, as it was in most counties throughout the country.

However, it was a bittersweet victory. The elections in January and June 1920 were the last thirty-two county all-Ireland elections.

A year later the country would be partitioned.