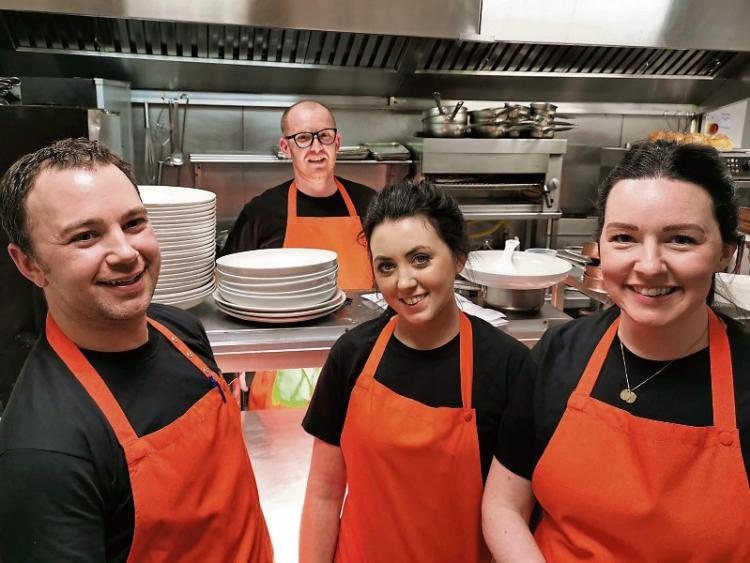 Prosperous native and chef, Caomhán de Bri and his fellow chef, Nathan Dimond, were busy on the evening of March 4.

The two chefs, along with their respective wives, Carla and Rebecca, were beginning a new restaurant venture in north Kildare.

Family and friends had headed to Celbridge to taste what will be on the menu for customers at the new venture.

The pair have taken over the former Canteen premises on the Main Street to open what Caomhán described as a pop up restaurant, Ginger's BBQ.

Caomhán said that they will try to the new venture for a short time at least, to see how it is working.

Born, bred and buttered in west Kildare, Caomhán, was schooled in Prosperous, Clane and Blessington, before becoming a chef and heading to other climes to work, including France, London (Gordon Ramsey's Maze) and Wexford.

He did not see too much of Gordon Ramsey during his spell there but the experience was good.

He now runs his own catering company and is joined by Nathan, who was head chef in Lyons, up to relatively recently. “We were talking about setting up Ginger's BBQ for a good while,” says Caomhán.

On March 4, their burger went down a treat with many.

It comes from a herd of Japanese wagyu cattle, located in Antrim. “It is the first carbon neutral herd of cattle in the country,” said Caomhán, who lives in Enfield with Carla.

Gingers BBQ will do lunches from Wednesday to Saturday and dinners from Thursday to Saturday. They are on Facebook and Instagram or GingersBBQ@gmail.com

Monday and Tuesday is recovery day for the team.

Nathan, who is from the The Valleys in Wales and Rebecca, originally from outside Nenagh in Tipperary, now live in Nurney.

Rebecca works with Helen McAlinden Fashions in South William Street, Dublin, when not minding their children, Georgia (4) and Theo (2).

Carla, originally from Leitrim, studied biomedical science in Maynooth University, followed up with a Phd and now lectures in biology in TU Dublin.