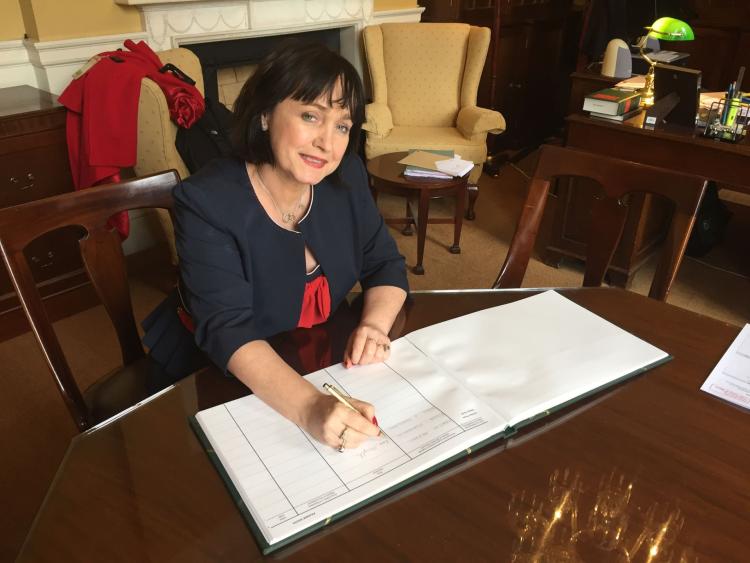 Former Kildare South TD, Fiona O'Loughlin, signing the register for the 32nd Dáil in 2016, at the Clerk of the Dáil's office.

Fiona O'Loughlin, former Fianna Fáil TD for Kildare South confirmed she has been nominated for the Seanad.

"Today I wish to announce that I have been nominated to run on the Admin panel for the Seanad".

The Newbridge based politician stated previously she still felt she had much to give as a public representative, having served as a county councillor previously, and four years as a TD who had contributed to several Oireachtas committees, especially in the areas of disability, equality and education.

Speaking previously to the Leinster Leader after the initial shock of the election outcome, Ms O'Loughlin stated so many people contacted her, to encourage her to stay in public life, along with FF colleagues and party leadership.

“I have constituents depending on me to follow through on issues but now I don't have the same access or mandate to proceed with those queries. However, I can continue to give advice and what procedures/routes to take. While last month's defeat was difficult, I'm not a quitter and my party leadership is clear, they want me to stay involved.

"I have now been nominated by the Alzheimers' Society of Ireland, supported by the Fianna Fáil party", she noted.

"I look forward to traversing the country over the next few weeks, engaging with public representatives, listening and reflecting.

"This day four years I became a member of the 32nd Dáil, the proudest day of my life.

"During those years, I had the privilege of serving the people of South Kildare throughout the constituency (through my three offices) and in the Dáil Chamber. I had hoped it would be for longer but that was not to be".

Ms O'Loughlin lost out on the final count to Independent election candidate, Cathal Berry. Only 300 votes separated the two after the elimination of Cllr Mark Wall (Labour) who polled extremely well, and the surplus votes of elected Patricia Ryan (Sinn Féin).

"Wish me luck!" concluded Ms O'Loughlin on this morning's announcement.