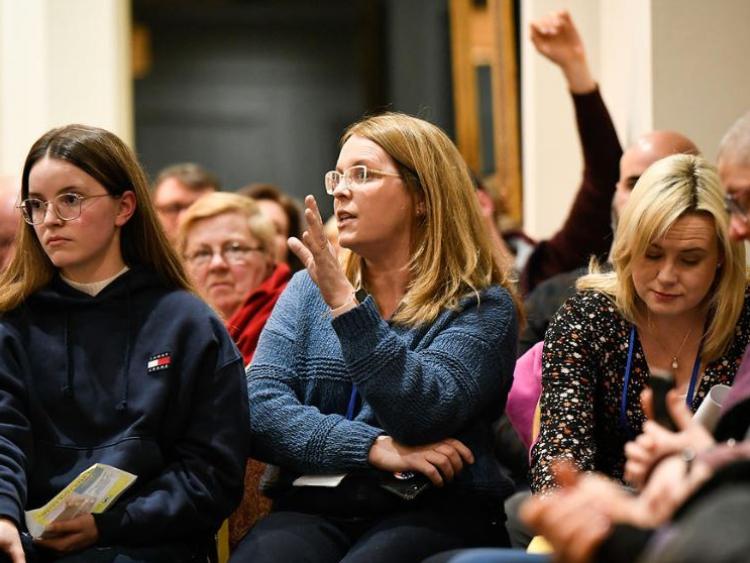 A lively meeting was held last week in Blessington with election candidates in advance of the general election on Saturday PIC: Liz White photography

Irrespective of what candidates were elected to the 33rd Dáil to represent West Wicklow last Saturday, a local pressure group intend to hold all elected deputies to their commitment to working for a community pool for the constituency.

Among the candidates who addressed the meeting was poll topper, John Brady of Sinn Féin, Cllr Jennifer Whitmore (Social Democrats/elected), Andrew Doyle and Billy Timmons of Fine Gael who were not returned and Stephen Donnelly (Fianna Fáil, who finally scraped across the line to secure the last seat for the constituency).

“We had a huge attendance with other issues such as the N81, Crooksling, health and mental health also raised. Fifty questions were submitted by the audience in advance and we whittled those down to 35 but didn't get through them all on the night.

"We didn't spend enough time talking about the environment and neither was the 8th Amendment addressed.

“However, it was made clear to all the candidates that we expect the elected five TDs to work together on our behalf, for the people of West Wicklow.

"We expect them to commit to a meeting in a month's time with our representatives, and members of Wicklow County Council and Water Safety Ireland. We want to get this project moving!” she said.

After the initial meeting, Ms McCormack stated they wanted to establish a meeting every two months to progress the project.
“A lot of promises were made at our meeting last week,” she added. “And we intend to hold them accountable!”