GENERAL ELECTIONS 2020: accountability strikes a chord with the electorate

On the canvass with Cllr Fiona McLoughlin Healy (IND) 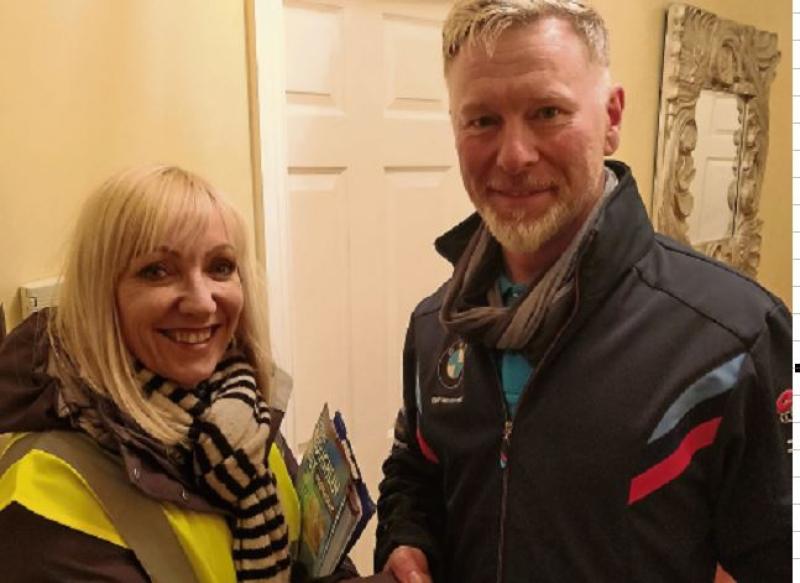 Judging by the response on the doorsteps last week in Wellsley Manor, Newbridge, the consistent calls for accountability and transparency by Independent Councillor Fiona McLoughlin Healy, who was re-elected to the Kildare-Newbridge Municipal District last year, regarding publicly funded boards is striking a chord with voters.

There’s certainly no shortage of supporters willing to campaign with the Kildare South candidate. Twenty two were out canvassing last week, ranging in age from 15 to 76 years, with an average of 18 per night.

“I thought long and hard about running,” said Ms McLoughln Healy. “Politics can be a nasty business but my decision was based on the mandate I received in the local elections. I feel a real duty to raise issues and to continue my work in fighting for transparency and accountability in governance bodies.”

She doggedly stuck to her criticism of the lack of accountability in the Kildare Wicklow Education Training Board (KWETB) finances. As she began her canvass, Cllr McLoughlin Healy cited the ongoing overspend on the children’s national hospital and still no hospital; the disgraceful shennanigans of the FAI, and as yet, no one being held accountable.

With a blistering knowledge of facts and figures, in the space of a few hundred metres, she spoke of the €20 billion in the national pension fund which was drawn down to bale out the banks after the collapse of the Irish economy.

“Now that the banks are back in profitability, this money should be reinstated to the National Reserve Pension Fund. Look at the scandalous overspend in the children’s hospital project, €2bn estimated spend and still no hospital. You know Colm McCarthy the economist stated this debacle was ‘scandalous but routine’ here in Ireland”. Companies tender for projects and are awarded contracts on costings submitted, she claimed, but when costs are over run, they look for extened time and more money — “but no one is held accountable!”

She continued “The children’s hospital project was sold on a ‘it’s this or nothing’ — I don’t believe we know the full story even yet! People now understand why I’m constantly harping about transparency and accountability – because it’s money out of their pocket!”

The first householder who answered the knock and recognised Cllr McLoughlin Healy enthused: “You’ll be getting at least four number one votes here. We identify with your goals and calls for transparency and good governance — it’s the foundation for a fair society.”

The householder noted she had previously voted for main parties but would no longer be doing so. “I’m canvassing on your behalf!” she told the councillor. “Accountability is everything”.

The woman’s husband then raised the issue of commuting and having to drive to Sallins train station which is so much cheaper than just taking a train from Newbridge, the station being a mere kilometre from his home.

“It’s not fair that Newbridge is not on the commuter loop and it is much dearer to travel from here than to take the train from Sallins to Hueston station".

Homeowner Andy Cross requested a chat with Cllr McLoughlin Healy and put it straight up to her: “What are you going to do for me?” He was, he claimed, familiar with her work in recent years and again, transparency and good governance was discussed. The afore-mentioned issues were cited, along with more robust governance controls to prevent cost overruns on major projects; strict criteria for appointments and duration times for board members on publicly funded bodies, strengthening of the Freedom of Information Act, etc.

High on her agenda is the restoration of the state pension to 65 years of age, amendments to the tax credit base to benefit the lower paid, health and housing changes and notably, better regulation of the Approved Housing Bodies (AHBs).

“I have worked with residents of the AHB in Newbridge, Kildare town and Monasterevin to expose on a national level the governance issues arising in their housing associations. This is a local and national issue”.

Again, with a blistering pace, she listed a number of local projects she would like to see furthered relating to youth and community amenities, promoting our natural environment (Greenway and Blueways Project), greater public transport for South Kildare commuters, cycle lanes and infrastructures plus changes in tax policies for SMEs and the regeneration of rural towns and villages.

This journalist had writer’s cramp after only an hour on the canvass trail with Cllr Fiona McLoughlin Healy. It is as an Independent candidate she stands, and to represent South Kildare as an independent voice in Dáil Éireann, "fully accountable to my constituents and supporters".

She concluded: "I’m not making idle promises on what I might do; vote for me on what I have done and I am proud of what I have achieved as an Independent".