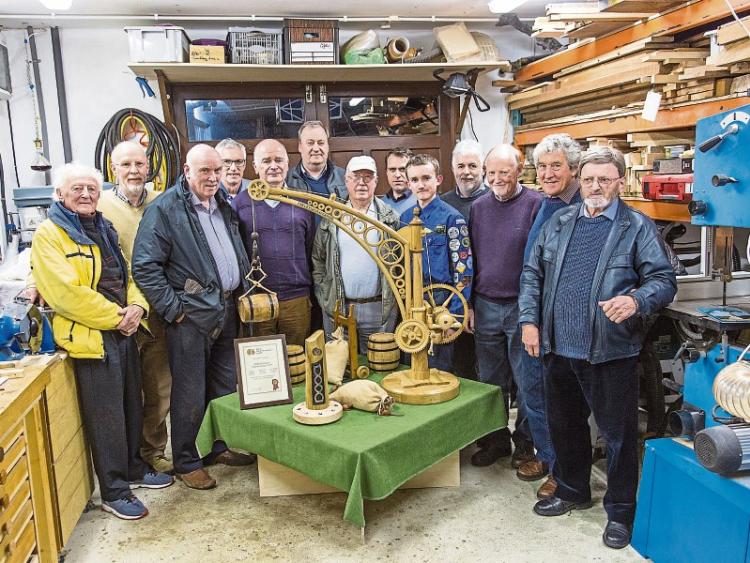 A reproduction of the crane at the Canal Harbour in Naas has won a craft award.

The competition is held annually at the national seminar and the theme for 2019 was a crane to be made within given dimensions.

The members of the Midlands Chapter made a scaled, working model of the crane located at the harbour in Naas. Fifteen members were involved in the project over a period of nine months. The MC members are drawn from County Kildare and the surrounding areas. The chapter meets on the second Monday of the month at the Carpentry Store, M7 Business Park, Naas.

The crane at the Canal Harbour dates back to the late 1700s when the Naas canal and harbour were built. The crane was manufactured by Fawcett & Company in Liverpool. When designing and making the model of the original crane, the woodturners incorporated a broad range of woodturning skills and a great deal of innovation. The finished result reflects the original crane while at the same time showcases the skillset of the members the Midlands Chapter.

Mr Quirke said it is hoped the crane will be put on permanent display in Naas and one possibility is at the new library.

“We may put it on temporary display somewhere in the meantime if we can find a suitable location. Our preference would be to have it in the new library if the people in charge deem it as appropriate,” he added. Anyone interested in joining the Midlands Chapter will find contact details at the Carpentry Store.

New members are always welcome. Information on the Irish Woodturners’ Guild can be found at www.iwg.ie